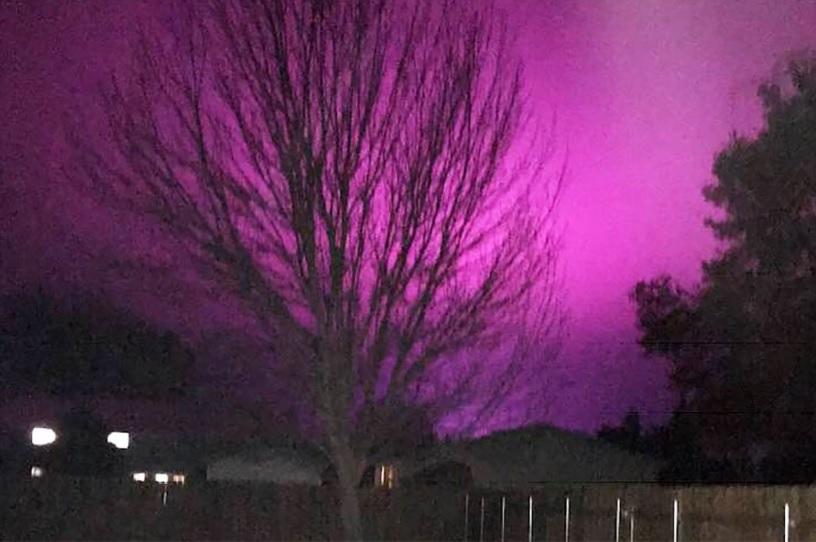 Everyone has seen a beautiful sunset at least once in their lives, and when someone tries to tell you about how the sky was "so colorful" it is easy to brush off as an exaggeration. But when residents in Finley, Washington began reporting the sky had turned purple and had the photographs to prove it, the strange phenomenon began to draw some national attention.

Local news describes the sight as something out of "The X-Files" and used words like "pink and purple glow" to describe the night sky near Tri-Cities near Washington state's eastern border. When they said purple, they meant it. This is no blend of orange and yellow and red that most typical sunsets emit, this was a pure royal purple illuminating the sky as if it were the sky itself that had changed color.

Soon, more residents began posting pictures showing the glowing purple radiating in the night sky. Could it have been alien contact or emissions from the nearby Hanford nuclear site? Whatever it was, residents wanted answers. Alisha Dickenson, a local resident said, "We thought maybe the bar that's out there was having some kind of party."

The purple lights lit up the sky on Sunday night but it turns out the reason behind the strange phenomenon wasn't a party or anything otherworldly. "We were just driving home from the store, and we saw just a bright purple light in the sky, and we couldn't figure out what it was," Dickenson added. "It just made me think of the movie 'Hocus Pocus' where they have some spell and it makes a bright light in the sky."

Dickenson was so curious she investigated the source of the light itself driving until she found it. It turns out the reason for all the purple light was green, as in marijuana. "I knew the grow was out there, but I didn't know it had those bright lights on it like that," she said. The light's origin turned out to be a legal cannabis-growing facility called "Legacy Organics".

The group says their LED lights give the plants much needed light to grow, especially in cold seasons like fall and winter where less sunlight is available. Ever since the legal marijuana business began booming in Washington, the size of the marijuana operations has been increasing. As for the local residents, they won't have to worry about the eerie purple glow for much longer since the operation said their facility is still under construction and the lights will eventually be covered.

They would have had to angle the lights up to the sky to do that, but yeah given the average grow op can be about 5-10klm/m² in human terms, so it's plausible.

That's actually a really shitty spectrum for growing weed but whatever, idiots and their money will be parted.

The other thing that lights skies up like that (without clouds) is scalar weaponry tests and nukes and aurora to a much lesser extent.

Their 24/7/365 collection of reporting sites shows NO radiation increases.

H8chan youre wrong, the one layered tarp over the construction allowed the black lights to glow through, you dont need to point the lights up considering there are so many of the lights, if you saw it for yourself you would understand, also, those idiots are making more money than you 😘