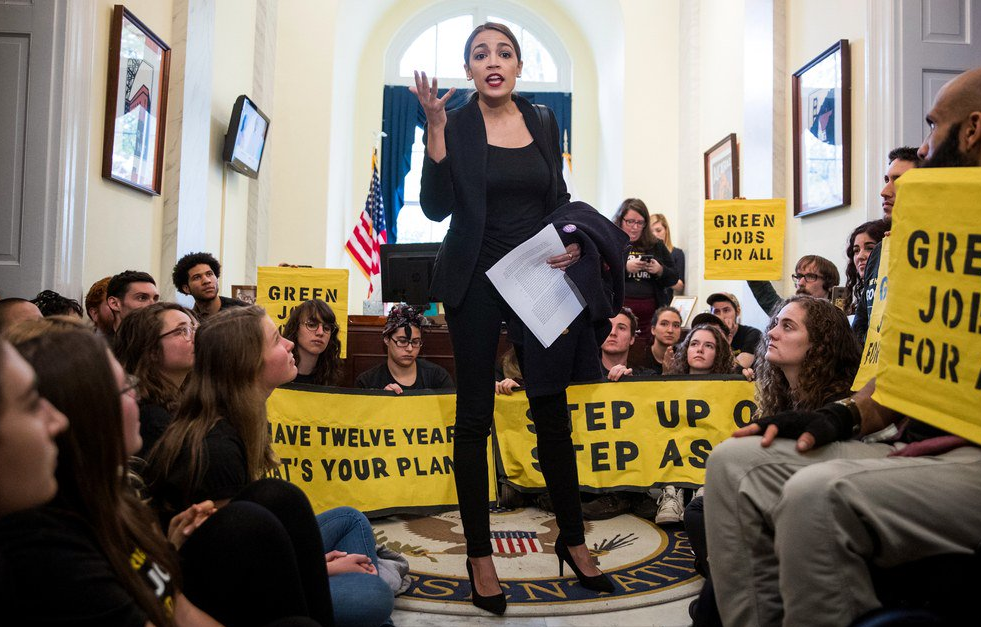 Infighting anyone? The Democrats were very glad that their progressive far-left side fell in line during the Midterms, but now that all has been done and settled, they pretty much need their youngsters to play nice and rollover for the next two years.

A first sign of this attitude was made pretty clear when House Leader Ms Nancy Pelosi sent out a letter to each member of the Democratic caucus, asking for re-election as speaker and writing: “my vision for the next two years is to restore the House to the role it should have as a strong and independent voice for the American people, and maximize the ability and the creativity of our entire Caucus.”

However, having seen the treatment their former idol Bernie Sanders got during the 2016 presidential election from the Democratic powers that be, the far-left representatives were keen on taking a different standpoint this time round. The majority that Democrats hold in the house might be more divided that it appears to be.

A sight rarely seen as it shows that there is no clear unity within the Democratic party on this issue and the progressive side fears Ms Pelosi’ will yield to business lobbyists as soon as she is re-affirmed as House leader.

In the end, Capitol Police stunningly arrested 51 protesters for unlawfully demonstrating outside Pelosi's office in the Cannon House Office Building. The arrests began a few hours after the demonstration began as protesters refused to leave the area. By that time, Ms Ocasio-Cortez had left the premises.

Meanwhile, Democratic leader Ms Pelosi stated she “welcomed the protest” and called on the police "to allow them to continue to organize and participate in our democracy.”

<blockquote class="twitter-tweet" data-lang="en"><p lang="en" dir="ltr">Socialist Alexandria Ocasio-Cortez cozies up to the Democratic establishment on her first day of freshmen orientation, says that she &quot;admires&quot; Nancy Pelosi.<br><br>Ocasio-Cortez: &quot;Really what I’m here to do is, uh, is just to support the folks who are here&quot; <a href="https://t.co/tExsuSFOeV">pic.twitter.com/tExsuSFOeV</a></p>&mdash; Ryan Saavedra (@RealSaavedra) <a href="https://twitter.com/RealSaavedra/status/1062427271082913792?ref_src=twsrc%5Etfw">November 13, 2018</a></blockquote>

A statement sent out by her office afterwards noted that: “We are inspired by the energy and activism of the many young activists and advocates leading the way on the climate crisis, which threatens the health, economic security and futures of all our communities."

"I have recommended to my House Democratic colleagues that we reinstate a select committee to address the climate crisis. House Democrats ran on and won on our bold campaign for a $1 trillion investment in our infrastructure that will make our communities more resilient to the climate crisis, while creating 16 million new good-paying jobs across the country.

does Ocasio realize that POTUS has already created the jobs, so there will be NO DEM taking ANY CREDIT FOR ANY JOBS CREATION, THAT IS ALREADY WON AND DONE,,,POTUS DID IT!

Ds know ya cant control Socialism once ya open that can of worms. It spreads an infects like cancer.

God that voice is like fingernails going across a chaulkboard.

And she disappeared before she could be arrested. She's a COWARD.

She left her comrades hanging as she snuck out, bad commie

I think they MOST likely warned her the police were coming, that's the way Dems do things. They make her feel like they're protecting her when in reality they're controlling her.

Ocasio is the start of the most dangerous things that can happen to America–A socialist. 42280 is right, "socialism is like a can of worms, once opened, spread like a cancer…"

Bottom line, Ocasio is ignorant, disrespectful and a menace to society. This is the part of her the Democrats love. They 𝙇𝙊𝙑𝙀 chaos…

3 namer and a psycho hag. Let the shit show start!

Wow so much hatred for the well intended and youthful citizens.

If you have hate in your heart, let it out!

Don't worry you will be gone soon and the world shall be a better place for it. We are the future, your time is(almost) done, thankfully

Why is she even talking about money? She doesn't even have a job, can't afford rent, will soon be mooching off taxpayers to work out of state. Whoever voted for her get whatever she gives them and I have a feeling they don't like it.

This is the zombie running the zombies. This bitch and Nancy CraCra Pelosi. This shit show will be good for some laughs!

Come on idiots!!! Even the whole prostitute knows she can't take another 2 years of this… she can't make a whole sentence anymore without having slime drool out of the corner of her mouth, can't even hold her teeth in place… Occasional Cortex is her girl… this is a play for the clueless… Would't surprise me if the Occasional cortex has been sleeping with the old hag… Imagine that…

Haha, Ortiz lacks critical thinking, so much that she cant start her job in DC because she is “3 paychecks short of getting an apt and needs an advance…

The devil is in the details.

Seriously, the idea of green energy vs. being in constant wars in the Middle East seems like a great aspiration. I doubt the Deep State will ever let it happen though.

Cortez is Stupid. How did she ever graduate from BU? She dumbs down every time she opens her lip sticked mouth.