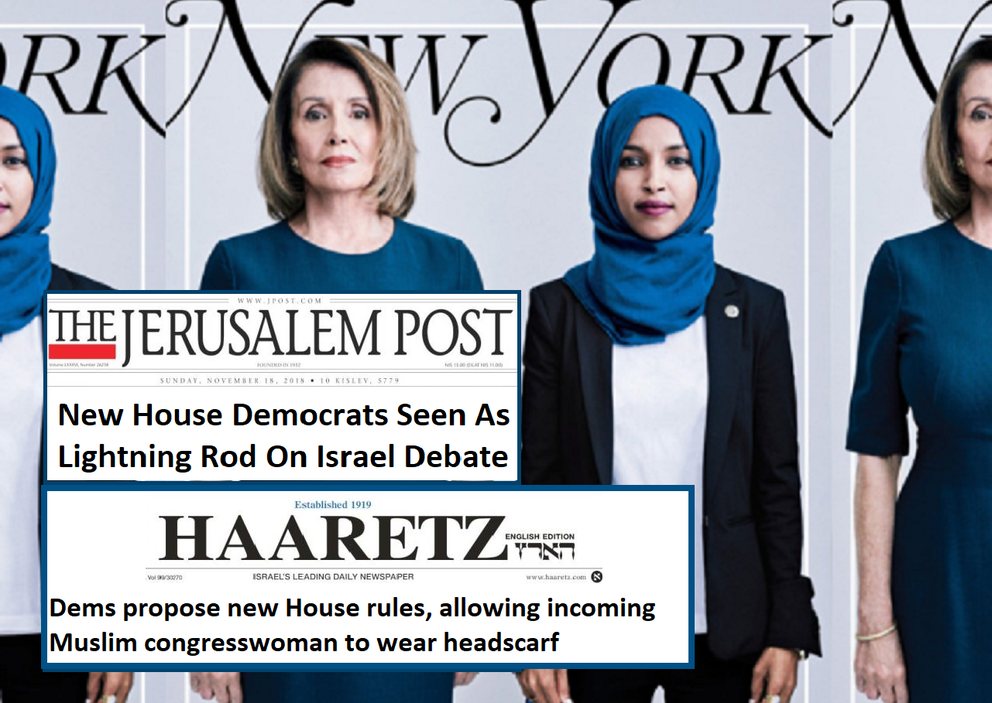 The Israeli press showed their discontent that 1 Democrat congresswoman was able to change a 200-year old rule forbidding religious headwear even before she is sworn in after the details of the House Democrats draft rules package became known.

The document shows how the Democrats plant to govern the chamber when they take over the majority in the new Congress next year and was published last week Thursday. Buried deep inside is a change of the headwear rule, allowing the Representatve-elect Ms Ilhan Omar of Minnesota to enter US Congress wearing a hijab.

Proposed speaker of the House, Ms Nancy Pelosi, seems to have made quite the trade-off with the progressives already in what is even her draft proposal as one of the rules that are supposed to be changed, allowed Ms Omar (who is Muslim) to clarify the 180-year-old rule against wearing hats on the House floor and change it in order to allow for religious headwear, including headscarves such as the hijab.

Related coverage: <a href=" http://thegoldwater.com/news/42653-Democrats-Push-For-US-Congress-To-Allow-Hijabs"> Democrats Push For US Congress To Allow Hijabs</a>.

Although the Democrats explained that it would also work for ‘medical headwear’ as one of their representatives is a cancer survivor, the Israeli press focused only on the change which was demanded by Ms Omar.

<blockquote class="twitter-tweet" data-lang="en"><p lang="en" dir="ltr">Hats have been banned from the House chamber for 181 years. Under a new proposal from Nancy Pelosi, Jim McGovern and member-elect Ilhan Omar, the rule would be relaxed to allow religious headwear, like a hijab or kippah. <a href="https://t.co/RJZqrzmzSk">https://t.co/RJZqrzmzSk</a></p>&mdash; Kyle Griffin (@kylegriffin1) <a href="https://twitter.com/kylegriffin1/status/1063990174869114880?ref_src=twsrc%5Etfw">November 18, 2018</a></blockquote>

The US’s strongest ally in the Middle East fears that the proposed change is only a forebode of things to come as the Democrats allow more progressive ideas which favor the ‘Palestinian opinion’ in their midst.

Case in point was highlighted by Ms Linda Sarsour, a Democratic Palestinian-American civil rights activist who claimed earlier this week that any controversy surrounding Ms Omar (who has spoken against Isreal in the past) is a direct result of a dual stance by “folks who masquerade as progressives but always choose their allegiance to Israel over their commitment to democracy and free speech.”

Ms Sarsour, one of the leaders of the Women’s March, posted a campaign on Facebook called #IStandWithIlhan, where she urges people to sign a petition and post supportive messages about Omar and free speech.

The hijab is a giant middle finger in America's face!

Its BS and shows that democrats dont give 2 shits about the US at all.

Hijab is a religious garb. "Congress shall make no law respecting an establishment of religion"

They didn’t relax the law to allow Jewish men to wear their headgear!! Why now? So they won’t be seen as islamaphobic?? Seriously though, this PC crap where the muslim faith is concerned is going to come back and bite us!!

So many life long democrat`s have gone. Now with the stunt on wanting to nuke citizens added to this hijab stunt the rest good un-brainwashed Dems will leave..

All the Democrat`s will have left are the evil, the criminals & those which seek power above all else.

Now that the democrat`s have so openly sided with people, religion`s & culture`s that are themselves non tolerant. We can see the face of the new democrat party plainly

Just think with a clear mind for once. How many faith`s teach conversion or death? That relish in the pain of it`s enemies? That sacrifice life willingly. Just for some perceived gain, whether real or imagined?

How can a violently intolerant faith ever bring about peaceful solutions? It can you say? Well in a sense yes it can..

With the total subjugation of all, yet even then it will still prey upon itself. The brutality is plain for all to see.

I believe the time has come to overthrow these traitors to humanity.

Don`t get me wrong most all the politicians & leaders of men are crooked. It is just some groups are quite openly blatant, in showing whom they serve.

Jewish hubris knows no bounds. They actually think they ride herd over a party of screaming cats

why you hate islam so blindly? be careful with your words.. you insult the words of Allah. the punishment for what you do is death.

america must turn to islam the one true religion. why you hate islam so blindly? be careful with your words.. you insult the words of Allah. the punishment for what you do is death.

Our dogs of war will herd the muslims to the democrat`s pig farms (as those pigs are used to the taste of human flesh). There they can convert the swine into food… OR vice versa.

God please let us have Thomas Jefferson back, just for a few months.