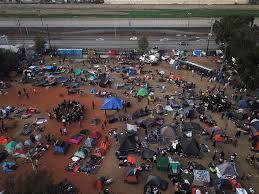 During a press conference Thursday, Mayor Juan Manuel Gastelum asked international groups like the United Nations to step in and help the city deal with the influx of migrants, amid a lagging response from the Mexican federal government, which he accused of neglecting their responsibilities to deal with migrant and immigration issues.

“They have categorically omitted and not complied with their legal obligations,” he said. “So we’re now asking them and international humanitarian aid groups to bring in and carry out humanitarian assistance.”

“For years now, large numbers of migrants have flocked to Tijuana in their quest to seek asylum at border ports of entry along Southern California.”

“But the pace of arrivals stepped up this year with the organization of several migrant caravans, whose intended destination has been this border community. Since last week, more than 5,000 migrants who took off from Honduras in October arrived in Tijuana, raising tensions with local residents and straining government services.”

According to the federal government, up to 10,000 migrants could end up in Tijuana.

The majority of the caravan are camped out on a dirt baseball field at an outdoor sports arena and underneath bleachers.

The city opened the complex after their other shelters reached capacity.

Local businesses have complained of migrants panhandling and stealing.

The municipal government estimated it has spent nearly $27,000 daily to house and care for the close to 4,700 migrants currently in the city.

President Trump tweeted: The Mayor of Tijuana, Mexico, just stated that “the City is ill-prepared to handle this many migrant, the backlog could last 6 months.” Likewise, the U.S. is ill-prepared for this invasion, and will not stand for it. They are causing crime and big problems in Mexico. Go home!

<blockquote class="twitter-tweet" data-lang="en"><p lang="en" dir="ltr">The Mayor of Tijuana, Mexico, just stated that “the City is ill-prepared to handle this many migrants, the backlog could last 6 months.” Likewise, the U.S. is ill-prepared for this invasion, and will not stand for it. They are causing crime and big problems in Mexico. Go home!</p>&mdash; Donald J. Trump (@realDonaldTrump) <a href="https://twitter.com/realDonaldTrump/status/1064227483187318784?ref_src=twsrc%5Etfw">November 18, 2018</a></blockquote> <script async src="https://platform.twitter.com/widgets.js" charset="utf-8"></script>

The Democrats don’t believe the Caravan is a problem at all.

What's interesting about so many of the people you see talking on television is not just that they tell you things that they know are not true, they do, they lie regularly and they shade the truth even more than that.

You, of course, knew that. It’s obvious. What's amazing is how they do it in unison.

One will say something false and then within what seems like minutes, all the others are saying it to, the same thing.

Sometimes word-for-word, it's like they're all texting each other in commercial breaks.

Maybe they just know instinctively what the latest Democratic Party talking points will be.

We could give you endless examples of this, but here's the most recent one.

In the days since last week's midterm elections, all the geniuses on cable have simultaneously decided that the migrant caravan marching toward the United States is a mirage. It’s not real; it never has been real, it was always a fake threat created by unscrupulous right-wing politicians to win the last election.

Watch the video and watch them sing that tune in perfect harmony.

“This was never an urgent issue. These people were a thousand plus miles away from the border.

To also further your point, if you are so concerned about invaders and very bad people, wouldn't you be on the border today instead of your Secretary of Defense?”

“They've been running on an imaginary Caravan”

“ The President talked a lot it could stop talking about the so-called Caravan heading toward the border.”

“ This stupid f-ing Caravan.” You know it's a lie that this

Caravan is a problem of that magnitude.”

The so-called caravan, the imaginary caravan, that's what Jeff Zucker told them to say.

Too bad we now have pictures. Reality is the enemy of propaganda and the reality on our southern border tonight is that a large number of migrants from that Caravan are now masked just south of San Diego and

they're trying to get into this country.

In the meantime, those same people are overwhelming city services in Tijuana and causing a crisis there.

The people from the caravan are doing all of this because they exist, they are a physical reality no matter what they're telling you on CNN.

She believes that anyone worried about illegal immigration must be a dangerous racist and that's why she just compared federal law enforcement officers to the Ku Klux Klan.

The Klan was a what we would call today a domestic terrorist group.

Why why why would we call them domestic terrorist group?

Because they tried to use fear and force to change political environment.

And what was the motivation for the use of fear and force?

Based on race and ethnicity.

Right. Are you aware of the perception of many about how the power and the discretion at ice is being used to enforce the laws and do you see any parallels?

I do not see any parallels between…

I do not see a parallel

American citizens trying to protect their country's borders upholding laws passed by our democratically elected Congress are somehow like the KKK.

It seems like an especially stupid and vicious thing to say it's cruel really.

How would you feel if you were a nice officer or your brother was? Can you imagine throwing out that kind

of slander at your fellow Americans just for doing their jobs?

You'd have to be a self-righteous person to talk

like that. Harris is, so were a lot of them.

Listen to Senator Sherrod Brown of Ohio, a man who advocates for unrestricted late-term abortion, explain that he's on Jesus's team and you aren't.

We understand the value of little people, Senator Brown says.

Really, do you? How about the millions of American workers whose wages haven't risen in decades thanks in part to mass immigration, or how, by the way, since we've were on the topic, how about the people of Tijuana?

The caravan came north because they knew they'd have a shot of getting into this country.

Democrats told them that. They encouraged this whole thing from the very first day.

Violence is broken out; people have been hurt, dozens of migrants never even made it to the border, by the way.

They are still missing, presumably kidnapped by drug cartels, the human cost has been very high.

Democrats are not talking about that cost somehow, it's not interesting to them, won't win them elections.

We can’t allow these migrants to come to invade the US. There are legal ways to enter our country and we must demand they adhere these.

hollywood superstar elitist, you know the ones who tell the rest of the country what they think about social issues, this is your moment to shine…. hello, hello… is this mic on???

We should not let any of them into our Country. This is an invasion and should be handled by our military.

The media is losing their grip on the narrative. It's as if everyone knows everything they say is a lie. My question is, how do they stay in business?