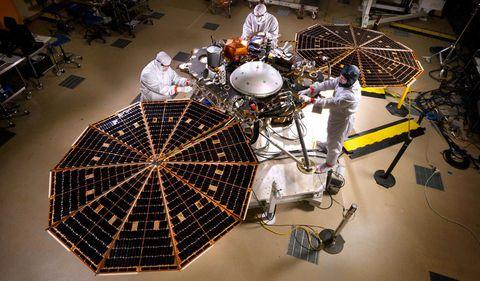 US Makes History as NASA InSight Spacecraft Lands on Mars

The United States of America has historically broken numerous records in terms of travel and flight, with the first and only nation to land a man on the moon has now landed on the planet Mars with the NASA InSight Spacecraft.


The monumental achievement has the world in awe, as the United States of America has planted a state-of-the-art NASA InSight spacecraft on Martian Soil.

InSight is a robotic lander designed to study the interior of the planet Mars.

The mission launched on May 5th of 2018, and at approximately 19:52:59 UTC on November 26th of 2018 after a journey of nearly 300 million miles (458 million km), the lander successfully landed on the surface of Mars at Elysium Planitia.

From Elysium Planitia, expected to be the landing zone of the first manned mission to Mars, it will deploy a seismometer and burrow a heat probe beneath the surface of the red planet. It will also perform a series of radio science experiments to complement the studies of the internal structure and rotation of Mars to send to NASA.

NASA says that only about 40 percent of the missions ever sent to Mars by any space agency has been successful, but notes that the U.S. is the only nation whose missions have survived. Those probes—like InSight, built by Lockheed—have provided some useful lessons. The spacecraft shares a real engineering heritage with the Mars Phoenix Lander, which landed a decade ago. But no landing is identical, and Insight has more mass and a very different landing angle than its Mars-proven ancestor.

What American ingenuity has accomplished in space is far more than our competitive nation-states, including that of China and Russia, who both boast advanced space research and technological advances of their own.

Whether or not life exists in the Milky Way or another galaxy far, far away remains to be seen. America is determined to locate and discover any advanced or primitive life forms that may exist regardless.

For now, we're in awe of what the great engineers and aeronautical scientists of our space program have accomplished.

Questions surrounding the mission can be submitted to the NASA website.

LIVE on NASA TV: Hear all about my #MarsLanding, from the team that made it happen. https://t.co/oig27aMjZd pic.twitter.com/uItcPoNwci

Tips? Info? Send me a message!
~Send Me An E-Mail!
—[email protected]
Follow The Entire Goldwater Team via Twitter!
@RedPillsYou
@PoliticallyRYT
@WhitePill
@steve_dellar
@MAGASyndicate
@kafkaguy
@TheGoldWaterUS
Follow Me On Gab!
@IWillRedPillYou
Be Sure To Share Our Articles, Freedom of Speech is Under Attack!
The Goldwater

Not one negro amongst the JPL crew, watched it to see for that reason only. The movie or tv series will infuse negros heavily into this story

Why "NASA" did not sent a man or animal to mars?﻿