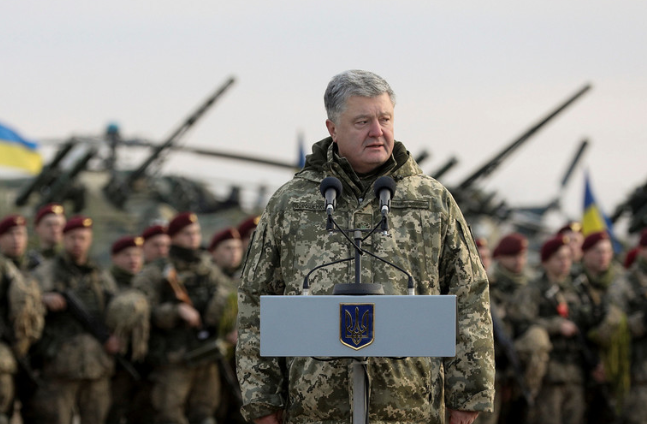 Ukrainian President Petro Poroshenko has asked NATO for support after Russian patrol ships took over the command on three Ukrainian ships in the Kerch Strait, a waterway between Crimea and southern Russia.

The United States and European countries in the UN Security Council condemned Russian provocation and rallied behind Ukraine.

Ukrainian president urges NATO to deploy naval ships to the Sea of Azov amid a standoff with Russia. https://t.co/TUiozMPCKJ


In an interview with Germany’s Bild newspaper, Ukraine’s President Petro Poroshenko said: “Don’t believe Putin’s lies,” reminding the German media how Russia had earlier also claimed innocence, saying it did not have soldiers in Crimea even as they moved to annex it.

“Crimea, Donbass, the whole country. As Russian Tsar, as he sees himself, his empire cannot function without Ukraine. He sees us as his colony.”

He pointed out that Germany is one of the most loyal allies to Ukraine: "We hope that NATO countries are willing to send navy ships to the Sea of Azov, to help Ukraine and ensure safety."

According to the Ukrainian President, the Russian leader Vladimir Putin plans to take control of the Sea of Azov shortly

"We cannot accept this aggressive policy from Russia. First, it was Crimea, then the east of Ukraine, now he wants the Sea of Azov. Germany must also ask itself the question: 'What will be Putin's next step if we do not stop him?' "

So much for the #KerchStrait being open to shipping ... Not a single #Ukraine 🇺🇦 vessel here.#Crimea #SeaofAzov #BlackSea #Russia pic.twitter.com/oTADUFiBfn


The Ukrainian President announced a state of emergency in the country following the conflict.

NATO had previously opted to choose Ukraine’s side, although the country is not an official Member State.

NATO boss Mr Jens Stoltenberg called on Russia to release the Ukrainian ships, which were shot at before they were taken over.

The crew must also be released, according to Mr Stoltenberg.

In total, 24 crew members are being held by Russia. Calls from the international community to release them have not yet had any effect.

Russia meanwhile blames the ever-escalating conflict in Ukraine on Poroshenko.

According to the Kremlin, the naval vessels of Ukraine had illegally entered Russian waters. Russian President Putin accused his Ukrainian counterpart Poroshenko of wanting to win voters for next year's presidential election with the 'provocation.'

US Secretary of State Mike Pompeo sided with NATO boss Stoltenberg and called Russia’s seizure of the Ukrainian vessels “a dangerous escalation and a violation of international law.”

“The United States condemns this aggressive Russian action. We call on Russia to return to Ukraine its vessels and detained crew members, and to respect Ukraine’s sovereignty and territorial integrity,” Pompeo declared.

Read what the Ukrainians say. They don't want to vote for Poroshenko and elections are coming up. This is Bill Clinton - Wag The Dog - all over again.

Hohol holodomor was a kike lie just like the holohoax.