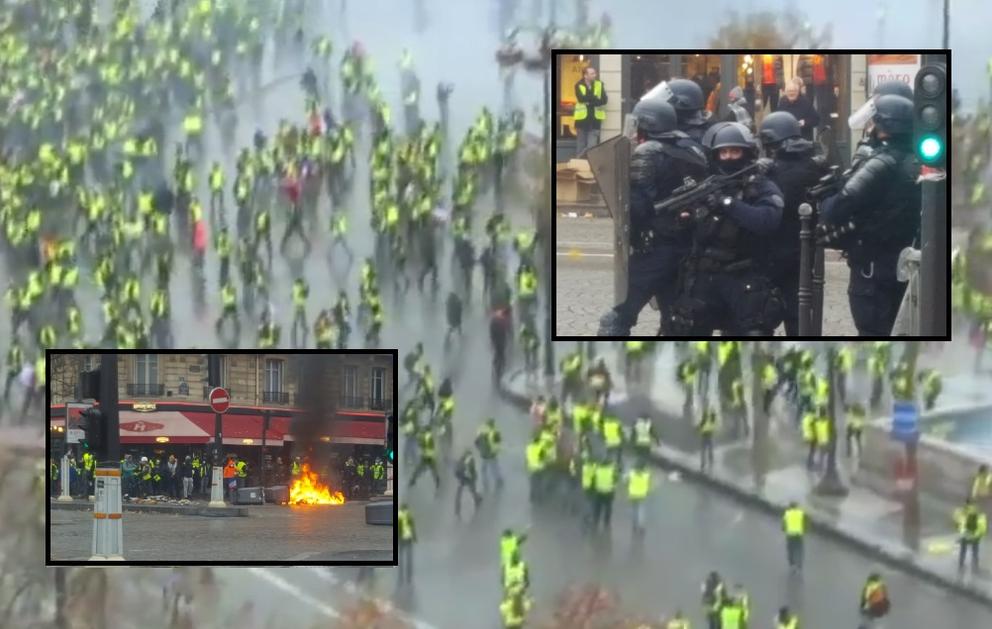 French President Emmanuel Macron is in Buenos Aires, Argentina for the moment together with the other G20 leaders. Although he has promised the French this week to be tough on both Saudi leader Mohammed Bin Salman and Russian President Putin, you can be sure that Mr Macron’s authority at the meeting will be damaged when he sees the images coming out of Paris once more.

It's the third weekend of mall demonstrations which began against rising fuel prices.

Follow the latest from France and the rest of the world here: https://t.co/ZG9yBQyrqG pic.twitter.com/DzARcJ08GV


Just as last Saturday, people are throwing rocks, rioting and fighting with police and already barricades are being built in various streets around the Champs Elysées avenue.


The official protest starts at 2 pm only, but around eight o'clock this morning hundreds of protesters were already present. Around nine o'clock, some demonstrators attempted to break through a checkpoint at the place de l'Étoile. The security forces responded with tear gas.

In the neighborhood of the Arc de Triomphe, rioters attacked police. They threw yellow paint bombs at the riot police and also attacked them physically.


After the demonstrators were chased away from the Arc de Triomphe, they spread to the adjacent avenues. Some of them are masked. On the avenue Mac-Mahon, trash cans were turned over and set on fire. In the middle of the road, there was a small garbage fire.


The Champs-Élysées has been closed off for all traffic since 6 o'clock this morning. Pedestrians are only admitted after an identity check. The police are present with about 5,000 men to keep the order.

Riot police use teargas against protesters in Paris https://t.co/9w340pk1ge pic.twitter.com/YcaAUIe1Br


The French government is waiting, hoping that the protests will die down.

President Emmanuel Macron earlier this week showed some understanding for the anger of the yellow vests (gilets jaunes) and their demand for lower fuel costs, but he hardly made any concessions.

“There is an atmosphere of civil war,” Mr Thierry Paul Valette, a spokesman for the movement, said “Macron has a big responsibility now. He can either calm the situation or inflame it.”

“The president might be in Argentina. But he is not in exile.”

The French are playing $5.74+ a Gallon Yet their cost per barrel of Crude Oil is the same as ours here in the USA? The Government wants add between 6.9% and 9.8% in Carbon Taxes to all fuels.

Try that again, the French government adds about 50% in taxes to the price of fuel, no kidding.