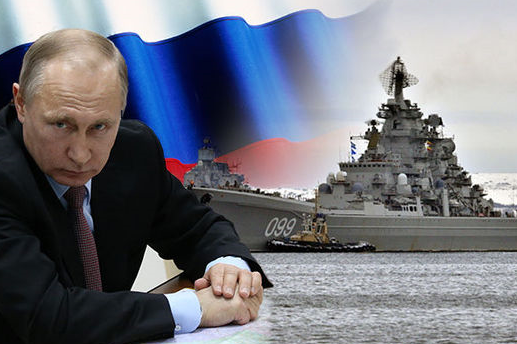 "Russia needs to understand that its actions will have consequences."

That was the tough message NATO chief Jens Stoltenberg sent out early last week, after the Russian navy attacked Ukrainian ships off the coast of Crimea. No follow-up action has since been taken.

NATO’s Foreign Ministers meet today and tomorrow to discuss what they see as "an increasingly assertive Russian foreign action."

The subject was already on the agenda before the recent armed action in Crimea, the Ukrainian peninsula annexed by Russia in 2014.

"That happened at the time, with insidious 'green men' who later turned out to be Russian elite troops. This time it was an open attack on naval ships, hopefully the world has now been awakened," claims Andreas Umland, researcher at the Institute for Euro-Atlantic Cooperation in the Ukrainian capital Kiev.


"Ever since the annexation of the Crimea, ships from NATO countries should have made 'friendship visits' to Marioepol, the most important Ukrainian port on the Sea of Azov, at least as a token of solidarity," says Edward Lucas, associated with the Center for European Policy. Analysis in London.

A NATO spokesman made it clear last week that such a fleet visit to the north of Crimea is not currently on the agenda however.


The Ukrainian president also called on one NATO member in particular: Turkey should ban Russian warships from the Bosporus and the Dardanelles. A futile request though, according to Mr Umland. "Suppose the Turks try to stop a ship and the Russians opens fire, then Article 5 of the NATO Convention comes into force: an attack on one is an attack on all."

Yet neither NATO nor the EU will be able to leave Russian aggression unpunished. Analyst Lucas: "The Ukrainian navy in the Sea of Azov are no match for the Russians, who are present with many more ships. Blocking the inland sea is part of a larger plan, with the aim of weakening the economy of Ukraine and to step up political tensions in the country, but with this latest attack, Moscow is mainly testing the West. "

The West meanwhile is, just as Putin likes it, divided.

The West is being humiliated

Mr Umland believes that NATO member states such as Romania and Poland should tighten their military ties with Ukraine.

In addition, he advocates a gradual reduction of the import of Russian oil and gas by European countries.

Allies have reinforced their message that they will continue to have a strong presence in the Black Sea, says #NATO chief @jensstoltenberg. "We will very closely monitor" the aftermath of #Russia's attack in the #AzovSea, he adds. No new military commitments to #Ukraine. pic.twitter.com/ArVUcqJRyW


Ukrainian Foreign Minister Pavlo Klimkin alluded to this already last week. According to Klimkin, who is a guest at the NATO headquarters in Brussels this week, 'international partners' are prepared to take new sanctions. Klimkin: "Russia is not an isolated country as it sells oil and gas, and tries to borrow money on foreign financial markets."

Whatever member states of NATO and the EU do, it will not be enough in the eyes of the Kiev government. Ukraine has been striving for membership of both organizations since the end of last century. According to the Ukrainians, the fact that Russia can do as it pleases means that it know the west is being humiliated through it’s inaction, and will therefore simply continue doing so.

Meanwhile, Russian authorities announced that they would award medals to the border guards who fired on and seized Ukrainian sailors and ships during last week’s confrontation in the Black Sea, to prevent what Moscow claims was an illegal incursion into its territorial waters.

WHAT A PIECE OF GLOBALIST PROPAGANDA GARBAGE. EYES ARE OPEN AND RECOGNIZE PROVACATION AND LIES WHEN THEY SEE IT. EVERYONE KNOWS THE DEEP STATE IN A AMERICA EXERCISED A BLOODY COUP IN UKRAINE IN 2014 AND IS NOW RUN BY GLOBALIST PUPPET MONEYMONGERS AND THE MONEYCHANGERS, WHO INVADE TO ROB RAPE AND PILLAGE RESOURCES AND ACCULULATE POWER IN PURSUIT OF ENSLAVING THE REST OF MANKIND FOR THEIR OWN DEMENTED AGENDAS. FRANCE STRUGGLES DAILY TO DEFEAT THE BLOODSUCKING TAX HOUNDS OF HELL. MAY GOD LIFT THEM UP IN VICTORY!!!!!!! AND THE REST OF THE WORLD AS WELL!!!!!!!

putin cucks to his jewish masters

YEAH... I SAW HOW PUTIN CUCKED IN SYRIA!