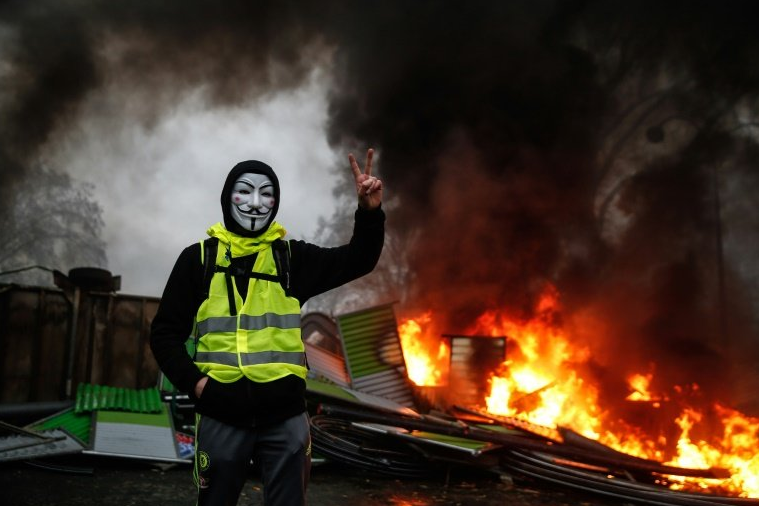 Premier Edouard Philippe announced yesterday afternoon measures that should have calmed the 'Gilets Jaunes' (yellow vests). The increase in excise duties on petrol, diesel and heating oil, the plan that gave rise to the discontent, is being postponed for six months.

A stricter and therefore probably more expensive vehicle inspection and the planned increase in electricity and gas prices have also been put on the back burner. In the meantime, the Prime Minister wants to table all parties involved to discuss future measures.

Hanging out in a roundabout in the north of France w some yellow vest protesters. Gilets Jaunes in the north. They had a fire and a Christmas tree! pic.twitter.com/bK5ksXm0e4


If they (meaning people to speak with) are not found, “we will assume they don’t want to negotiate” said the Prime Minister who added that "no tax may put the country at risk," hoping that the government’s move would be seen as an understanding of the anger of his compatriots.

It did however not take long before the first bad reactions started rolling in.

The ‘yellow vests’ said the measures were only 'cacahuètes' or 'peanuts'. Instead of postponing, the ‘complete abolition of the fuel tax’ would be a nice start, they claim. They furthermore demand an increase of the minimum wage and the reintroduction of a tax on large assets (a tax that has been abolished by Emmanuel Macron in order to please his rich friends, claim the yellow vests).

"The French do not want breadcrumbs, they want the whole baguette", said Benjamin Cauchy, one of the yellow vests spokespersons.

To our fellow Patriots in France🇫🇷...

Your brothers/sisters in America support you 100%. The tyranny that has plagued you has no place in this world. We fight alongside you, and will continue with our prayers...


Soon calls followed to return to Paris next Saturday. The 'gilets jaunes' who had stayed in the provinces during the last days of protests, now announced that they would come to the capital again.

The 'fanzone principle' that was applied last weekend will be abandoned: the fact that the Champs Élysées was closed and only accessible through fencing with identity and bag checks caused riots near the control points. Mr Castaner did not want to respond whether there would be even more police present this time.

The question remains as to why Macron waited so long to announce the measures. The situation has now gotten so out of hand that his plans make little impression on the yellow vests, who have cost the treasury 2 billion euros in damages already.

Critics claim that if he had previously taken the sting out of the popular revolt, he might have prevented the demonstrations from getting out of hand

After 'black Saturday,' which is how the riots of last weekend are perceived in the press, the number of French people that supports the movement hardly dropped, from 80 to 72 percent. Members of parliament are starting a mutiny within his own party. More and more deputies have said in interviews that Mr Macron should have postponed his ‘ecotax.’

Hey Macaroni... grow a set of balls and stand up with your people against the tyranny of the globalist cabal. You want to be loved and admired like Trump? Be a man of truth, justice morality, and your peeps will chant your name. You will be loved like never before and immortalized a hero. And President Trump will speak your name with respect and stand with you like a brother. You are going down in history as a puppet piece of shit!!! STAND UP AND BE A MAN OF INTEGRITY FOR GOD SAKE!!!! PATRIOTISM BEGINS AT HOME!!!

Proverbs 21:13 - Whoso stoppeth his ears at the cry of the poor, he also shall cry himself, but shall not be heard.

1 Timothy 5:8
“But if any provide not for his own, and specially for those of his own house, he hath denied the faith, and is worse than an infidel.”

Where are his treAsured Juifs now he needs them? Juden rats scurry from a sinking ship