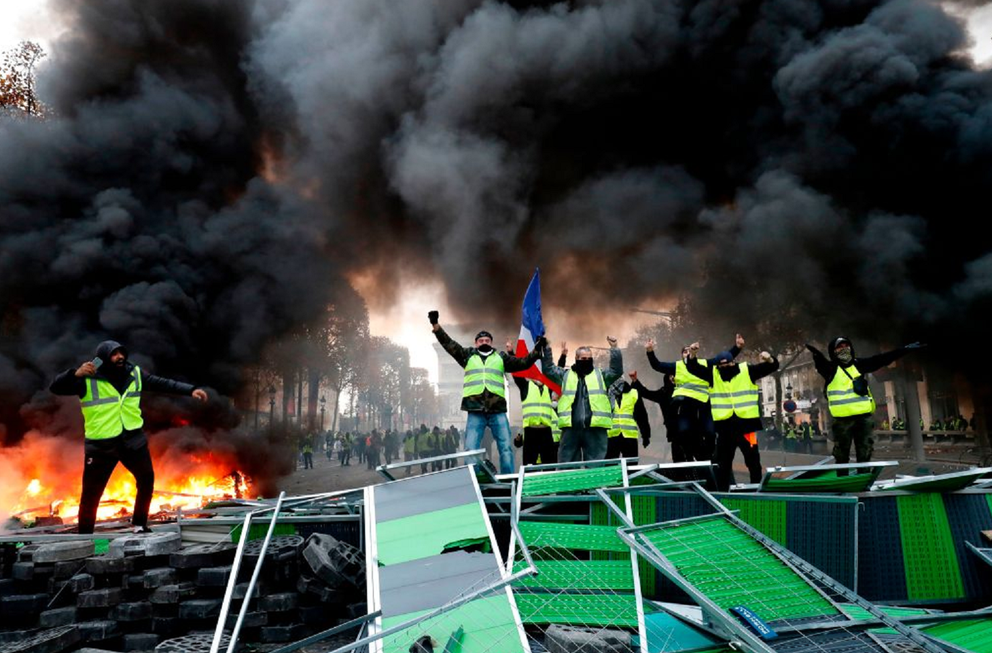 France - Can Macron Save His Presidency?

The protest of the yellow vests in France will reach a new culmination tomorrow when they protest in Paris again. At this moment, the uproar is so widespread that people are truly wondering whether President Macron can save his presidency at all.

The popular protest is in the first place a tax uproar. The immediate cause of the popular anger was the increase in fuel tax, which is now off course under pressure from the protest movement. But the dissatisfaction with taxes is deeper than that.

There is a widespread feeling of fiscal injustice in France. People see that their income has been stagnating for years, while the tax burden is being increased and many of the ‘gilets jaunes’ (yellow vests) that live in sparsely populated areas see public services there as post offices and police stations, which are financed with tax money, disappear because of Mr Macron’s decisions.

People in France stopped asking for an increase in pay a long time ago. By now, they demand a lowering of taxes first and foremost.

The dissatisfaction mainly focuses on taxes, taxes that are not income-dependent. Contrary to what many French think, the tax system is only progressively limited. There are a lot of taxes for which the rates are the same for every citizen, such as the VAT or the fuel tax.

Macron’s arrogance has brought us to this place. pic.twitter.com/43VhLPcfZ1


It is one of the sources of the success of the movement, that not wage increases but tax reduction occupies a central position in the demands of the yellow vests.

Anyone who asks for better terms and conditions of his employer usually combines with colleagues in a trade union. But taxes are common to everyone, including independent entrepreneurs and pensioners, groups which have attracted ‘yellow vest’ protesters in large numbers over the past few weeks.

Macron Has Turned His Own People Against Him

And how about the president himself? Is he partly responsible for the popular uprising which could cause his presidency to fall flat?

It is clear in any case that in the first year and a half of his term he has not managed to shake off the image of the so-called ‘président des riches’ (president of the rich class).

Partly due to Macron's tax policy, the image has emerged the he is a president who only distributes gifts to the rich. In particular, the abolition of the ‘ISF’ wealth tax (impôt sur la fortune) at the beginning of President Macron's mandate proves to be disastrous for his image formation with retroactive effect. Certainly the fact that his wife Brigitte afterwards invested in $50,000 plates for the palace and an expensive swimming pool did not help.

The abolition of this tax for the wealthy sent an not to be underestimated symbolic effect to the poor. Furthermore, Macron then continued to increase the taxes that mainly affect the poor people relatively hard, like a fuel and road tax.

In the midst of the yellow vest protests Macron was busy talking about renovating his palace https://t.co/mqlgEUGFR0


A lot is riding on how this weekend turns out and how Mr Macron deals with the consequences. if Paris is trashed again the opposition parties will be out for new elections or a new wealth tax. If Mr Macron gives in to that as well, he loses all credibility that during the rest of his presidency he will be able to reform anything else.

This guy deserves to go down big time...

France needs to get that idiot out ASAP and start massive deportations if they want to save their country.

THIS IS TOTALITARIANISM. THIS IS GLOBALISM. THIS IS WHAT THEY WANT TO DO WORLDWIDE. THIS IS WHAT A HILLARY CLINTON PRESIDENCY WOULD HAVE LOOKED LIKE. THIS IS WHAT AMERICA WILL LOOK LIKE IF AMERICANS FAIL TO UNDERSTAND WHO AND WHAT THEY ARE VOTING FOR. GOD BLESS DONALD TRUMP AND AMERICA FOREVER. AND MAY GOD GRANT EUROPE THE VICTORY OVER THE GLOBALIST SWINE!!!!