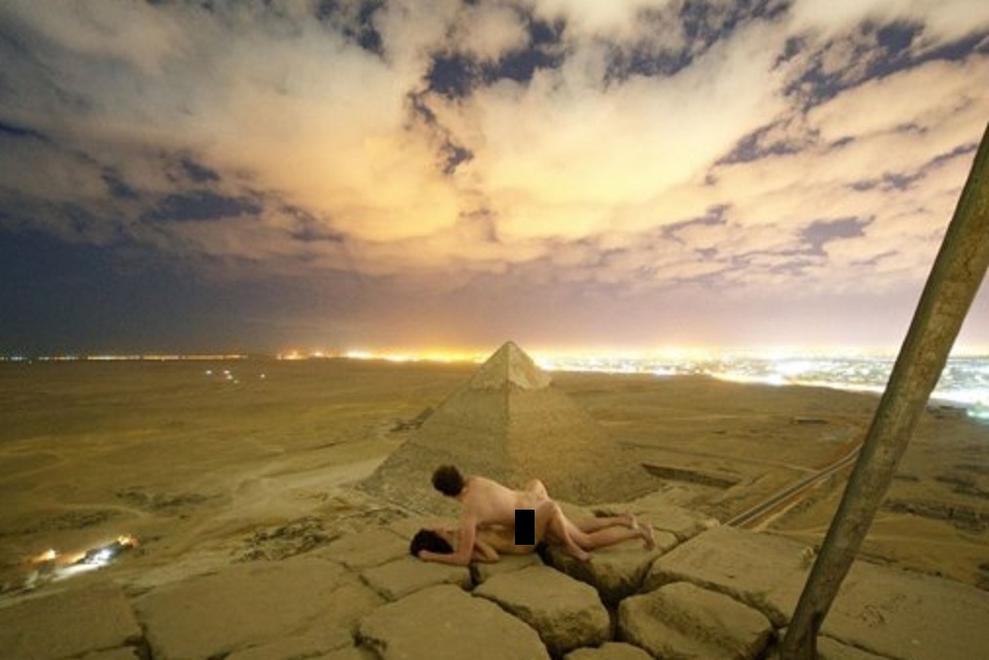 Egyptian authorities are angered and shocked over a video which has surfaced on social media showing a Danish photographer and his girlfriend first climbing the Great Pyramid of Giza, also known as the Pyramid of Khufu or the Pyramid of Cheops, and then proceeding to lie naked on top and simulate/perform a sexual act.

In Egypt, a judicial investigation has been started accusing a couple from Denmark who would have unlawfully climbed one of the pyramids of Giza to pose naked. It is not clear whether the two are still in Egypt.

Egyptians incensed by Danes’ nude shoot atop Great Pyramid: Photographer Andreas Hvid says he did not mean to anger locals, but had dreamed of the act for many years https://t.co/6FJg5pVuYA TimesofIsrael pic.twitter.com/VSOLorKZz1


The approximately three-minute video that was distributed on YouTube this week caused quite a stir in Egypt. There appears to be a couple on it which is climbing the pyramid of Cheops, which is forbidden. Once at the top, the woman starts to undress.


Right at the end of the video, a still image is shown on which the two appear naked on top of each other on top of the pyramid. The same image can be found on the website of the male half of the couple, Andreas Hvid, a Danish photographer who specializes in (nude) photography from high buildings.

The Egyptian minister of Antiquarian Affairs, Mr Khaled al-Anani has on Friday, according to state media Ahram Online, handed over a file with the images to the Attorney General.

Firstly, it will be examined whether the video and the much-discussed picture are real.

In the video description, Danish photographer Mr Hvid wrote “In late November 2018, a friend and I climbed the Great Pyramid of Giza. Fearing to be spotted by the many guards, I did not film the several hours of sneaking around at the Giza Plateau, which lead up to the climb.”

Climbing the pyramids is punishable by law in Egypt.

Moreover, critics say the couple showed a lack of respect for the conservative society of the country.

Miss Marisa Papen, a Belgian model, was put in an Egyptian cell for eight hours in April last year after she had posed naked at the temples of Karnak near Luxor.

I hope they’re out of Egypt.

I hope they get to enjoy Egyptian jail at the very least.

A stupid PR stunt that will eventually cost them their lives.

Likely some radical group is already wanting to make a name for itself is hunting them down.

Stupid
Disrespectful
Blatant disregard for the law and culture of another land in that land, in a purely self promotion for some fringe soft porn nonsense. As they have broken the law i hope they are extradited to face justice in eqypt. I suspect they will squeal like little children that they didnt knowbor dont deserve punishment but tgey did know, committed the offence and filmed it then placed it for the world to see which was a snub to the whole of egypt. They could have just sneaked down and kept the imagea for themselves but no.. Lets see how they stand up to eqyptian justice and jail.. They will have plenty of opportunity to get naked in there..

you just cant fix stupid , can you?