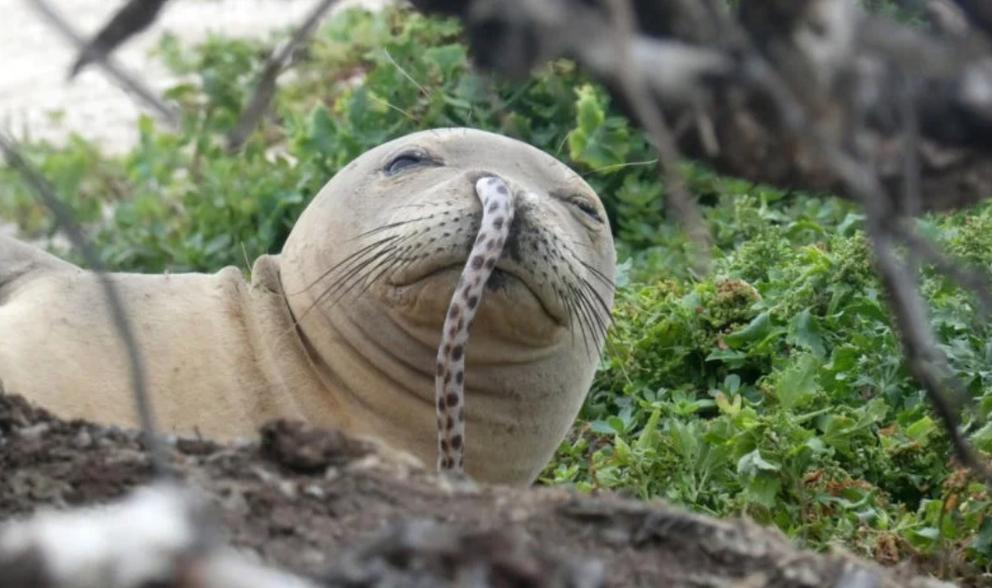 What do you do when an endangered species of seal keeps trying to snort eels? That is what scientists are trying to figure out since the endangered Hawaiian monk seals keep getting the snake-like creatures stuck up their noses. The bizarre trend has scientists fed up and throwing their hands up.

"We have no idea why this is suddenly happening."

One look at these majestic juvenile Hawaiian monk seals as it lounges near a sandy white beach explains why scientists want to keep them alive. They really are a magnificent animal, but why are they getting other animals literally stuck in their noses all of a sudden? It is as if the seals were bored and decided as a game they would mess with the eels, then the eels got together and had said we've had enough of this and all decided to swim up seals noses as a prank.

Maybe that theory is outrageous, but so is the problem that scientists like Claire Simeone are dealing with. "It's just so shocking," she said. The calm demeanor of this one seal in front of Simeone now looks perfectly relaxed, the only thing wrong with the picture is the slender body of an eel hanging from the seal's nostril. "It’s an animal that has another animal stuck up its nose," Simeone added.

National Oceanic and Atmospheric Administration’s Hawaiian Monk Seal Research Program shared the image on Facebook and it stunned people. It was taken in the remote northwestern Hawaiian islands and went viral due to the bizarre nature of the whole scene. Scientists have thrown up their hands and all they can say is they hope seals "make better choices".

The phenomenon was first documented about two years ago when a man named Charles Littnan, who worked as a lead scientist of the monk seal program, got a strange email. The email was from a researcher in the field and the subject of the email read, "Eel in nose." Littnan told The Post, "It was just like, 'We found a seal with an eel stuck in its nose, do we have a protocol?'"

Littnan advised the process of removing the eel after several emails and phone calls with Littnan. "There was only maybe two inches of the eel actually still sticking out of the nose, so it was very much akin to the magician’s trick when they’re pulling out the handkerchiefs and they keep coming and coming and coming," Littnan said.

It took about a minute to pull the creature out of the seal's nostril.

"We have no idea why this is suddenly happening," Littnan added. "You see some very strange things if you watch nature long enough and this could end up being one of these little oddities and mysteries of our careers that 40 years from now, we’ll be retired and still questioning quite how this happened."

It's just a theory but.....
Perhaps...
They are seeing to many Millennial Snowflaked eating Tide Pods and snorting Condoms?...