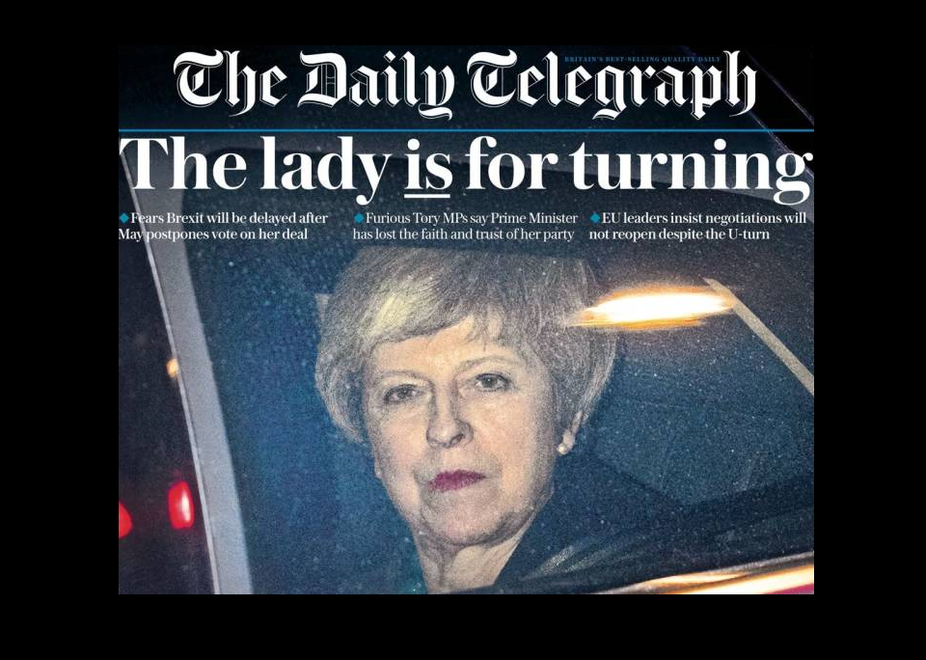 Brexit - May ‘Stuck Between A Rock And A Hard Place’

Mick Jagger’s Rolling Stones once explained how the situation where one has to choose between two possibilities, neither of which is truly acceptable, is known as being ‘stuck between a rock and a hard place.’

Her fellow Briton with that song lyric from the ‘Steel Wheels’ album explains the situation UK Prime Minister Theresa May has maneuvered herself in.

The British PM delayed the crucial vote on the Brexit agreement. She confirmed this in the House of Commons yesterday afternoon. According to Ms May there is a "widespread and deep concern" about the "Irish issue" (the impact of Brexit on the border between Ireland and Northern Ireland). A new date for the vote is not yet known but time is tight as the UK is set to leave the EU by 29 March 2019 at the latest.

According to the Tory leader, her agreement with the European Union receives broad support, but mainly the Irish backstop arrangement (the emergency brake that has to keep the Irish border open) is still deeply divisive. She now agrees what many in the British press have said for days: if the deal were brought to a vote, she would lose by a substantial majority.

‘The will of the people is being betrayed.’

In a heated debate, former UKIP leader @Nigel_Farage says the #Brexit vote is not being abided by. pic.twitter.com/UGsvpBWMBd

Ms May is convinced that she can still find a majority to vote in favor of her Brexit agreement, if she can obtain additional guarantees for the backstop from the EU. She therefore now wants to meet the EU at a summit later this week. Ms May explained that: "I have talked to a number of European leaders this weekend and for the European summit I will have contacts with my counterparts from other Member States and with the leaders of the Council and the committee. I will send them the clear concerns of the parliament. "

The British PM will travel to both The Hague (Holland) and Berlin (Germany) today to discuss the Brexit deal with Dutch Prime Minister Mark Rutte and German Chancellor Angela Merkel. The meeting with Rutte is scheduled at 9 am and with Merkel at 1 pm. According to May, telephone contacts show that there is a willingness to talk.

Mr Guy Verhofstadt, the Brexit coordinator for the European Parliament, already announced on Twitter that the EU will side with the Irish on this issue, stating: “I can’t follow anymore. After two years of negotiations, the Tory government wants to delay the vote. Just keep in mind that we will never let the Irish down. This delay will further aggravate the uncertainty for people & businesses. It’s time they make up their mind!”

"We will not renegotiate the deal, including the backstop, but we are ready to discuss how to facilitate UK ratification" - President of the European Council, Donald Tusk responds to delayed #BrexitVotehttps://t.co/p1kQ9xdSui

In essence, and certainly armed with the knowledge that the European Court of Justice clearly stated that at this point the UK can unilaterally ask to stop Article 50 and thus remain in the EU if it wants to avoid a ‘hard Brexit,’ analysts agree that there is no reason for the EU to give anything more to the Conservative government of Ms May.

Meanwhile newspapers commentators in the UK, both on the leave as well as on the remain side, are convinced that at this point the UK Prime Minister is simply playing for time, aka she’s running out the clock until there are only two options left on the table: accept her deal or no deal at all.

UK Prime Minister Theresa May is our equivalent to retard Obama and the hell he brought to the United States.