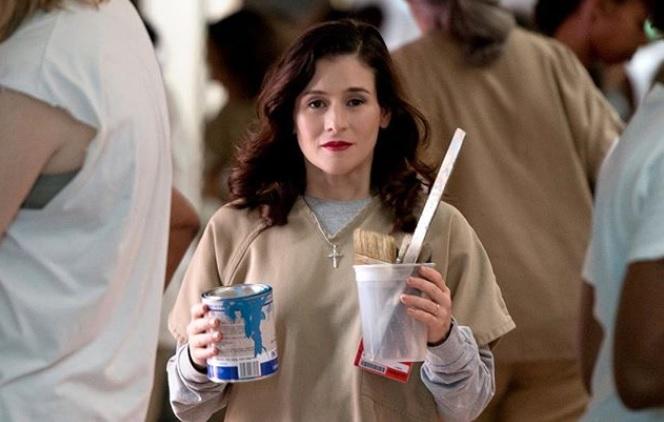 An Anti-Trump actress from the hit Netflix series "Orange is the New Black" has accused veteran actor Geoffrey Rush of "acting inappropriately" in the trend of far-left actresses accusing white men of sexual harassment. Yael Stone kept silent for nearly a decade regarding an alleged incident with Rush during a 2010 play "Diary Of A Madman" which was performed in both Sydney, Australia, and New York.

It's amazing how many women are coming forward against white men since Trump was elected, not for rape, not for assault, but for petty incidents such as flashing or even just making a sexual advance. It is to the point now where men can no longer put their careers' at risk by being in a room alone with one of these far-left, anti-Trump women of Hollywood. The effect of the #MeToo movement started in Hollywood but has now permeated every industry in the country.

These people realize human's natural and original form is not something traumatic. I mean everyone grew up hearing the story of Adam and Eve, will the SJW's go after the Bible next since Adam "exposed himself" to Eve? It's not my place to judge the merit of Stone's claims or whether they were damaging to her, but I can certainly recognize a trend of far-left, anti-Trump Hollywood elitists campaigning against white men by bringing up even the slightest thing from the past that could be considered offensive.

Geoffrey Rush In "Pirates Of The Caribbean" - @Gibboanxious | Twitter

Stone claims she was "terrified" to talk about Rush because of Australia's defamation laws, but now that the culture has turned on white men she must feel comfortable talking about it now, is that it? "In the United States, the legal burden is on the person who claims to have been defamed: He or she must prove that the allegations are false," the New York Times reported. "In Australia, in the area of libel law, it’s the opposite."

Rush responded to the allegations saying they are "are incorrect and in some instances have been taken completely out of context." He added, "Clearly Yael has been upset on occasion by the spirited enthusiasm I generally bring to my work. I sincerely and deeply regret if I have caused her any distress. This, most certainly, has never been my intention." There, that should be the end of it. She got an apology out of Rush and he said he never intended to cause her any distress. Something tells me that won't be the end of it.

Soon, Hollywood companies and executives will stop working with Rush citing his so-called "inappropriate behavior". Stone will be hailed a hero by the far-left #MeToo movement for taking down another white man who they consider to be part of the patriarchy. Was there a crime committed? If there was why didn't Stone report it to the police or tell anyone at the production company about how "terrified" she was?

She said in an interview with Leigh Sales on ABC's 7.30 that Rush made her "uncomfortable". In another interview, her description of the incident goes from making her "uncomfortable" to "You can see in all of my communications... that there's an element of terror." Be warned white men, you can't joke about anything sexual, be around any of these anti-Trump crazies alone, or even try to make any kind of advance. Soon, the women of the #MeToo movement will find that men are too afraid to date them and it will be a lonely world for them. I'm sure they will find some way to blame the fact that men are too afraid to get with them on the men themselves.

Orange? Trump is gold. They have ever learned the difference. They think gold is orange. Sickos. Gold is the new White.

sorry oranges are not allowed over the borders,check with customs before travel and those with animals ~well they are already ADVANCED and aware.~ but the epidemics that are going on NOW ! they will have a big alert . even more so if they have never researched another country for travel... oh DOES THE MAIN STREAM MEDIA um???? update that ?????? for customs at borders DO with the HEALTH AUTHORITY in EVERY COUNTRY!!!!!!!!!!!!!!!!!!!!!!!!!!!!!!!!!!!!!!!!!!!!!!!!!!!!!!!!!! that does apply to $$$$$$$$$$$$$of bucks people try ad play games in ANY COUNTRY this global thing being shoved on any country is a sick game MORE THAN MANY have ever considered...and that is not just about humans. or pity.. PLANTS ANIMALS already have THEIR !! life effects + preferences and can do amazing games in areas that they living forms do not adapt to.. nature is EARTH in the wild... beyond the baby powder and stock market that recent news site cover the JOHNSON AND JOHNSON b a b y powder laced with asbestos.... and orgranic .. righT!~ that is a toy word....."" * """

THE WALKING TALKING petri dishes . cell cultures . but oooh yeah people forget or have not learned ~