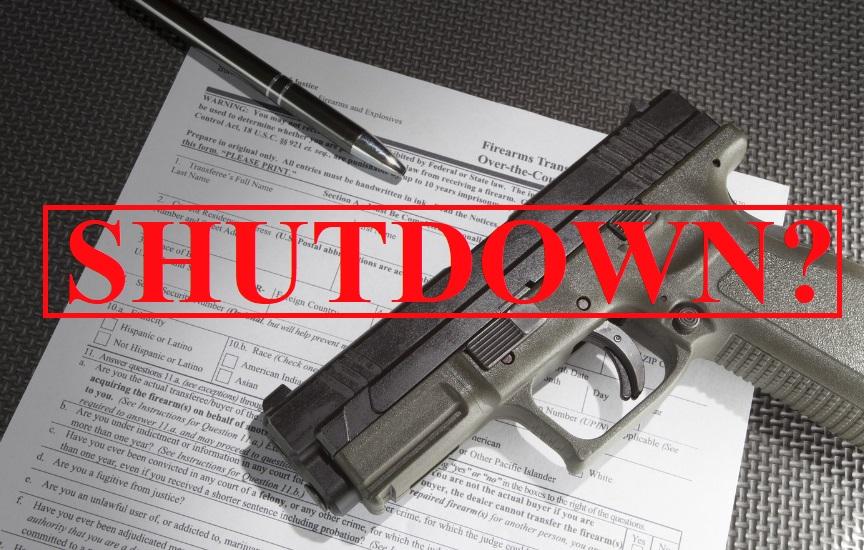 Can You Still Buy A Firearm During A Government Shutdown?

It feels like the last several years have held so many federal government shutdowns that the population of America has almost become accustomed to them. But what if you are looking to purchase a firearm that requires a federal background check? Would the government shut down prevent you from doing so?

To get to the bottom of this question, let's first take a look at which federal agencies are affected by a government shut down.

What Federal Agencies Are Affected By A Government Shutdown?

There are at least another dozen government agencies which were affected by the 2013 shutdown, but the ones most important to answering our question are listed above.

Which Federal Government Agencies Is Responsible For Background Checks?

According to Wikipedia, "The National Instant Criminal Background Check System (NICS) is a United States system for determining if prospective firearms or explosives buyers' name and birth year match those of a person who is not eligible to buy." It goes on to say that the background back was mandated by the Brady Handgun Violence Prevention Act, or the "Brady Law," of 1993.

After a person completes the appropriate form, the gun store must hold a Federal Firearms License (FFL) and is responsible for initiating the background check which can be accomplished either by phone or by computer. It is worth noting that it is not required under federal law for intrastate firearm transfers between private parties to conduct background checks, although some states do require them even between private parties.

According to the Bureau of Alcohol, Tobacco, Firearms, and Explosives (ATF) website, NICS checks are conducted by the Federal Bureau of Investigation (FBI). Since the FBI is a branch of the Department of Justice, I referred back to the list of affected government agencies from the 2013 government shutdown. Referring back to the Department of Justice section, I found that 85% of Justice Department employees will stay on the job. Now that we know the FBI is responsible for processing background checks when a citizen applies for a firearms license, and the Justice Department is affected by the shutdown, will the FBI be affected by the government shutdown?

How Does The Government Shutdown Affect The FBI?

The FBI website offers this information about the NICS:

"NICS is located at the FBI’s Criminal Justice Information Services Division in Clarksburg, West Virginia. It provides full service to FFLs in 30 states, five U.S. territories, and the District of Columbia. Upon completion of the required Bureau of Alcohol, Tobacco, Firearms, and Explosives (ATF) Form 4473, FFLs contact the NICS Section via a toll-free telephone number or electronically on the Internet through the NICS E-Check System to request a background check with the descriptive information provided on the ATF Form 4473. NICS is customarily available 17 hours a day, seven days a week, including holidays (except for Christmas). Please be advised that calls may be monitored and recorded for any authorized purpose."

According to the Washington Post, agents with the FBI, DEA, and ATF will keep working through the government shutdown, including the Coast Guard, Border Patrol, and ICE. So, does this answer our initial question about whether the shutdown would prevent someone from purchasing a firearm?

Since the FBI is responsible for processing federal background checks using the National Instant Criminal Background Check System (NICS) and the FBI will continue operating as usual during the shutdown it follows that one would still be able to purchase a firearm and complete any necessary federal background checks. So in short, the answer is yes, you can still buy a firearm during a government shutdown.

There is one caveat that I discovered on the FBI website while researching this question. The NICS is not available during Christmas Day. "NICS is customarily available 17 hours a day, seven days a week, including holidays (except for Christmas)," according to the FBI website. However, this shouldn't be much of an issue considering you'd be hard pressed to find a gun store that is open on Christmas Day anyway.

Related coverage: The History Of The Bump Stock: From Creation To Elimination

Earlier this year, a government shutdown took place in January during which the website Personal Defense World reported that the FBI's background check system (NICS) would remain open during the shutdown and continue operating as usual. The DOJ also issued a statement during the January shutdown which said essential personnel would not be affected which includes essential personnel:

It would be difficult to imagine that the NICS system would be shut down during this most recent government shutdown since the system is so vital not just for background checks but for fingerprint identification services, national security investigations, and records management. So I think it is safe to say that yes, it is still possible to purchase a firearm, (assuming you pass the federal background check conducted through the NICS). The only day that you would not be able to have a background check application processed is on Christmas Day.

1st of all it is NOT the OVER HYPED by Media Total Government Shutdown.

It is operations reduced to only ESSENTIAL personnel.

Then private sells can still be done using Gun Trader, other sites and Gun Shows. ALL LEGAL.

What I would like to see is a Anonymous Official Public Accessible Data Base that allows private purchasers to see if the firearm being purchased is listed as stolen or not.

I agree with the previous comment with one exception, firearms purchased online usually have to go through a ffl as it is illegal to ship a firearm to a non ffl. There is one exception to this rule, as a ffl I can ship a customers firearm back to them after repair. So the only way online purchases would be legal without a nics check would be if the buyer and seller met face to face.

This WILL affect people buying NFA items and will easily add 2-5 more months of waiting time to obtain the tax stamps for suppressors, machine guns, sub-machine guns, short barreled rifles, short barreled shotguns, and other NFA firearms and NFA "destructive devices". I also wonder "What happens if there is a delay for "further investigation". Will the FBI just not investigate and allow the 3 business days to elapse, and then by default the gun transfer is okay to proceed? I have seen numerous people get delayed or "held up" in the form 4473 processing. I usually get cleared within 24 hours or less, but only because I forgot to submit my permit. When I submit my permit the FBI can quick reference the fact I took classes, submitted fingerprints, was already investigated and they already have all of that on file, so there is no reason to do any further checking. IF I were arrested for a felony, or a disqualifying misdemeanor the permit would show up as having been revoked.

Jeez I just wanted an answer and had to sift through all that crap.