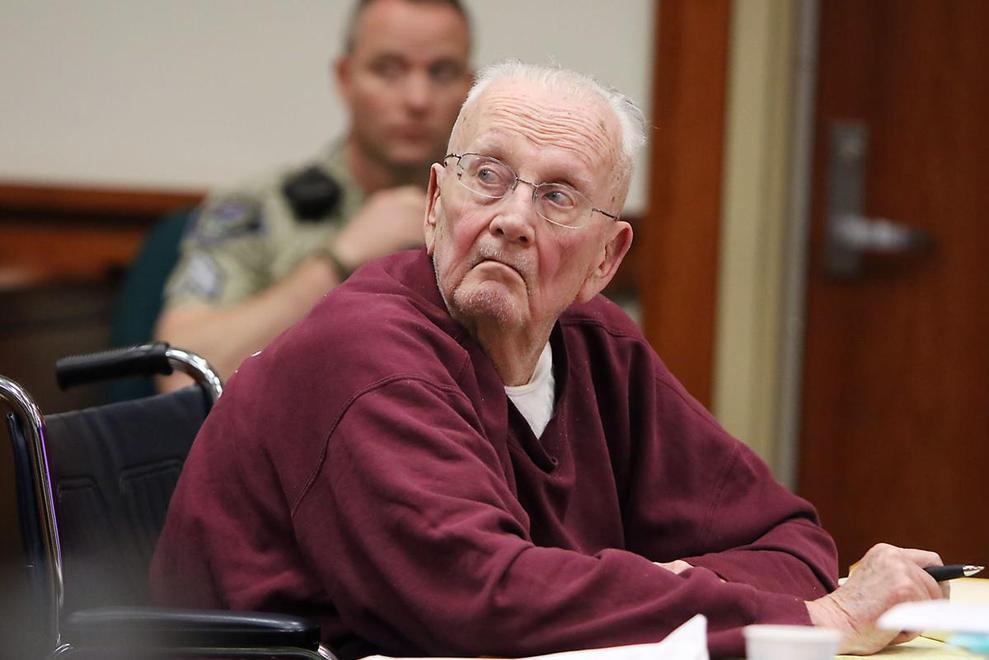 The disturbing case surrounds a 73-year-old Catholic Priest, Rev. W. Thomas Faucher. He was convicted on child pornography charges, and shocked the court m with a confession during his sentencing hearing saying that he enjoyed urinating in the “Sacramental Wine” at St. Mary's Catholic Church, in Boise, Idaho.

In early 2018, The Goldwater reported on the arrest of Faucher, who was caught with child pornography, LSD, ecstasy, and marijuana inside his home.

Patheos reported that Father Thomas Faucher held a desire “to rape and kill children,” and even fantasized about it.

” The Rev. W. Thomas Faucher (FOH-shay), 73, pleaded guilty to five felonies earlier this year. During his sentencing hearing in Idaho’s 4th District Court on Thursday, Judge Jason Scott said Faucher fantasized about raping and killing young children, favored child pornography that depicted extreme violence and claimed in online chats to have mixed his own bodily fluids into the communion wine at his church.”


At the time of his arrest, Faucher was charged with 10 counts of child sexual exploitation, two counts of distributing sexually exploitative material involving children and two counts of drug possession. In all, 25 charges were brought against the retired Catholic Priest.

In September, the trial of Thomas Faucher concluded with the pedophile Priest entering a plea of guilty for five felony counts, only to be sentenced this week.

Prosecutors said that Faucher was investigated after law enforcement received a tip from the National Center for Missing and Exploited Children that the former Priest had been engaged in the downloading of child pornography.

This led to a search warrant for Faucher's home, which would be carried out by the Idaho Attorney General's Office in February of 2018.

Inside the home authorities uncovered thousands of images and videos of child pornographic materials. Numerous hard drives, computers, mobile devices, as well as SD cards were seized by investigators, according to The National Catholic Reporter.

“When I first heard of these allegations, I was absolutely stunned," Boise Bishop Peter Christensen said, adding that "there are no excuses" for the disgusting actions Faucher was charged with.

"If these allegations are true and proven in court, they are a betrayal of the trust we place in all ministers such as Father Faucher. Anyone who takes advantage of and exploits children for their own gratification is absolutely wrong. There are no excuses for such behavior by any one of our clergy," Christensen said.

Authorities would also find a stash of marijuana, ecstasy, and the psychedelic drug known as LSD.

Faucher was initially ordained by the Boise Diocese in 1971, and later served as a Pastor for St. Mary's Parish on 2612 West State Street in Boise.

The allegations against Faucher sent shockwaves across the community in Boise, but the conviction and the sentencing hearing this week would turn an already disturbing headline into a disgustingly perverse tale of another Luciferian infiltrating the Catholic Church.

“I was one really sick puppy,” Faucher said at his sentencing hearing at the Ada County Courthouse in Boise, Idaho, as reported by the Idaho Statesmen. “I screwed up big time. I feel so much remorse and anger.”

4th District Court Judge Jason Scott listened as the pedophile Priest confessed to his crimes, and the courtroom was left in shock by the confession to urinating in the wine given out during Communion.

This disgusting Priest actually engaged in urinating in the Communion wine, known as the “Sacramental Wine,” according to his testimony, and was never charged for those horrendous crimes.

We're unsure how many Parishioners may have drunk the Communion wine over the years, or if any diseases or bacteria were transmitted when the urine was ingested.

These people are sick.

Thomas Faucher pleads guilty to two counts of distribution of sexually exploitative materials, two counts of possession of sexually exploitative materials, and one count of drug possession. Local officials say that Faucher “got off easy,” with victims of crime advocacy groups saying that he was being protected by the Catholic Church, and it's huge if not overreaching influence.

The Catholic Church continues to encircle itself with scandals, racking up billions of dollars in payments to victims of pedophile Priests who preyed in children across the globe.

Last year, the Catholic Church made headlines when it refused to pay 700 child victims of predator Priests, with the Vatican claiming those children “consented” to their own sexual abuse.

In yet another display of diabolical behavior from the Catholic Church, Rev. W. Thomas Faucher spoke to the court, where he attempted to justify his actions and apologize.


“I am deeply sorry that I was and have been connected to that in any way,” Faucher said in a 17-minute testimony. He claims that he was “deeply struck by the victim impact statements,” and that he “knows child pornography is not a victimless crime.”

Despite having thousands of images and videos of child pornographic materials on his devices, and being caught with narcotics such as ecstasy and LSD, Faucher thought he could weasel his way out of imprisonment.

Keep in mind that he'd testified to urinating in the St. Mary's Catholic Church’s “Sacrificial Wine,” but seemingly feels as if he's above the law.

Prosecutors sought a thirty-year sentence for Faucher, saying that he posed a threat to society if he were ever released, asking that the court impose at least 20 years before he's eligible for Parole.

4th District Court Judge Jason Scott was not amused by the crimes of Faucher, or his proclamations of remorse, sentencing the perverse Faucher to 25 years in prison, where he will likely die behind bars.

Faucher is currently in a wheelchair, and due to a debilitating blood disease, will require treatment during his prison sentence.

As a response to the sentencing and verdict, the Boise Diocese is now pushing to see Thomas Faucher defrocked, according to the Idaho Statesmen.

In the canon law of the Catholic Church, the loss of the clerical state commonly referred to as ”laicization,” is the removal of a bishop, priest or deacon from the status of being a member of the clergy.

The term loss of clerical state used by the Catholic Church corresponds closely in meaning to the terms ”defrocking,” and ”unfrocking,” which is used in other traditions. "Defrocking" has no meaning in Catholic canon law.

Diocese spokesman Gene Fadness gave an interview about Faucher’s conviction, where he also expressed shock to the crimes the Priest committed against young children.

“It’s been agonizing every day for the parishioners at Saint Mary’s and for those in the community, even outside Saint Mary’s,” Fadness said. “He was not just a priest, but a prominent priest, well known. This has been very difficult for everyone involved. I think tomorrow will hopefully put a sense of closure to it, as far as the criminal prosecution.”

“We were disappointed in his response and his defense,” Fadness said. “He made it sound like it was a rare thing, and it only happened once or twice, and he was under the influence. The blame was on everything and everywhere but him, it seemed. That was disappointing.”

Roman Catholic Officials from the Vatican were present during the sentencing hearing, although they claim they didn't pay for the services of Faucher’s attorney, Mark Manweiler.

Manweiler says he will petition the court to release Faucher on supervised home incarceration, albeit the likelihood of a change in sentencing seems slim.

For now, Faucher will continue to serve out his sentence in Idaho, before eventually being transferred to a yet to be determined federal prison.

---“When I first heard of these allegations, I was absolutely stunned,"---