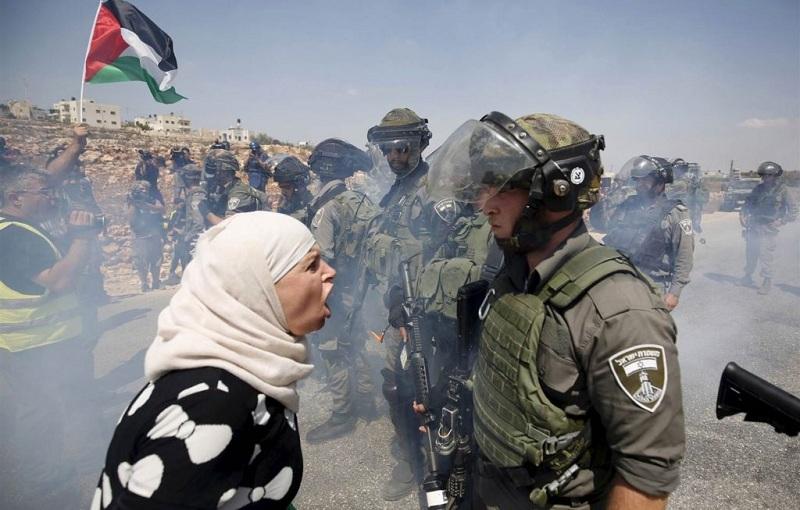 The often-unpublished truth about the Israeli Occupation of Palestine is that most of the world has been indoctrinated into supporting the wrong side, but as the internet continues to document and expose the truth, we're seeing the oppression first-hand.

There is an unwritten rule that criticism of Israel is apparently off-limits to the mainstream media, and regardless of the left or right side of the spectrum, both seemingly support the occupation of Palestine.

"Over 700 West Bank children were detained by Israeli military forces between 2012 and 2017, with 72 percent of them enduring physical violence after the arrest, according to Defense for Children International Palestine (DCIP)," reports Toward Freedom.

More footage of the brutal Israeli Occupation Army engaging in economic terrorism against innocent Palestinian farmers and their families has surfaced, as Israel cranks up its propagandist efforts after President Trump decided to pull US Forces out of the Middle East.

❝Oh Father, My Olive, My Olives❞
A #Palestinian farmer whose #olive trees being cut down by #Israel's occupation army so to deprive him of his source of income & force him to leave his land to immigrant #Jewish colonial settlers pic.twitter.com/fiPpX41RxZ


It happens every day, every hour of the dayhttps://t.co/4h4sVQgyF2


The land of Palestine self supports the lives of many by harvesting the cash crop of olives, which is why Israel targets the olive trees. The Israelis have tried to force Palestinians out of their homes with an exodus brought on by the stranglehold over Palestinian farmers.

The goal is the Israeli occupation forces is to see an exodus of Palestinians from the land they've stolen from them, and in many cases, the farmers and their families have no choice but to flee to where they can again grow their crops.

Israel, a fictitious nation which stole the land of Palestine in a corrupt and totalitarian fashion, and bribed the world community into believing its tyrannical lies, is the leading sponsor of terror in the Middle East.

Americans are misled through the entertainment industries of Hollywood into believing that Islam is responsible for the Middle East’s problems. As we know, Hollywood is predominantly owned and controlled by those loyal to Israel.

In the land of occupied Palestine, Israeli terrorists continue to engage in the barbaric land grabs, over a fictitious and manufactured claim that Israel belongs to the Jewish people.

Most Americans have no idea that Israel is committing atrocities against the Palestinians, but the footage continuing to come out of the region shows the calculated and violent nature of those who call themselves Jews, with little to no footage of Palestinians as the antagonist.

As American begins to awaken to the “fake news” mainstream media, with their manufactured headlines or outright lies which including the crimes of libel and slander, they are slowly seeing the truth.

CRYING THEIR HEARTS OUT➤ Young #Palestinian School Girls Under Arrest#Israeli occupation forces arrested a number of young #Palestinian school girls & kidnapped them into an unknown destination after raided the #Palestinian town of Bitunia, west of #Ramallah, today pic.twitter.com/9k6KJHr17D


The truth is that Palestinians are simply trying to survive, when Israel, at the expense of the US taxpayers, continues to oppress the innocent.

Palestinians, who have had their country and livelihood ripped from them, aren't even allowed to have running water without Israel's permission.

Israel has used the 1993 “Oslo Agreement” as propaganda and a means of tyranny, depriving Palestinians of basic human rights. They're able to shut off, or outright disable the flow of water to the Palestinian people at any given time.

This agreement, alongside the controversial and hidden history known as the “Balfour Declaration” effectively promised to steal the land of Palestine for the benefit of Jewish people since at least 1917. Yes, the outcome of World War 2, which led to the United Nations’ creating the “nation-state of Israel,” was written and planned long before the war ever started.

The Balfour Declaration was an open letter from British Foreign Secretary Arthur James Balfour to Lord Walter Rothschild. The letter was published on November 2nd, of 1917, a year before the end of World War I. Some claim that Lord Rothschild himself penned the letter, albeit officially its proclaimed as being signed by Balfour.

At the time of the declaration, Palestine was ruled as a British colony. The British people would later be told that Palestine was given to the Jewish people in honor of the creator of acetone, Chaim Weizman, a notorious Zionist.

The declaration wouldn't achieve anything until the later Treaty of Sèvres and the dissolving of the Mandate for Palestine. In short, a handful of the world's most powerful bankers and the politicians of world powers in their pockets conspired to rip the Palestinians away from their homes and plant Jewish roots into the land, calling it “Israel.”

For decades, the world had no idea about the atrocities of Israel. Every Christian Zionist preacher and church in America would spew blasphemous lies about Israel, calling them “The Chosen People,” swearing loyalty to the nation.

Combined with Bible revisionists such as that of the Scofield Reference Bible has continued this cycle of endless financial support of Israel at the behest of Americans. What Christian would doubt their pastors? Not many.

The truth is that the Bible has been rewritten to include Scofield reference notes, falsely claiming God's humans should support the nation of Israel.

If your church reads from a Bible that includes Scofield annotations, you're being deceived. The solid word of God remains in the King James Bible, prior to major changes being implemented on behalf of those with an agenda.

Thanks to the internet, these truths are coming to light.

The world is beginning to pay attention to the crimes of Israel, and the atrocities against Palestinians.

After nearly 18 years of war in the Middle East, Americans are tired of fighting the battles of “our greatest ally” in Israel, further inciting an “America First” agenda.

Palestinian Christians have also begun to speak out.

They have a message for President Trump about the crimes of Israelis and want him to hear their side of the story.

President Trump agreed to send the US Embassy to Israel into Jerusalem, which is the capital city of Palestine. This has created more enemies for America among Muslims.

Recently, it seems as if President Trump has had some form of awakening to the grand scheme after he agreed to pull US forces out of Syria.

Others argue that President Trump has known the truth the entire time, citing the fact that he ended the CIA program of arming moderate rebels in Syria last year.

It's illegal to boycott Israel in 26 US States.


After Hurricane Harvey, residents and businesses surrounding the community of Dickinson, Texas were required to sign an agreement to not boycott Israel in order to apply for Hurricane relief.


This sparked outrage, even from Jewish Media outlet Haaretz, and the plans were later scrapped.

At least this will put an end to the "Jews-control-the-media" slander. https://t.co/smjXTPKWIy


More recently, Marc Lamont Hill was fired from CNN after announcing his support for Palestine, which in-turn awakened millions to the power and influence of the Israeli lobby.

Marc Lamont Hill was featured on hip-hop radio show The Breakfast Club discussing Israel's occupation of Palestine, the importance of speaking up against injustice, and being fired from CNN. pic.twitter.com/PMFAV8vgXJ


President Trump has suggested that Jared Kushner incite a Middle East “Peace” deal, but Palestinians have implied that there can be no deal until Israel stops building settlements on their land.

Whether or not the influence of Jared Kushner and Ivanka Trump will continue to determine White House policy is yet to be seen. We do, however, know that the announcement of an alleged peace deal is not far from seeing the light of day.

8 facts about #Palestinian #children under #Israeli #occupation,
"#Israel" is the most criminal state in dealing with children, according to several human rights organizations & #humanrights organizations, which are quoted in this video pic.twitter.com/0ERESoUt8H
via @Zionocracy


With US forces pulling out of Syria, and a fifty percent reduction of US forces in Afghanistan, it would seem that an increasingly isolated Israel could pose a problem for global contention.

Israel is a nuclear power, and could at any time attack Tehran, Iran. If this were to happen, we would see a full-scale war in the Middle East unlike any that America has previously involved itself in.

Americans are tired of wars in the Middle East, and they're growing tired of financing the welfare of Israel as well.

Congress unilaterally agreed to a $38 billion dollar aid package to Israel recently, yet refused to give $5 billion to build a wall along the US Southern border with Mexico.

As part of that $38 billion packages, an Israeli family of four will receive upwards of $23,000.00 for the nearly eight and a half million total residents of “Israel.” Americans had no idea this was even happening.

Currently, American men and women who have worked their entire lives and live off SSI are lucky to bring home $650/month, but the US government has agreed to give a foreign people $23,000 of our hard-earned tax dollars.

That foreign aid, alongside the defense budget of Israel which is supplemented by Americans, continues to be used to invoke tyranny on the Palestinian people.

This has caused a rift among Americans, including many blinded by Christian Zionism.

The BDS (Boycott, Divestment, and Sanctions) movement has picked up steam across the globe. As more footage comes out of Palestine showing the oppression by Israeli forces, more nations begin to back the BDS movement.

In response, Israel has sent $72 million into European countries in order to quell the rising tide of the great awakening.

For Palestinians, there is little support across the board, as the Israeli Lobby holds influence in almost every world body.

Americans simply want to be left alone and refrain from foreign aid, albeit the government undoubtedly will continue to fund Israel in the foreseeable future.

This author will continue to report the truth, as well as monitor the BDS movement, and all revelations coming out of the occupied land of Palestine. Freedom from tyranny is a human right.

Goldwater now blocked. You are fake news. As the screams of innocents getting their heads sawed off with dull knives are still echoing through eternity you write this shit. Fuck all that is Islam and kill all those that abide inside its cult. Maybe those that defend it as well.

This article is PURE BULLSHIT! There is no such thing or country called palestine. Gd designated the land to Israelites centuries ago. There is no changing this fact - get over it!
I had subscribed to the goldwater on the basis of the factual articles, until you had the audacity to print this one.
I have dropped my subscription and will encourage others to do the same