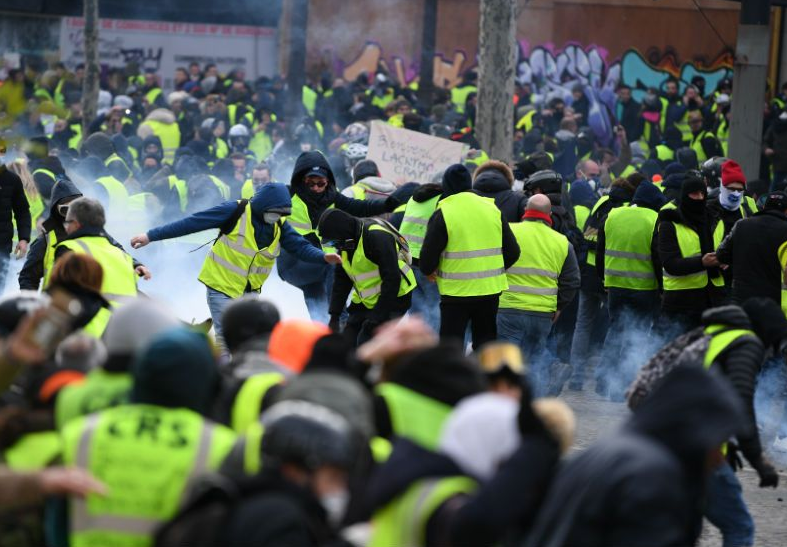 The ‘Gilets Jaunes’ (Yellow Vest) protests across France are continuing. Although the government of President Macron has made certain concessions, a small hardcore group of protesters still continues to block roundabouts, toll booths and fuel depots. For New Year’s eve, they plan another massive protest on the Parisian main avenue Champs-Elysées.

France has thus far received a considerable economic blow through the actions of the yellow vests. The total 'economic damage' of blockades and demonstrations is officially estimated at between 3 to 5 billion dollars. But the total bill can still increase considerably.

Retailers and companies have been struck by blockades, demonstrations, store closures and looting for six weeks. The damage is diverse and immense, according to an inventory made by financial newspaper Les Echos. One of the country's largest supermarket chains, Auchan, claims to have suffered a loss of 170 million dollars so far. One of its main distribution centers in the south of France was blocked by yellow vests for more than a month. As a result, eighty supermarkets could not be supplied.

🔴 We announce our presence, and in number, on the #ChampsElysées on #December31'st

🔥 We foresee a big surprise, and big actions. Be present with us!

Economic damage is also present on a smaller scale. The store of luxury brand Dior on the Champs-Elysées in Paris was plundered during one of the infamous Saturday demonstrations. Cost: 1.2 million dollars. The Paris opera had to close a day and thereby cancel two performances. "That costs us 500,000 euros," says deputy director Mr Jean-Philippe Thiellay.

‘Yellow Vests’ and the wages of violence https://t.co/HX3CHMdGSQ

The French government's repressive strategy deterred many pacific Gilets Jaunes from joining the protests in Paris. But not all of them succumbed to the pressure. pic.twitter.com/o40I0vKzPw

In Bordeaux, where some of the heaviest clashes between demonstrators and police were recorded, the hotels were empty in December. Mr Patrick Seguin from the local Chamber of Commerce admitted: “In ten days, half of all hotel reservations in the city have been canceled.”

Economic commentators warn to be careful about predicting disaster scenarios and blaming everything on actions of the yellow vests however. They remind the public that the French economy was already in a dip. "The shock caused by the yellow vests only reinforces the decline that was already going on," said Thierry Millon of the Altares research agency in Les Echos.

In the meantime the actions are still going on and the problems are not over yet. This week it was announced that entrepreneurs send staff home in great numbers because of the ongoing ‘malaise.’

Some 41,000 to 43,000 employees became temporarily or partially unemployed due to roadblocks and store closures. The government is donating 30 million dollars to temporarily help those people.

Moreover, the image of France is at stake. According to the trade association of hotel chains in Paris and surroundings, thirty percent of all hotel reservations for New Year’s Eve are canceled now that people know the Gilets Jaunes protests continue. One third of the cancellations comes from French tourists, two thirds from foreign tourists. For New Year's Eve, tables are still available in restaurants, even in the most popular restaurants.

All this after six weeks of actions by the yellow vests. President Macron’s government hopes that the New Year will bring about a new hope for France. But the ‘Gilets Jaunes’ vow to go on till the end or, as they see it, until ‘Macron démission’ (Macron’s dismissal).

Wonderful story. I can't think of a better target than a Dior store.