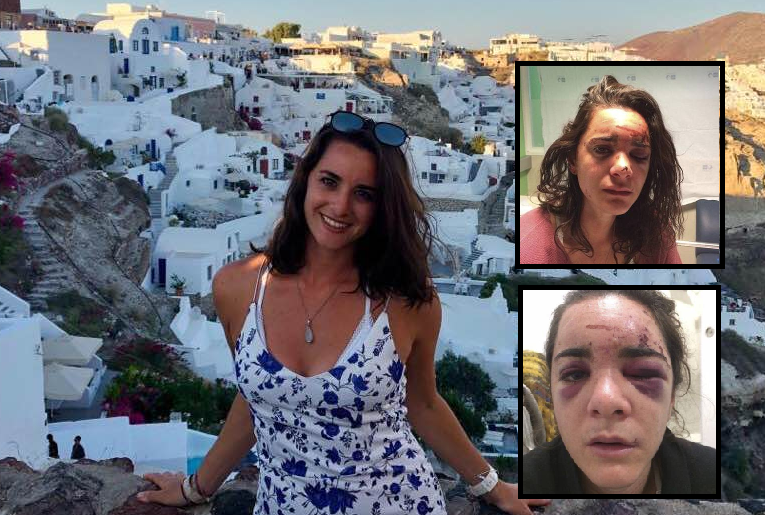 Just as Spain is going through the brutal Laura Luelmo murder investigation (the 25-year-old Spanish teacher who was raped and murdered while out on a run, see our related coverage), a US student who has passed the last 6 months in the nation’s capital Madrid has now also revealed just how dangerous Spanish streets have become in recent times.

American student Miss Andrea Sicignano (27 years old) has been studying and living in Madrid since last summer. She had a wonderful time there, until she was brutally abused and raped.

#Breaking: An American women exchange student who went to #Madrid in #Spain after going out, got brutally beaten and raped by an migrant! The suspect kept beating her and then raped her until she decided to play dead, that is when the suspect left, and she made a run for it! pic.twitter.com/yeZvxJ8scC

After going out, Andrea, who had been drinking too much, got into the wrong bus by accident last week. She landed in a part of the city unknown to her, got out and sat down in the bus shelter to figure out how to get home.

A man approached her and said he wanted to help her, but suddenly became violent. He beat Andrea, who initially fought back, terribly.

Her name is Andrea Sicignano. She wrote about it. Its also confirmed by police. It took me like 20 secs to find it. Instead calling people "Mr. Fake" change Your account name to "Mr. Idiot".https://t.co/r9JAI1ym2q

“I was lost at 4am, and all public transport had stopped running. I needed help and this man assured me he could help me get home,” she writes in her powerful account of the night’s events.

“It’s unclear exactly what happened next, but as soon as I started to realize I could be in danger, I tried to leave. But this man became forceful and violent towards me,” she goes on.

“As I fought, he started to beat me. I was screaming and fighting with all of the power I could muster. I desperately tried to reach for my phone but he called out in Spanish, ‘I have your phone, you can't call anyone.’

“I was sure he was going to kill me,” she continues. “Eventually I closed my eyes. With the hope that he would stop beating me, I pretended to be dead. I prayed that when I opened my eyes he would be gone. I don’t know how much time passed before I finally opened my eyes, but when I did, he had disappeared.”

Finally, she writes: “He raped me.”

Once he had left, she sat up and retrieved her things. Then, barefoot, she ran through the deserted streets, shouting for help. “I was waving frantically, and yet three or four cars drove past me,” she recalls. “Finally, one stopped. I ran to it, screaming. Blood covered my face, hair, and jacket. A kind stranger – whom I’ll never have the chance to thank – called the ambulance and tried to soothe me while we waited for them to arrive.”

According to a Madrid police spokesman, Miss Sicignano indeed reported the attack on December 9.

Three days later, thanks to an investigation by the Family and Women Unit (UFAM), the suspect was arrested in Carabanchel. He has a police record, though none of his nine prior offenses are for rape.

drag the globalists into the streets to be sawed in-half!

Victim number 118,346,798 to feminism. What was she doing alone at 4am, drinking, in a foreign nation? She is lucky that she still has her head.

When are these women going to learn??

Super American Feminist should of been able to kick his ass. Forgot Testosterone is superior to Estrogen. Has been and always will be!

I am assuming that the rapist was an African migrant, since they are carefully hiding his identity.

if i had a daughter, when she got old enough, i'd show them crime-scene photos of tortured and murdered women. even as a man, i'm very cautious and stay armed at all times.

Drunken slut gets diversified at 4 a.m. Why is this even news? Are we going to report on algebra next? 2 plus 2 equals four; Ni99er plus drunk chick equals rape. Simple math really