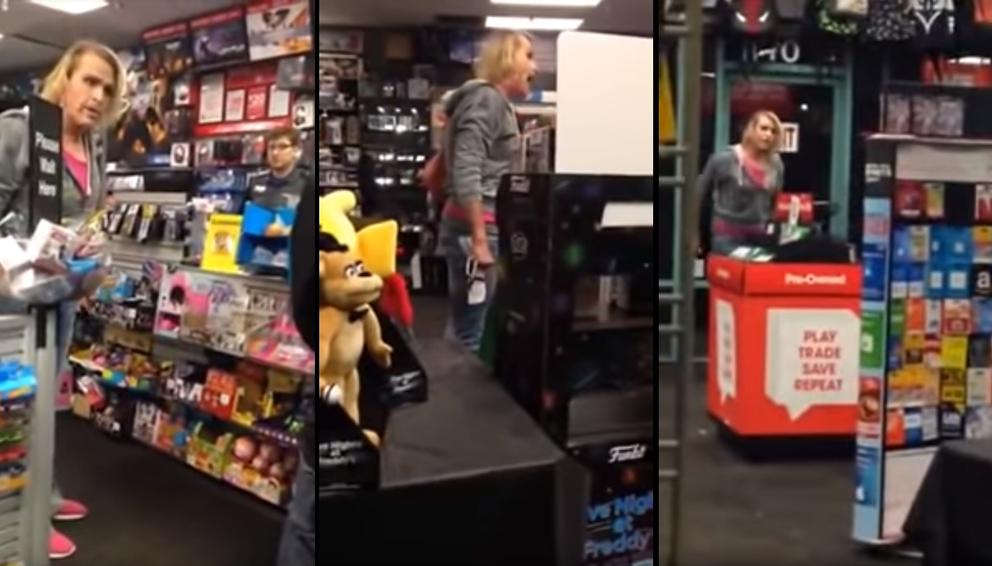 It's 2018, and everybody has the right to choose to be whatever gender they want. If your a full grown man in your 40s and you wake up one day deciding to be a woman, you can dress like a woman, style your hair and makeup like a woman, and demand people refer to you as a "she." Working in retail is no easy task, and we've seen many videos come out of Gamestops where customers freak out, but this latest video is something else entirely.

A full grown man, with shoulder length, dyed blonde hair, is dressed like a woman and demanding that he be referred to as she after hearing the employ call him a "sir."

There is something disturbing about a full-grown white man dressed as a woman yelling in a baritone voice that he is going to call the wrath of the entire LGBT community down upon a Gamestop store and promises the employees "they will lose money." How does he get to have his cake and eat it too? White males are supposed to be a part of the problem and the oppressive patriarchy, aren't they?

So why is this white man allowed to walk into a store, throw a tantrum in public with mature language in a children-friendly store, and then threaten violence directly to an employee before kicking and damaging property in the store? If he were not dressed in woman's clothes would he have been allowed to get away with that? Or would he have been tackled by a bystander until mall security and eventually police arrive?

Related coverage: Colorado Next State To Allow "X" For Gender On State ID

Oh, it's because he identifies as a woman. Identity politics to the rescue in place of any personal responsibility or human decency. Is this the kind of behavior and thinking that we want to be reinforced in children and young adults going to far-left dominated schools? As the man, or woman, or whatever it is finally walking out they decide to demand the number for corporate. After a brief exchange, the pussified excuse of a man behind the counter agrees to give the number.

As one last final burn on the way out, the transgender man shouts "I’m going to tell the entire LGBT community about this, and you’re going to lose money over this." Aside from the identity politics, this type of behavior does not make the LGBT community look good at all. They should disown this man and call him out for his violent outburst and verbal harassment.

perplexing does one need and id tag to be addresses as he /she? hum ? what if the person was an X or a Y combo ? sorry what /how does / ok ? hum ..perhaps stores shut down ? hum products from the makers need to list products for he/she hum extras .. how would anyone know what one is ... ? and peanut allergies / etc will protests and nasty ones ?? so frustrating yet thank you to the store for providing many selection of products and the product makers.. this articles is way out of my league .. so perplexing ~ ? power trippers on the edge of self awareness ~ sorry no tissues sold in stores ~

You womeeenzzzz you be so strong. When will it be your locker rooms, playing touchy feely with you!!!!! lolol

Pretenders just pretending.. we used to call people like that lying a$$h0les. They even have a disease named for the real mental ones!

He's a sick puppy, put him in his kennel.

I am tried of this PC BS of playing with words to deflect from the truth.

IT is Not Trans-gender
IT is called a Transvestite when when a guy dresses up and dolls himself up as a Female. aka a TYRANNY.

Probably in a bad mood after his “lesbian” real girl dumped him. It probably felt real good for “her” girlfriend that she didn’t have the inconvenience of buying a “Steely Dan”.

He is a man

What was s-he going to show that guy in the parking lot?

IT needs to get LAID

That mentally ill creatures fantasy is not my reality. I will address him as I see him. If he doesn't like it then he can just get over it or do something about it if he dare.

seriously? this looks like a set up more than anything. jesus. this DUDE looks and sounds like a dude. the guy is just a dude with lipstick. If i were that employee i'd say "Ok, now stop your whining you goddamn decepticon" when HE starts going off again "Ok Starscream get the fuck outta my store before i slap you" fuck that guy.

He should have threw a more convincing display of being a woman and took down his pants, cut off his genitals and proclaimed the blood was his menstrual cycle.