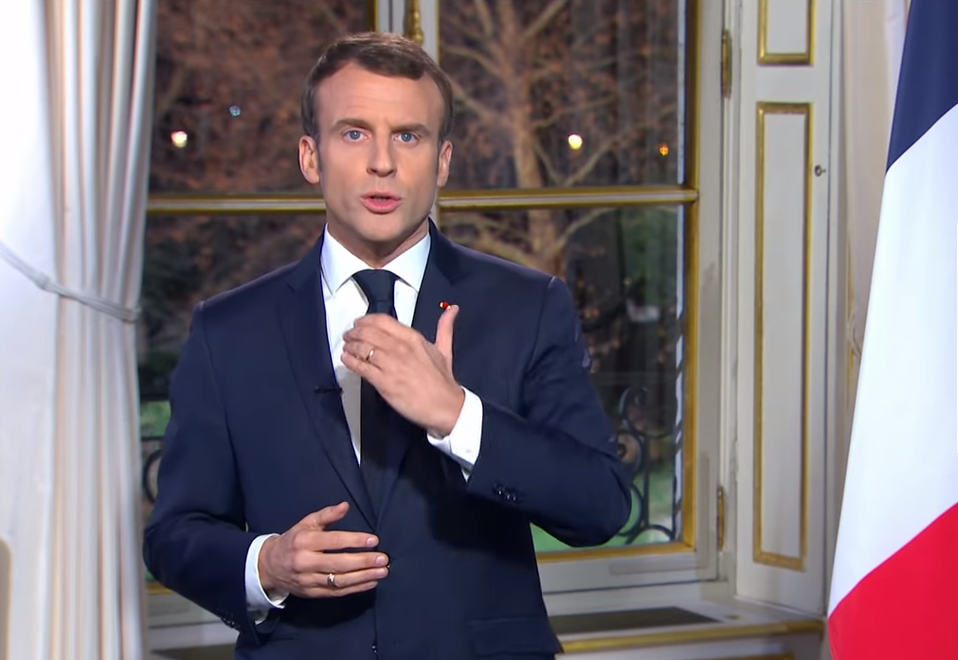 French President Emmanuel Macron used his traditional New Year's Eve speech as a very direct warning to the ‘Yellow Vest’ protesters, without ever naming their movement during his comments broadcast around France.

Mr Macron, standing up while delivering and seen making angry arm gestures, sounded a warning to the French, claiming that ‘extreme elements’ had started to mingle among what he called ‘anti-government protesters.’

The French President furthermore promised to keep order "without complacency" and decried the self-appointed "spokespeople for a hateful mob."

The ‘Yellow Vest’ movement has been protesting in most French cities for seven weeks now, forcing Mr Macron’s government to make concessions in terms of taxes and benefits payments. He also had to refocus his attention to domestic matters whilst he had profiled himself as a new European leader in his first year in office.

So far, six people have died and some 1,400 have been injured since the widespread protests over fuel tax rises erupted.

The French President suggested that the anger at the root of the "yellow vest" unrest, so named because of the high-visibility vests worn by protesters, showed France was "not resigned" and wanted to "build a better future."

Then, in a surprise turn, he claimed that the movement had by now been hijacked by extreme elements who sought to speak "in the name of the people."

“Those who claim to speak for the people, but in fact speak for a hateful mob - attacking elected representatives, security forces, journalists, Jews, foreigners, homosexuals - are quite simply the negation of France,” #France@Elysee@francediplo_ENhttps://t.co/cyldlKW3ZE


"In fact they are only the spokespeople of a hate-filled mob and they target elected politicians, the security forces, journalists, Jews, foreigners and homosexuals."

"It is quite simply the negation of France."

Warning French citizens of ‘fake news’ which he claimed was spreading, he reminded the French population "not to forget that you can build nothing on lies".

Left-wing and right-wing leaders in France felt they were being addressed by Mr Macron’s words and reacted harshly in response.

Mr Jean-Luc Mélenchon, of the left-wing political party ‘La France Insoumise’, claimed that the French ‘President of the rich had put up his smoke-screen once again,’ and urged him to ‘spread the wealth’ rather than to tax the poor.


Ms Marine Le Pen, leader of the right-wing Rassemblement National (the former Front National) went even further and claimed that ‘this President is an imposter… and a pyromaniac” (referring to the many fires which the French capital has seen in recent weeks).

i hope that The Vests get a hold of that baby-faced pos and slowly cut his head off, muslim style.

---“ are quite simply the negation of France,”---
Obama tried this scam but worded it differently: "this is not who we are..."

SPEAK FOR YOURSELVES, SCUMBAGS.

Of COURSE crowds are "attacking" Pols, Jews, and Homosexuals, but just the ones on "His Team" for A New World Order.
There are no "special exemption" cards.

French people protest their way of life being snuffed out. This fool says the yellow vests only target jews (zionists), politicians, foreigners, and homos! You mean the people who are most responsible for attacking the west and our way of life? Imagine that...

MACARONI'S WHOLE CAREER HAS BEEN BASED ON FAKE NEWS AND LIES TO THE PEOPLE! THE LION HAS AWOKE AND WE AINT IN OZ ANYMORE MAGGOT MACRON. HOW DARE YOU SAY WE MACARONI... YOU AINT ONE OF US. YOUR NOT EVEN FRENCH OR EUROPEAN. YOUR A CARDBOARD CUTOUT WITH NO IDENTITY!!!! AND YOU AND YOUR GLOBALIST FRIENDS SEEK TO STRIP EVERYONE ELSE OF THEIRS ALSO, SO YOU ALL CAN PLAY KING OF THE HILL.. THE WHOLE WORLD HATES YOUR GUTS!!! WE PRAY CONTINUOUSLY WITHOUT CEASING FOR YOUR DEFEAT AND HOLY JUSTICE!!!

He is reaching deep.

Less he forget France Government has a history of killing Jews and Homosexuals.
It turned in almost 100,000 Jews and almost 20,000 Homosexuals to the German National Socialists (Nazi's) as early as 1939.

Maybe he should hide behind his Old Lady's skirts some more. Can't get much older than Granny Macron

Macron needs to depart, with, or without his head, but he needs to go