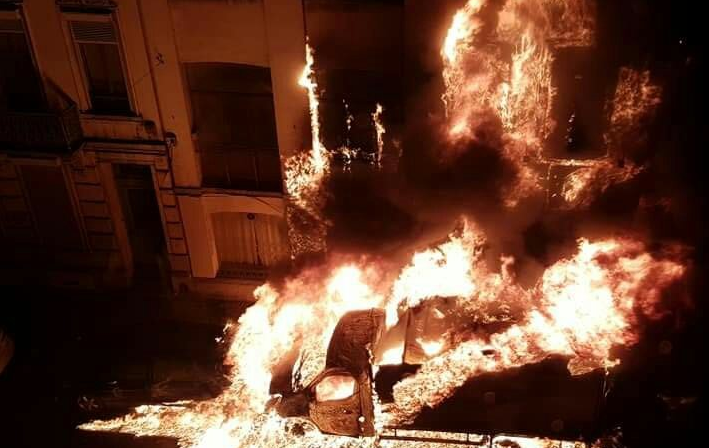 US President Donald Trump described EU capital Brussels as a ‘hellhole’ during his presidential campaign back in 2016, and since a few years, it is indeed living up to that reputation. Whereas 2018 saw the replacement of a mayor fired over corruption, various riots, youth attacks against police, small-scale terrorist attacks and an upsurge in overall crime, it was New Year’s Eve celebrations in Molenbeek that really topped it off.

During an ordinary weekend night, the fire brigades in Brussels, which houses both the Nato and European Commission headquarters, are called upon around twenty times on average.

New Years Eve celebrations in #NoGoZone #Molenbeek aka #JihadiCentral
This is a European capital city, the home of the EU Parliament yet it’s now a third world sh*thole

Fires, firefighters attacked, ... "young" #Molenbeek presented us their wishes in their own way. A new illustration of the areas of lawlessness in Brussels and the charms of "living together". pic.twitter.com/hRBXHhJvJE

During an intervention in Molenbeek, the commune where many of the ‘November 2015 Paris’ terrorists resided, a fire truck was pelted by "party-goers."

The mirrors and windshields of the fire truck were ripped off. The firefighters present were not injured, but the Brussels fire brigade has filed a complaint against unknown persons. They ask that the guilty be identified and prosecuted as the firefighters involved protest to serve the commune further unless the behaviour of residents changes.

An unknown young man was stabbed to death at 3 am in the commune of Schaerbeek. The victim was killed during a confrontation between two youth groups at the Liedtsplein. The reason for the stabbing is not yet clear.

The young man was transported to hospital, but died there in the course of the night, reports Mr Gilles Dejemeppe of the Brussels public prosecutor. "The victim has not yet been identified, but it is probably a young man who may have been illegally in the country."

The police have not yet arrested a suspect.

ALL ORCHESTRATED BY YOUR LOCAL GLOBALIST CABAL. THEIR GAME IS THE MOVIE THE PURGE. THEY ARE THE NAZGUL!!!
DEATHMONGERS BLOODSEEKERS EVIL LOVERS OF THEMSELVES. THEY IMAGINE THEMSELVES KINGS OF EARTH. MENTALLY PERVERTED DEMENTIA.

This is the globalist hellhole that the Bush/Obunghole and Clinton crime syndicates plan for us all...replete with roving bands of rapey niggers and dune coons...

THE 1% NEED TO BE STRIPPED OF THEIR FAKE ASS IDENTITY, CAUSE THEY DAMN SURE ARENT WHO THEY THINK THEY ARE. AND THEN STRIPPED OF ALL THEIR STOLEN ASSETS. PUBLICLY PERP WALKED FOR THEIR CRIMES AGAINST HUMANITY, AND THE OPENLY, PUBLICLY, AND TRANSPARENTLY RECIEVE RIGHTEOUS AND LAWFUL JUDGEMENT FOR THE WORLD TO SEE!!! TREASON AGAINST MANKIND!!!