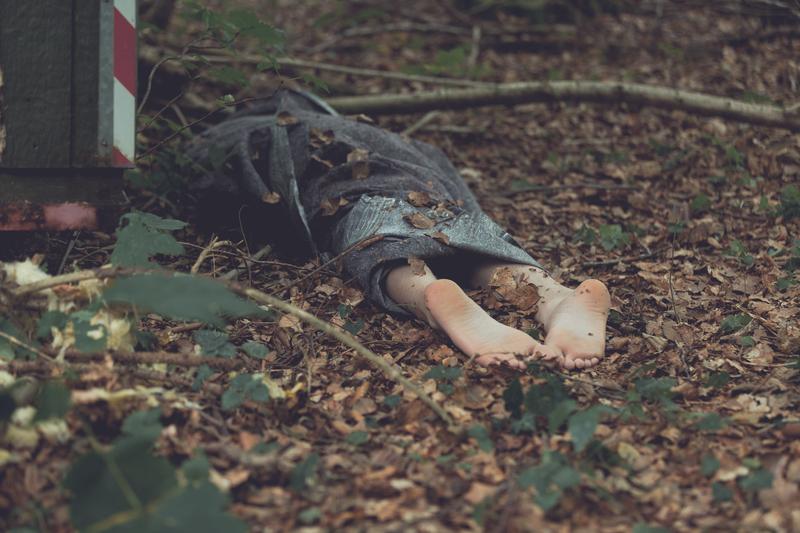 Revisiting The Ramseys: What Really Happened To JonBenet?

A few days ago Jon Benet Ramsey's name popped up in the news cycle. A "confession" had occurred. I'll admit I ignored it. As it turns out, so did the Boulder, Colorado police department.

Gary Oliva, 54, claimed he was responsible for the death of the 6-year-old pageant queen back in December 1996. Oliva picked up the "World Exclusive" from Star magazine in January 2018. And yes, in case you're wondering, I do occasionally read the gossip outlets. Once in a while, the Enquirer and their ilk have some real dirt with palpable evidence apart from "sources close to" he said-she said nonsense.

My guess is Oliva is looking for some fame and perhaps fan letters from women with hybristophilia (paraphilia wherein which one finds themselves attracted to murderers, rapists and other beyond-transgressive types). Regardless the reason for the story popping back up in the news cycle, it had me reaching for my copy of Dave McGowan's Programmed To Kill: The Politics of Serial Murder, specifically the chapter on JonBenet and the farce of an "investigation" surrounding it.

JonBenet Ramsey was sexually abused and horrifically beaten. Some investigators believed she looked "re-dressed" after the incident. Not only had rigor mortis already set in by the time she was found in the Ramseys' basement, but authorities reported noticing the strong scent of her decomposing body. Had she survived, she would have been nearly 30 today.

Dave McGowan wrote extensively about this case (and many others) in his book Programmed To Kill: The Politics of Serial Murder.

Jon Benet's parents were suspects. John Ramsey was the son of a WWII pilot and, himself, a Naval officer and pilot stationed in the Philippines in the 1960s. His company "Access Graphics" was bought out by Lockheed-Martin, one of the largest military-defense contractors in the world.

Her mother Patsy wasa beauty queen in her time. McGowan relates how a Miss America judge once referred to her as "a little automaton."

Patsy's father was the vice president of Access Graphics which, even after the Lockheed-Martin buyout, was headed by John. According to Cyril Wecht's book on the case, Patsy's family, the Paugh's, along with John "exerted considerable influence" over Patsy Ramsey.


The night after attending a party with family and friends, John, Patsy, and brother Burke, JonBenet was put to bed. The next morning, sometime after 5 am Patsy headed downstairs to find a ransom note. It was, according to her story, after this that she checked her daughter's room to find her missing and called 911.

At 5:52 am Patsy placed a call to 911. You can hear her plainly saying at first, "Hurry, we need an..." as if to say "ambulance" before catching herself, pausing and calling for "police." In reference to a kidnapping.

Three days p, the Ramsey residence called 911 on two occasions, the first being on the night of December 23. The Ramseys were throwing a party featuring 100 of Boulder's movers, shakers and high society. The guest list, nor the reason for the call the night of the party has never been shared with the police.

One known attendee was Bill McReynolds, who played Santa for the party. On December 26, 1974, Bill's daughter had been abducted with a friend who was staying with her for the night. Bill's daughter was released unscathed apart from being made to watch the sexual assault of her friend. No arrests were made, no charges ever filed.

Bill's wife Janet would later write a screenplay, "Hey Rube," about a young girl who was abducted, tortured and murdered before being discarded in a basement. In 1978, New York Times would refer to the play's subject as that of a "ritual killing," specifically that of Sylvia Likens.

A longtime suspect in the JonBenet Ramsey case has allegedly confessed to a former classmate to killing the child in 1996. https://t.co/R03KTJ2Fok pic.twitter.com/6MF4VlQepA

Bill spoke at the memorial service and mentioned several other children he had known before their similarly unexpected deaths. According to an interview, McReynolds would carve JonBenet's name on a harp alongside the names of three other young girls he was close to that had died. For what it's worth, the information regarding McReynolds' harp is hard to find online. The article is no longer available at Boulder Weekly online and archive.is nor Google cache. Most of the most recent snapshots at Archive.org are also blank, but if you jump back about 15 years, a copy of the original can be retrieved. Full article is linked above.

Bill McReynolds wanting the glitter JonBenet gave him mixed in with his ashes is just so creepy.

On the Ramseys' list of suspects, McReynolds loomed high.

The kidnappers in their note just happened to ask for exactly $118,000. Luckily for the Ramseys that was the exact amount of John's recently received Christmas bonus pay.

The rambling letter purported to be written by the kidnappers mentioned being part of some "small foreign faction" and describes a call they were to receive that morning which was, incidentally, never made.

Allegations that the family intentionally obstructed the investigation by tampering with the crime scene are practically moot when you consider the fact that, for whatever reason, police allowed the crime scene to be breached by the family, friends even the pastor.

JonBenet Ramsey was murdered by theirs parents and brother!
the father belonged to net of pedophile
MUST READ TO DAVID MCGOWAN
'PROGRAMMED TO KILL'📖🌠🌠🌠
Chapter- JonBenet Ramsey
FORBIDDEN INFORMATION

Also, other irregularities came to light; such as the coroner's late appearance, around twelve hours after the body was found. The coroner spent only ten minutes examining the body. How was the couple not initially interrogated separately?

Police charged John Ramsey and his friend, oil company executive Fleet White, with "searching" the crime scene. John and Fleet, decided the basement might be a good place to check despite White claiming he checked the basement and found nothing out of the ordinary.

John Ramsey then picked up his daughter (further spoliation of evidence) and removed the tape from her mouth. McGowan points out that the autopsy reports no tape residue.

An officer at the scene was quoted for a piece in Vanity Fair as noting how John didn't cry coming up, but laying her down "he started to moan while peering around to see who was looking." Neither of the Ramseys attempted to comfort or console one other during this charade.
As for how liable to be true any of the "official" stories from the Ramseys are, I'll defer again to McGowan:

"The unlikely scenario that we are asked to believe is that an intruder entered an occupied home seeking a victim to abduct, but then inadvertently killed his intended victim, at which time he decided to hide the body in the basement assuming that it wouldn't be found. He then searched the house for pen and paper before composing both an unfinished draft and a final ransom note, the latter of which rambled on at some length."

Dr. Robert Kirschner of the University of Chicago, a child abuse specialist believed it was quite possible that JonBenet had faced repeat abuse long before all that occurred the night of her murder.

"The thing that concerns me is that the hymenal opening is measured at 1 centimeter, which is too large," said Kirschner. "But if in fact that's the real measurement, that's about twice the diameter it should be. Usually a hymen in a young child like this should be about 4 millimeters, so without seeing the autopsy photographs, it's hard to say whether it could be an inaccurate measurement, prior injury or normal anatomic variation."

Despite the fact that the Ramseys were uncooperative and stymied any attempt at a thorough investigation, the Ramseys would be fully cleared due to "DNA evidence" that has since been called into question. Former District Attorney Bob Grant, Stan Garnett, Boulder County DA. Bill Owens, the Governor following her says he was "stunned" and "appalled" at the Ramseys being cleared. Former colleagues and peers in Colorado agreed that the whole situation was, at the very least "irregular."

It's likely that the truth will never be revealed regarding who raped and murdered JonBenet Ramsey. It's quite possible that there is no single culprit but with the evidence that is available, it's plain to see that after the crime (or rather series of crimes) was committed an apparent series of crimes was committed that led to the truth being forever obscured.

images ... The Paugh family + patsy Ramsey google .ca ~! news was worldly ~
also images of alex hunter district attorney google .com getty~! images
w w w . bustle . com / articles / 1 8 3 666 - where is alex hunter now (not full link) yet 20 yrs mark ~
the denver post dot the com march 10 2000 yr plausible. oh gosh hunters sone apparent o d 'd in 2010 yrs? (3w) dot the daily camera dot com news ci _ 15027602 by erica meltzer camera staff writer may 5 2010 .. if the digs have a hint of the p g effect , nothing forgotten and what really is time... the lady cop was fine , the ones that left her with not help for hours were gutless or part of something. funding's for local projects .. and buddies well nothing is forgotten not in their minds.. it will eat them to the bones. good thanks for posting . the updates that somehow are still very active...

my thoughts on the above story are that someone should remove the story due to it's fundamental grammatical errors that render it nearly impossible to read. i'm guessing that there was an (over) generous amount of cutting and pasting "facts" used to compose this story. i spent so much time reading and re-reading sentences and paragraphs only to decide in end, it wasn't worth reading

>>93659
If you have trouble reading, there are ESL classes if you can afford them you may be interested in. I just read this article a second time through and don't see any "glaring grammatical errors." That said maybe it's incorrect based on rules from your native language?

A message to all niggers, faggots, and Satanists: Judgement day is on the horizon. The firey furnace of Hell awaits your unholy execution. Sodomites and coloreds, your day comes. To all who wish to join my struggle, rejoice, for I welcome all. For all who love, queers and niggers beware, you shall burn forever more. Love, Jesus.

>>93664
And here's a message to all assholes who try to use the bible to justify their hate. God is LOVE and Jesus commands us to love even our enemies and those who would do us ill.

So for that reason, I forgive you anon 664 and pray that God softens your heart and opens your eyes to what you're doing wrong and how it hurts not only the world but yourself as well.

When you have $$$$, Elites, and Politicians involved in any crime we seldom get to the real truth.

But in that 1 in 1 Million chance that we we luck up and do, then they never seem to pay with their lives, or do prison time. They get to purchase a Get Out of Jail Ticket using their wealth and position. Then deduct it on their Income Taxes.

Any father that is comfortable with the sexualization of his child, as was done with Jon Benet, is suspicious in my book. Add the bed-wetting and lack of emotional attachment by the parents and I can't help but thinking that they are complicit