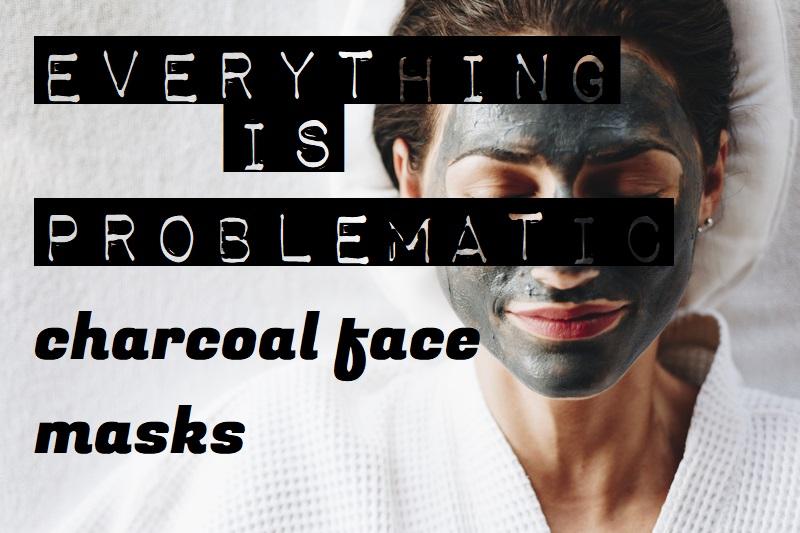 Everything Is Problematic: Charcoal Face Masks

Late last month, a college professor labeled the Disney musical Mary Poppins racist calling the chimneysweep dancing scene "a parody of blackface." As if to one-up the New York Times Op-ed by professor Daniel Pollack-Pelzner, some folks this week have upped the ante as they foam at the mouth claiming that charcoal masks are also a form of blackface.

Everything Is Problematic: Little Bo Peep

Poe's Law is in full effect as it becomes more and more difficult to ascertain what is genuine outrage and what is the result of trolls mocking said outrage by feigning upset over ridiculous non-issues... like Katy Perry's recently discontinued line of shoes which have also recently been cited as an example of blackface.

As is the case so many times, it's not even the group of people supposedly "targeted" getting offended in many cases here.

If my face mask picture offended anyone I apologize, I’ve been pretty low lately and so I was literally just trying to enjoy a charcoal mask (which happens to be the color black, which is basically the only kind I use)


All this in what has got to be one of the most questionable Black History Months in recent memory. What with Jussie Smollett's hate crime hoax, the governor of Virginia admitting to wearing blackface, his African American Lt. Gov. being accused of sexual improprieties, the Gucci "blackface" scandal, the all-white Adidas "Harlem Renaissance" sneaker, Liam Neeson's admission of wanting to kill a black man after a friend of his was raped, Jennifer Lopez headlining a Motown tribute and (one of my personal favorite flukes of this Black History Month) Bill Cosby comparing himself to Martin Luther King Jr. or Gandhi as a "political prisoner" I'm sure some folks would just as soon have a do-over.

Everything Is Problematic: With Gendered Or Non-Gendered Language You Just Can't Win

I use this charcoal face mask for men and this is getting bloody ridiculous !!!! How is this racist ?? Sorry to all you snowflakes out there but we would like clean skin and we won't stop using it !!!!!! I won't stop using it because it's the only mask that actually works for me pic.twitter.com/AwE2Zx8NTV


Everything Is Problematic: Christmas Movies Edition

At what point does the stupidity stop?
Attention Everyone: Charcoal Face Masks Are Now Racist#charcoal #facemask #racism https://t.co/mQhVXlqJC4


Many have, rightly so, questioned whether the whole thing is intentional parody or satire or if people can really be that oversensitive.

Is this satire?? Because using a peel off charcoal face mask for skin care isn't racist. People are taking this too far now.


Though the Daily Mail article was the catalyst for the most recent debate, there is plenty of mention of how charcoal face masks may or may not be racist. Once again, it's not always that easy to tell what is a joke and what isn't.

I wanna do one of those charcoal face mask but I don't wanna be racist :///

I'm trying a charcoal face mask. I look hella racist, but it's clearing the hell out of my pores.

Just wait till they find out about all the charcoal face mask videos on the internet. There's going to be a lot of racists to be hunting down.


At least a few people are willing to admit that context matters. Face mask? Not racist. Face mask with racist captions? Probably racist.

currently having a debate on if charcoal face mask are racist or not pic.twitter.com/JWJsRzs3k6

Just wait till they find out about all the charcoal face mask videos on the internet. There's going to be a lot of racists to be hunting down.

Charcoal face masks are fun and cleansing and all but if you’re going to post a picture of you in the face mask, don’t put some stupid ass caption like, “I knew I was gonna go black,” that’s not funny, it’s not cute, it’s racist.


Everything Is Problematic: Christmas Music Edition

Another important thing to remember that we always try to warn folks about in our Everything is Problematic segments: just because it's not considered inappropriate this week, doesn't mean it won't be next week, next month or next year. Case in point:

the jigaboos are out-of-control.. yes, again....

Yeah and the Wayan brothers should be harmed for their insensitive movie, “White Girls”. I only wish this kind of revealing insanity of the left will go on and on. Maybe Trump could serve three or four terms like FDR if three quarters of the states throw out the presidents term limits.