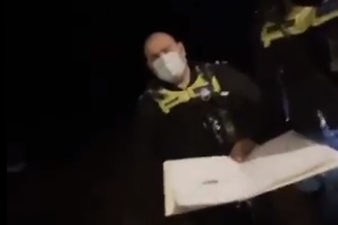 In true Orwellian style, the Australian police made a nighttime visit to a citizen's doorstep questioning him about a Facebook post he made six months ago. The post was simply a photo of him at a protest. No pornography. No threats.

While these officers may be wearing the same uniform as those who once served and protected citizens, they should not be considered police officers any more. The nature of their job now defines them as something entirely different.

As such, their presence and tasks should be met with extreme (non-violent) hostility. If they continue, it is only a matter of time before that first shot is fired and the war against tyranny begins. God help them.