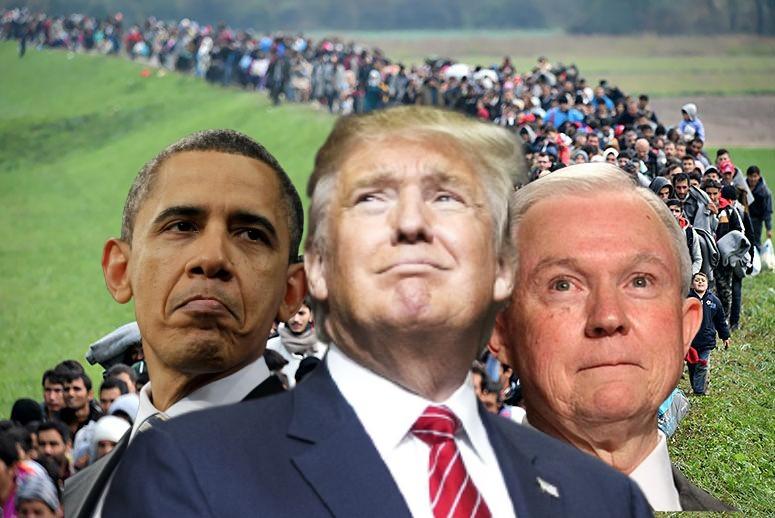 While we're all applauding the actions or the Trump Administration on ending DACA, there's a few underlying points that we should highlight to begin with.

In fact the entire premise that a President of the United States of America can act without Congress should scare everyone on the left and the right.

For all the claims of “fascism” that's essentially the definition, likening the President to some third world dictator who can act without the people's opinion or ideas in mind.

Deferred Action for Childhood Arrivals was an <i>illegal</i> Executive Order to begin with.

Let us not forget that violating federal law through an Executive Order is actually Unconstitutional.

The Constitution states it clearly in Article I, Section 8, Clause 4, “To establish a uniform Rule of Naturalization.”

Article I denotes the enumerated powers of the Legislative branch, which would be the the House and Senate, or Congress.

Article II of the Constitution denotes the enumerated powers of the Executive branch.

In signing the EO for DACA, Barack Obama in turn exceeded his enumerated powers and established an unconstitutional policy.

That's right, he became a fascist (a word liberals love to throw around about the right and our President of the United States of America), but Obama actually was a legitimate fascist by signing this illegal EO.

It in effect was not only illegal, but Barack Obama's own advisers expressed concern about the legality of DACA when it was signed.

It’s not up to the President Of the United States of America, no matter who that President may be, to decide that he or she wants to do something without the Legislative branch having input.

We do not have a Supreme Leader in America, we have elected officials.

By signing DACA and disregarding the Constitutional rule of law, in essence, it meant that Barack Obama was taking action without the consent of the governed peoples.

The American voters actually elect Representatives in order to be their voice in America, so that any disregard of the Legislative branch is a direct dismissal and disregard for the American people and their rights as citizens of the United States of America.

Immigration is not something solely to be decided upon by the President, we have a system of checks and balances, and Congress has its turn in the decision making process. This is how America is now and always has been governed.

To further exemplify this point, since the action taken by Barack Obama was taken by an executive fiat with the stroke of a pen, then it’s no longer considered binding upon his departure to begin with.

For similar instances simply take a look at the Joint Comprehensive Plan of Action, the failed Iranian nuclear deal, Granting “Obama phones” to the lowest income Americans, and most recently the Paris Climate Change Accord.

Those ideals which Barack Obama took into his own hands without using Congress become null and void the moment Obama was out of the White House.

DACA is no different, contrary to the cultural marxist left who somehow feels as if President Trump is overstepping his authority.

For all of the virtue signaling of the left, they say nothing as abortion kills tens of thousands of black babies, since they seem to want to claim minorities are under attack.

In fact they actually support the machine of death in Planned Parenthood that churns out the genocide of people's each and every single day.

It's typical liberal hypocrisy, combined with a dash of progressive failure and a heavy dose of radicalized Communism.

Barack Obama pretty much felt as if he had an absolute power in signing the EO on DACA, which technically he did since nothing ever came of his illegal stroke of pen.

By taking the action however, and avoiding Congress in immigration, he could have actually been penalized for it by Congress through impeachment. That's right, Obama should have been impeached for DACA.

As soon as DACA was announced, the ICE agents who believed that they were being asked to not enforce US immigration laws challenged it in court to no avail, albeit mainly due to the fact that the courts were (many still are) filled with marxist Judges.

It's not that we hate immigrants. It's not that we're bigots. Contrary to the memetics and the hard-line “You Have To Go Back” lingo we all enjoy spewing (it's true, they have to go back), we are a country made up of both law and order.

Jeff Sessions said it best today when announcing the end to DACA, “We are people of compassion, and we are people of law, but there's nothing compassionate about the failure to enforce immigration laws.”Barack Obama’s Executive Ord

There will now be an October 5th deadline for any new applicants for DACA. So they have plenty of time to apply.

Then there will be no renewals after those that expire after March of 2018. What this essentially means is if someone is approved right before, they could still remain in the United States for six months to two years, legally since they were approved.

We're not throwing immigrants out on their ass. We're not shipping them back in droves. They can still come back, but they must do so legally.

We should praise both Attorney General Jeff Sessions, and the President of the United States of America Donald J. Trump, for upholding the Constitutional rule of law in America and putting America first.

We are the dreamers. We have dreams too. It's time we take care of the American Dream for Americans.

Love the article. I think it is about time someone in our government decided to follow the constitution. We need our country back. I have no problem with legal immigration. Can you imagine the response to people trying to come into other countries illegally?

Thank you Donald J. Trump and the Trump Administration!

The problems is that liberals believe "the end justifies the means," so they truly don't care that Obama's overreach use of Executive Orders was unconstitutional and impeachable! It's time for congress to do there job and work on legislation that addresses the concerns of their constituents.

"We are the dreamers. We have dreams too. It's time we take care of the American Dream for Americans." Then tell your stupid president to stop hiring foreigners to work on his properties.