Obama Signs The ‘Anti-Propaganda’ Bill Into Law With 2017 NDAA

As the Americans were making merry and enjoying the holidays, the outgoing President Obama saw an opportunity to quietly sign the 2017 National Defense Authorization Act into Law, the law authorizes a $611 billion budget spending for the military inclusive of the dangerous Counter Disinformation and Anti-Propaganda Act which has been very controversial.

The bill is purely formulated to crack down on free speech and independent media under the guise of Fake News and Propaganda on the internet. The new legislation will give the government the power to crack down with impunity any media that it deems to be spreading propaganda, the legislation will also fund the counter propaganda endeavors; this is purely meant to choke the alternative media and independent journalists who are not blinded by the malicious oligarchist.

This new law is endangering the right to free speech and freedom of the press as guaranteed by the first Amendment to the U.S. Constitution. The founding Fathers are turning in their graves after Obama watered down the hard-earned endeavors to protect our liberties.

Obama has simply set the stage for the U.S. government to crack down on every media outlet that it deems as foreign propaganda. Obama issued a statement saying that he had signed the S. 2943 into law the National Defense Authorization Act for the fiscal year 2017 adding that the Act authorizes the appropriations for the Department of Defense and the Department of Energy national security programs. Obama emphasized that the law will facilitate the provision of vital benefits for military personnel and their families. He also pointed out that the legislation will continue many critical authorizations necessary to ensure that the U.S. is able to sustain momentum in handling threats such as ISIS.

It's clear as mud that this president ...as per usual has yet again "over stepped" his authority! And, I'm not at all surprised that he did it unbeknownst, or with the input from the American public! This is typical Obama at work yet gain in his ongoing attempts to undermine this nation. If, this has truly occurred then it must simply be completely eliminated, and struck from the records!

It is now 2021 and we see exactly what the obama osama bill was signed for! To undermine and overthrow any sitting President, or political opponent the deep state dislikes for whatever reason! We are seeing the rotten fruits of Obamas handy work! What do you expect from a Man who hates America and wants to fundamentally change just about everything! What do you expect from a person who has been taught to hate our country by radicalists and a man who wasnt even born in our country but lied about where he was born to get the Presidency! 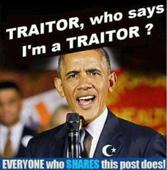