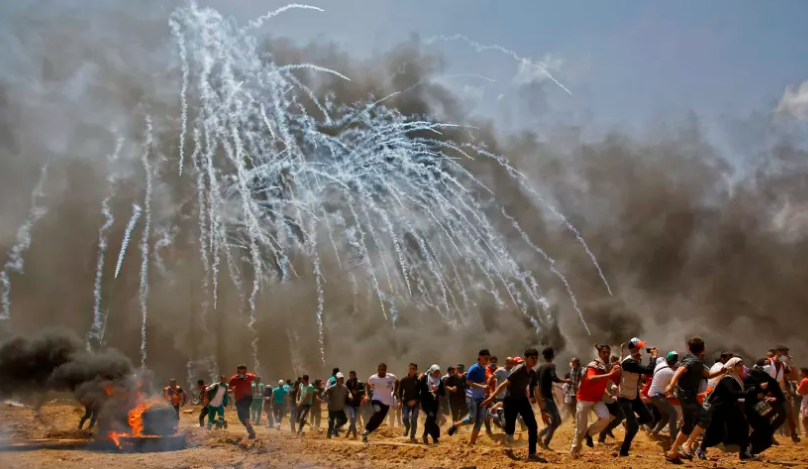 According to the Israeli army, some 35,000 Palestinians took part in violent protests along the Gaza Israel border against the opening of the US embassy in Jerusalem. The protests soon turned bloody as Palestinian officials claimed that so far 37 of them have been shot by snipers and some 1,600 were wounded, of which 500 with live gunfire.

The Hamas run health agency states that several children had already been killed in the culmination of the "Great March of Return" which had been happening for the past six weeks and now saw its grand finale.

Israeli officials meanwhile state that its troops were operating "in accordance with standard procedures".

As we reported earlier (see our related coverage), several top Israeli and US Officials will attend the opening of the new US embassy in Jerusalem, where many more protests are expected.

An Arab lawmaker in the Israeli parliament, Joint List chairman Mr Ayman Odeh, stated: "Within just a few hours, 18 people have already lost their lives. Every shot fired and every person killed aggravate the violence … Gaza has become a pressure cooker under which Israel stokes the fire."

“Israel shut the door, leaving behind a humanitarian crisis - and threw the keys to sea.”

Ali, who works as a teacher in Gaza, stated: "Today is the big day when we will cross the fence and tell Israel and the world we will not accept being occupied forever."

This was no protest! This was a RIOT & Palestinians meant Israel harm! They brought this on themselves, as usual! That they brought their children, knowing what the consequences could mean, tells you just what kind of people they are. Not one person had to die today, but Palestinians created this chaotic, violent riot so they could, once again, call themselves the victims. Do they think they martyred their children, when the truth is they caused their deaths⁉️

Can we shoot border hoppers now?

Nancy Stephens-King No. 26035- …brought it on themselves? So we should definitely be able to shoot the illegal caravan at the southern border of our country then., or BLM rioters. I wonder , should White European countries be able to test dna of immigrants to determine if they will be permitted to remain there permantly, or is Israel the only accepted ethnostate in the world.? Wake up goyim! Zionism is behind our great replacement.

The situation should have been such that the headline would've read, "1,600 Dead, 0 Wounded As Palestinians Protest US Embassy Opening."

Damn and Thank you Steve Kasian, for letting us know who you are. Of that there can be no doubt.