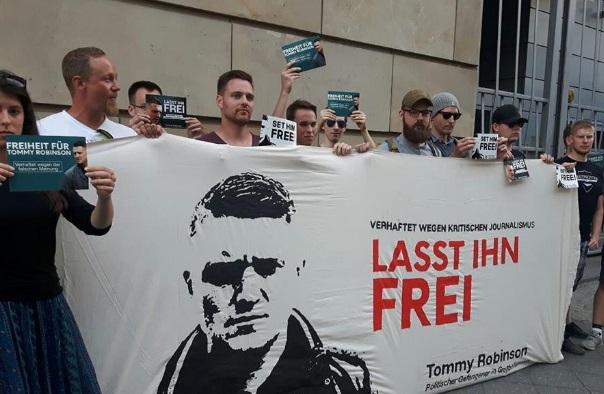 Not that it spilled out over all the front pages, but after two weeks of protests in Leeds, London and Manchester, the British ‘quality’ press, which saw it’s gag order relieved, is starting to come to terms with what the British ‘tabloid’ press has long recognized: the case of imprisonment of Mr Tommy Robinson has turned him into a martyr for the far-right, and has turned their conspiracy theory of an abolishment for free press in the UK, into a reality.

The martyrdom of Mr Robinson has by now taken on such a stride that this weekend one of the biggest Chinese newspapers (the South China Morning Post) even did an article about his case.

Gulfnews in Abu Dhabi is also discussing the matter. In Germany, Berlin police were surprised to see a (peaceful) rally asking for his release. The matter has gone worldwide.

Over in the US, his popularity ever since his arrest has only grown. The far-right activist and founder of the English Defence League, who is currently serving a 13-month sentence for breaking reporting restrictions at a jury trial had recently spoken at an event entitled Ground Zero, held on the anniversary of 9/11 where his then host, the activist Pamela Geller, has brought his case to light in the US this time round again.

<blockquote class="twitter-tweet" data-lang="en"><p lang="en" dir="ltr">The weirdest thing about the Tommy Robinson stuff is that angry Trump guys know more about the dreary parts of English post industrial towns than me. Just yesterday a MAGA guy asked whether I was aware of the massive grooming gangs operating in the Berwick on Tweed Tesco</p>&mdash; Hussein Kesvani (@HKesvani) <a href="https://twitter.com/HKesvani/status/1007964284222140416?ref_src=twsrc%5Etfw">June 16, 2018</a></blockquote>

Some 600,000 people have by now signed the petition asking for his release, which normally means the matter must be discussed in parliament.

Although British television stations like Sky and BBC are not openly discussing the issue, the UK’s Prime Minister Ms Theresa May must realize that with this kind of growing media attention, it is only a matter of time before she will hear the chant of ‘Tommy, Tommy, Tommy’ when stepping out into the public eye and the first question by a reporter during a live interview seems only days away.

2- petitions over 100k do not need to be discussed in parliament.

British law is not available under the EU! Once Brexit happens and British law is supreme, then the case against the EU's ligitimacy is fought and won, only then will British patriots be able to stand and fight for their country's future!