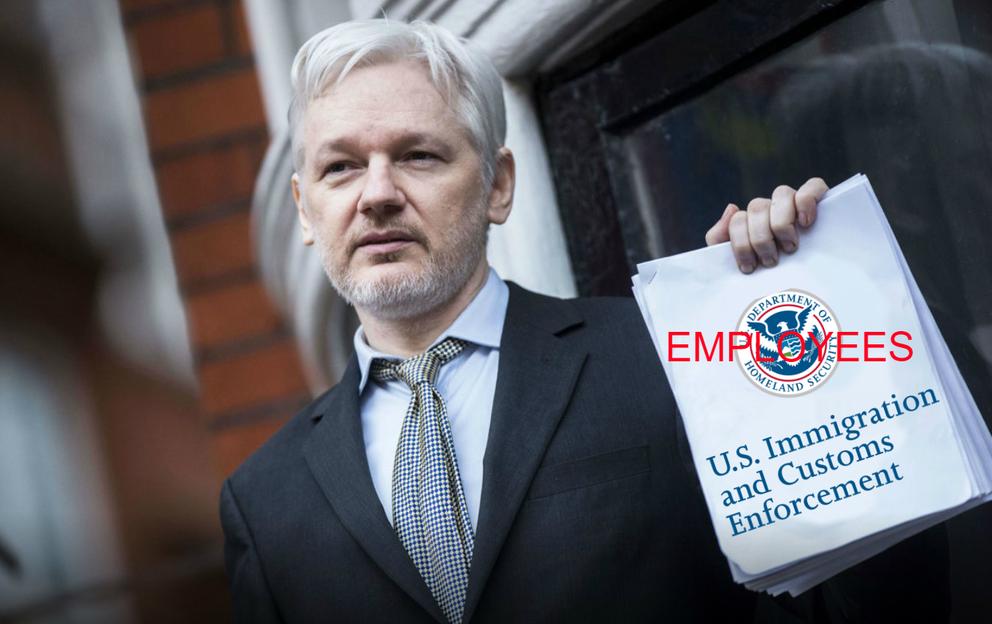 In the name of "increasing accountability," WikiLeaks has published a database of 9,000 current and former U.S. Immigration Customs Enforcement employees. The database was scraped from publicly available information and job history from sites like LinkedIn. ICE deportation officers, IT workers, human resource interns and legal assistants were all identified in the database.

WikiLeaks says the database came from a man named Sam Lavigne who is an artist and computer programmer in New York City and an adjunct professor at New York University. Lavigne said, "As ICE continues to ramp up its inhumane surveillance and detention efforts, I believe it's important to document what's happening, and by whom, in any way we can." The information was published on GitHub by Lavigne but they soon took it down. Lavigne did the same with Medium but the post was removed there also.

<blockquote class="twitter-tweet" data-lang="en"><p lang="en" dir="ltr">ICEPatrol is an important public resource for understanding ICE programs and increasing accountability, especially in light of the actions taken by ICE lately, such as the separation of children and parents at the US border.</p>&mdash; WikiLeaks (@wikileaks) <a href="https://twitter.com/wikileaks/status/1009962132824305665?ref_src=twsrc%5Etfw">June 22, 2018</a></blockquote>

WikiLeaks published the database and said, "This information is an important public resource for understanding ICE programs and increasing accountability, especially in light of the extreme actions taken by ICE lately, such as the separation of children and parents at the US border." Increasing anger over immigration policy under the Trump administration has led to coordinated heckling from extreme leftists targeting Department of Homeland Security Secretary Kirstjen Neilsen and White House aide Stephen Miller.

Protests in liberal cities have made it difficult for ICE to function such as in Portland, Oregon where an ICE facility has been forced to shut down by illegal immigrants and extreme left protesters blocking employees access to the building. The left has degraded into a pissing match of who can rant and rail against Trump the loudest. This so-called "outrage" at ICE isn't from the majority but rather from extremists who haven't even considered the real-life logistics of running illegal immigration facilities.

The Left has become so blinded by their rage against Trump that they are willing to demand EXTRA rights, not just the same rights that citizens get but EXTRA rights, for felons and illegal immigrants. Those protesting ICE facilities and separation of families are demanding special rights for illegal immigrants at the expense of those very same immigrants. They want children who are victims of sex trafficking not to be separated from their captors.

When a U.S. citizen, or a legal immigrant for that matter, commits a crime, they are separated from their children, and in the case of the latter, they could face deportation. When an illegal alien breaks the law, Democrats and left extremists want them to get special treatment, that is until their family becomes victimized by violent crime perpetrated by the very illegals they are seeking to hand special rights. Then, when it is their child killed by an illegal immigrant with no license running from police, and they want justice they won't be able to get it because idiots have been campaigning, quite loudly, for giving special rights to illegals that not even our citizens get.

Assange just lost my support. To place law enforcement families at public risk is a crime against democracy! Gitmo for you cobber.

They lost my support as well, doxing law enforcement for just doing their jobs bc of emotions that just all of a sudden popped up is wrong.

I really wonder IF Assange would have a mind to do that or if the JuMedia or the CIA fabricated the story to cast Assange in a bad light in order to cause him to lose supporters.

Why would he do this? Who gains and who looses?

I challenge WikiLeaks to reveal the investigation that caused 9-11. How is that relevant to this report? The investigation was into a few pedophile organizations including the Clinton Foundation involved in controlling US and foreign politicians by supply of children. They love children without documents!

Wikileaks jumps to the darkside. Publishing the names and addresses of ICE agents will result in deaths. We have a right to protect our borders. I thought you were for what is good.