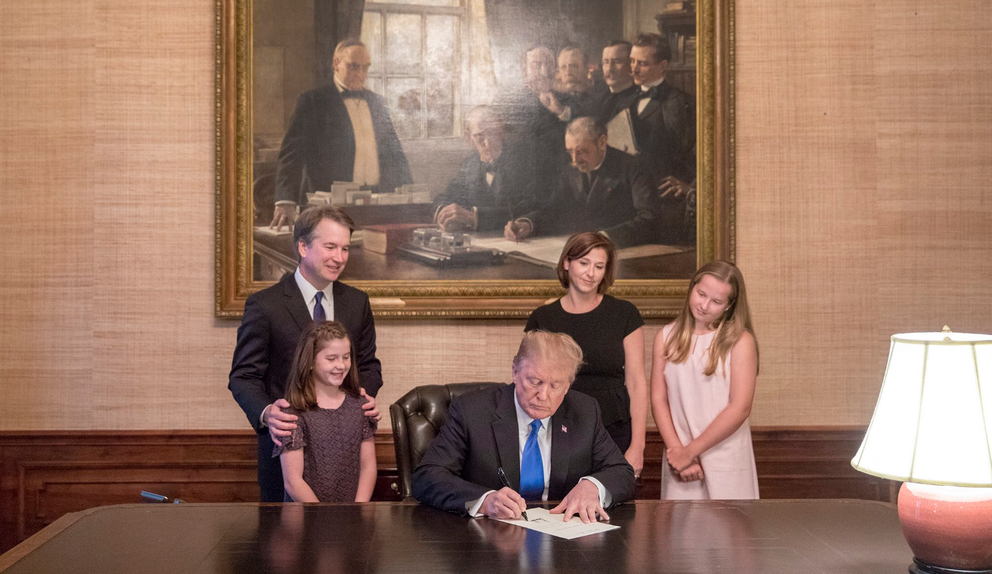 Trump Nominates Kavanaugh For Supreme Court : “One Of The Finest And Sharpest Legal Minds"

US President Donald Trump nominated Mr Brett Kavanaugh, a District of Columbia appeals court judge, for the Supreme Court. Given that it is already Mr Trump's second appointment to the highest court in the US, this could allow him to swing the judiciary to the conservative side for a generation after he leaves office.

During his announcement, Mr Trump praised his 53-year-old nominee as a “brilliant jurist.”

"Judge Kavanaugh has impeccable credentials, unsurpassed qualifications and a proven commitment to equal justice under the law. A graduate of Yale College and Yale Law School. He is a brilliant jurist with a clear and effective writing style, universally regarded as one of the finest and sharpest legal minds of our time."

Mr Trump already launched a first sting towards the Democrats during his nomination, reminding them that his pick “just like Justice Gorsich, he excelled as a clerk for Justice Kennedy.”

POTUS’ nominee will probably get approval from the Republican side, as he worked as a former adviser to ex-President George W Bush. However, given that this decision, and the likely swing to the right of SCOTUS with Mr Kanavaugh on the bench, has far-reaching implications for America on everything from abortion to guns to immigration, it is to be expected that the Democrats will fight him tooth and nail for the nomination to be confirmed.

Mr Kavanaugh wrote some 286 different opinions on various topics, which President Trump praised for their “skill, insight and rigorous adherence to the law” whilst noting that “over a dozen have been adopted by the supreme court as the law of the land”.

Given the ongoing Robert Mueller investigation hanging over the White House, nominee Kavanaugh will probably be asked about a 2009 article which he authored for the Law Review in which he claimed that impeachment was an adequate safeguard “if a president does something dastardly."

“The President’s job is difficult enough as is. And the country loses when the President’s focus is distracted by the burdens of civil litigation or criminal investigation and possible prosecution.”

In response to his nomination, Judge Kavanaugh stated: "Mr President, thank you. Throughout this process I have witnessed firsthand your appreciation for the vital role of the American judiciary. No president has ever consulted more widely, or talked with more people from more backgrounds to seek input abut a Supreme Court nomination. I am grateful to you and I am humbled by your confidence in me."

Yet another IVY Grad sitting on the SCOTUS.

I worry about so many Harvard, Yale, Princeton, Georgetown appointees in our Federal Gov.

It is like the North East Ivy runs the Fed.

But I'll review his rulings and see if he is a US Constitutionalist Bill of Right follower, or Makes it up as he goes like 4 others.