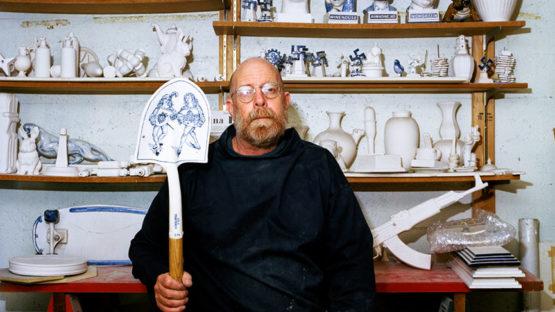 Mr. K And Me: Chasing The Coattails Of Art Outlaw Charles Krafft

I first came to speak with Charles by near accident. I saw that you could “get more information about Spone™” by calling a number listed at the Antiques and Arts A to Z website. Spone™, of course, was Charles Krafft’s innovation upon a theme by Josiah Spode who introduced the world to bone China. Charles made bone China with a twist – the bone furnished in this case came from human cremains.

I suppose I was expecting an answering machine asking me to leave a message with my address where I could get sent some “free literature” just like I had done prior with the Church of the SubGenius, Church of Scientology, late-night televangelists, Lyndon LaRouche or the John Birch Society. In most cases, (JBS with their surprise visit to my house was a notable exception) I’d receive some amount of “literature” in the mail, maybe a bit of email exchange, but that was that.

As a result, I was taken somewhat aback when seconds after dialing the number Charles himself answered, sounding either confused, bemused or slightly irritated to find me “Yeah?” (whoever I was) on the other end of the line. “Who is this?” This same scenario would occur time and again down the line until I’d bugged him enough to make some sort of impression. Not unlike the literal visit from the Bircher who told me (and I have no reason to believe he was lying about that or anything else he told me) who claimed to be a descendant of Samuel Clemens, it was certainly a surprising “human touch” that took me off guard and even shook me somewhat. It would be years later before I did that hour-long interview for the profile in Mjolnir magazine, but once again I was as shaken and humbled as that first time.

In any case, at that particular moment, I was stuck now. I couldn’t bring myself to formulate some line about how I might be making a purchase or commissioning some Spone™ anytime in the near future. I guess I probably made a hell of a first impression stuttering, babbling, maybe both.

It wouldn’t be the first time I would be left slackjawed and stuttering upon inquisition by Charles. It would be a couple years later when I got up the nerve to ask Mr. K for his audience proper, “So I might conduct an interview regarding his life & work.” The interview was to be on spec, of course, as I didn’t have any masthead I was officially attached to at the time. Just like the interviews with Douglas Rushkoff or Dr. Charles Tart which went absolutely nowhere by the way. In this case, however, I would actually eventually make good on the interview, eventually… Years in the distance, sure, but it took that long to get to the point where I knew what this whole correspondence was really about.

Instead of me choosing questions about Charles Krafft, his life, his upbringing, what made him want to be an artist and that usual fodder of artist and author profiles, Charles referred me to a list. Something of a syllabus that, I’ll admit, I’m still working my way through and likely will be for as long as I’m working on anything.

That list was a syllabus, and that syllabus has only grown in the years intervening. The tutelage evolved into an on again, off again correspondence. This correspondence, grew into a mentorship and friendship that I liked to liken to that of Coleridge and Wordsworth, Bach and Buxtehude or, hell, Charles Krafft and Morris Graves or Von Dutch.

This written conversation primarily consisted of emails, but also the occasional package exchange

Now let me explain though, any time I felt admonished or reproved by Mr. K it was, despite being blunt to the point of being flat at times, obvious that I was being chided solely as a corrective means.

His friends generally called him Charlie or Charles. He told me as much early on explaining that it would be fine to use “Mr. Krafft” if I were referring to him in something I’d written, but that there was no need for that degree of formality between us. I still more often than not called him “Mr. K” so that I could salvage some modicum of deference which I found fitting. Mr. K was more than just a mentor and teacher though, after years of emailed correspondence and trading back and forth packages in the mail I felt more and more of an avuncular connection to Mr. K and at times would refer to him as “Unca Charlie.” If he minded it, he didn’t mind it enough to ask me to stop.

“I’d like to write a book about you,” I offered up a handful of times with no direct answer. Seemed any time I brought it up Charles would reply to every point but that one so one day I finally made it clear that at this point he had best explicitly inform me <i>not</i> to undertake such a task. Since then I’ve considered myself unofficially authorized to some extent.

The correspondence and mail exchange was greatly appreciated. In my early 20’s I had somehow managed to con my way into some fairly respected publications. My essay, “Gonzo Lives Underground,” was accepted by the SUNY art journal, Afterimage before I could legally drink. Before I was 25 I had landed in print publications on three continents. From my late teens on I did whatever I could to sidle up to those older, wiser and more accomplished than me hoping for some chance to learn how that Philosopher’s mantle worked, how it was to be worn and where to acquire it. My middle 20’s, however, were something of a mess. I dropped out of college, ended up becoming something of a recluse for the better part of a decade and for a while it seemed like anything I’d managed to accomplish must have been a fluke. Perhaps I’d had a chance at some time, but it seemed to be gone for good now.

Around 2009 to 2010 was when I first became interested in Charles’ work, life and philosophy. Our first informal, epistolary acquaintance corresponded with a period of time when I was working desperately to reinvent myself, or perhaps more apt, rediscover myself. Some traumatic losses and other difficulties were at the crux of a sort of series of existential crises. A long, dark night of the soul that I plumbed amidst creating a sort of alternate art reality. I stuffed personas into pseudonyms and created a maddeningly intricate backstory of how the KunstKrieg KinoPix Studios came to be. It was my literary attempt at Escher’s hands drawing themselves. Then Krafft came along in the midst of all this and his work and attitude resonated deeply within me. Just the fact that he gave me the time of day during a time in which it was still hard for me to even believe in myself was invaluable and life-changing.

After a few years of emails back and forth, I started making payments for Forgiveness fragrance. A cologne inspired by a snippet of dialogue from Peter Mlakar of Neue Slovene Kunst, the Slovenian art collective Charles became involved with during his trip to Eastern Europe in the 90’s regarding bottling a fragrance with the essence “of blood and snow” that should be called Forgiveness. Forgiveness™ was one of the pieces that initially really impressed me. I was fascinated by the transgressive undercurrents and darkly comedic juxtapositions of several works by several artists who gathered under the loose banner of the UnPop Art movement, but this particular piece seemed to possess a sort of gravity and depth that I wasn’t seeing elsewhere.

This is what art is supposed to be, I thought. It was certainly a far cry from soulless, cookie-cutter conceptual art inspired by “art in the age of mechanical reproduction” and the Marxist conception of making sure that the Beaux Arts was just one more assembly line under control of the proletariat. Ironically, Charles’ work was also far more accessible, lighthearted and, frankly, less bourgeois than anything posted up in ArtForum. Charles’ work is evocative and thought-provoking but also fun and aesthetically pleasing. Technical prowess apparently went out of style in the mainstream art vein long before the CIA concocted the “expressionist” movement as a means of maintaining dominance in the cultural Cold War.

Charles is something of an ideologically dangerous, if misunderstood figure. This is something that goes way back, but even after being blacklisted from college engagements, certain scenes from galleries and college gigs to private foundation grants and federal, state and local endowments. Ostracized and ignored by the academy, the mainstream press and the official institutions of art for the crime of breaking step with the Cultural Marxist current.

I’m not claiming he’s a psychic, but during some of our first email exchanges he as much as foreshadowed this asking me to read up on right-wing artists and authors from the 20th century who had careers before the Frankfurt School took hold of higher education. But, not unlike Ezra Pound, Krafft couldn’t leave well enough alone.

<blockquote class="twitter-tweet" data-lang="en"><p lang="en" dir="ltr">it really ruffles my feathers when people use the “it’s just a joke” defense when someone is being a nazi because a lot of actual nazis use that exact same defense, e.g. boyd rice, charles krafft (the hitler teapot guy), or m*ll*on d*llar ext*eme/sam h*de.</p>&mdash; люся, дорогая ☭ (@MissPavIichenko) <a href="https://twitter.com/MissPavIichenko/status/994601259477929986?ref_src=twsrc%5Etfw">May 10, 2018</a></blockquote>

“I sort of have a streak of smart-aleckness that I can’t really help.”

It’s been about a decade since that first phone call and around 7 years since the beginning of our correspondence. I suppose it’s about time to make good on that promise (threat?) of a long-form piece.