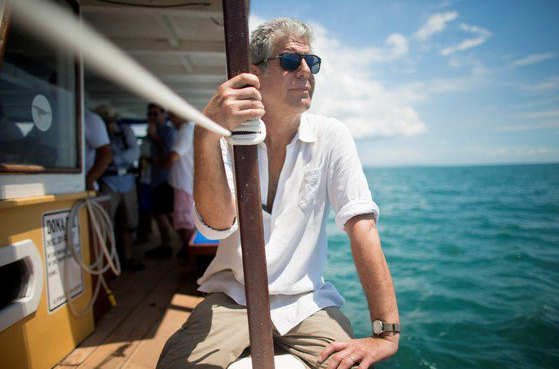 A bombshell interview with celebrity chef Mr Anthony Bourdain who died five weeks ago, was published yesterday. He had given said interview in February already to Ms Maria Bustillos for the magazine Popula she was about to launch. Ms Bustillos published the content of the talks on her website yesterday only and it makes for some very interesting reading indeed.

During the Q&A, Mr Bourdain slammed both Hillary and Bill Clinton and ‘imagined Harvey Weinstein dying alone in a bathtub.’

The death by hanging of Mr Bourdain, a male supporter of the #MeToo movement, was immediately interpreted as suspicious as he had gone on a Twitter rant back in 2017 against Ms Clinton and her ‘goons’ and his girlfriend Ms Asia Argento had given a speech during the Cannes film festival in which she claimed they would be ‘coming for others as well.’

“Bill Clinton, look, the bimbo eruptions—it was fucking monstrous. That would not have flown today. A piece of shit. Entitled, rapey, gropey, grabby, disgusting, and the way that he—and she—destroyed these women and the way that everyone went along, and, and are blind to this! Screamingly apparent hypocrisy and venality. How you can on the one hand howl at the moon about all these other predators. And not at least look back. OK, let’s say, well, it was all consensual: powerful men, starstruck women, okay fine, let’s accept it at its most charitable interpretation. Fine. He is a very charming man, I met him, he’s fucking magnetic.”

After the Weinstein affair erupted, the celebrity chef slammed Hillary Clinton, calling her response “shameful in its deflection and its disingenuousness”.

Asked in further detail as to Ms Clinton’s reaction, he states:

“But I will tell you that as frightening as that was at times, when I sat there with Asia, as she texted her sisters… watching the Clinton apology on Weinstein, and [Asia’s] watching this statement, there was a lot of anticipation. People were really hoping she’d come out with a… I don’t know. Let’s just say with something different. I immediately tweeted my disappointment, very much shaped by what I saw around me. And I will tell you, that was really fucking frightening, the reaction to that. You know, I voted for her.”

“I was really disappointed with the statement. But even by expressing that, the way that my comment was turned, very neatly—suddenly I wasn’t expressing disappointment in her statement; I was blaming her for Harvey Weinstein’s crimes. “

“The way that turned very nicely was a good bit of artistry and deeply frightening to me and really, really…scary.”

Recognizing the importance of his ‘Parts unknown’ series, Mr Bourdain was nominated for several posthumous awards for this year’s Emmy ceremony.

Soon our planet will be safe from archons.

The French blew that murder off, Macron’s fingers smell like Hillary’s taco, oh and all of that hush money.

People don't like to hear the truth. But if you did your research there was a lot of people that came up missing and killed themselves in the Clinton era.

It is not a new thing and never will be a new thing that people in power ( men or women) get away with abuse..killing..and other heinous things that affect others.

The chef wasn't nearly as hard on Hillary as he was on Bill! All too true. But with Hillary he forgot Lesbian, satanist, high satanic witch, into the occult,hypocrite, pedaphile, rapist, mass murderer, devil care bitch, derangednut. Mentally unstable person. Lying, conniving leach.