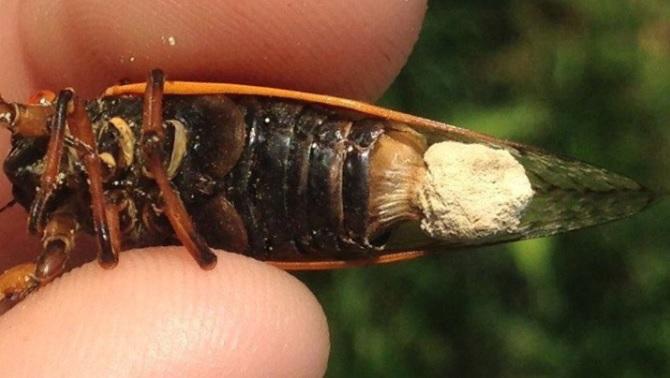 Cicadas are a bizarre insect, to begin with, they spend the first 17 years of their lives underground. But a parasite called Massospora has deadly consequences on cicadas that involves dosing the bug with psilocybin, the hallucinogenic ingredient in psychedelic mushrooms, which in turn makes the cicadas butt fall off. Literally.

This bizarre fate regularly happens to America's cicada populations which spend their youth underground feeding on roots for about 13 to 17 years. When it comes time to emerge, swarms of the bugs synchronously erupt from the ground in something that is only comparable to a biblical plague.

Related coverage: <a href="https://thegoldwater.com/news/32572-What-Separates-the-Queen-From-The-Drones">What Separates the Queen From The Drones</a>

The cicadas emerge from their decades-long youths underground to sing and mate for a few days before dying. However, some cicadas come in contact with the spores of a fungus called Massospora. About a week after encountering the deadly spore, the hard panels of the cicadas' abdomens fall off leaving only a strange white "plug".

That gross "plug" of a stump is the fungus that has grown from the inside out consuming its organs on its way out. The parasite converts the cicada's body into a mass of spores but they don't seem to notice. As the cicadas fly around like usual, their derrieres leave a trail of spores behind them from their backsides. Matt Kasson studies fungi at West Virginia University and said, "We call them flying saltshakers of death."

The name is fitting for the cicadas that once infected become like "high" zombies going around infecting everything else they come in contact with. The butt-munching habits of Massosporas were only just discovered in the 19th century by Kasson and his colleagues. Kasson and his teams' research has discovered the Massospora use mind-altering drugs which is perhaps why "the cicadas walk around as if nothing’s wrong even though a third of their body has fallen off," he says.

Studying these creepy, drug-dosing fungi is no easy task Kasson says. To study them, "you really have to be in the right place at the right time," he says. The opportunity arose in May 2016 for Kasson when he collected 150 of the infected cicadas. The ground-breaking research has changed the way modern science looks at psilocybin, the potent hallucinogen found in magic mushrooms.

"At first, I thought: There’s absolutely no way," a member of Kasson's team said referring to the idea that the parasite produced psilocybin. "It seemed impossible." No one has ever found psilocybin in anything other than mushrooms until this latest discovery of Massospora.