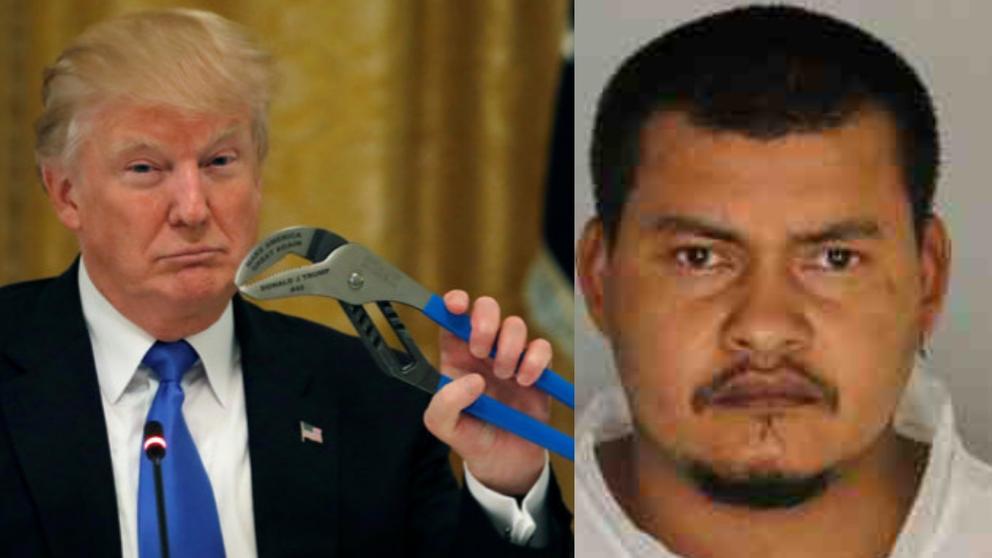 There's more confirmation today that the 45th President of the United States of America is correct in his assessment of the dangers posed by illegal aliens, as previously deported, twice, criminal alien in New York is now in custody on new charges of committing homicide against an elderly American citizen.

According to the Immigration and Customs Enforcement (ICE) agency, 39-year-old Jose F. Olmos, a twice-deported Mexican National present in the United States of America illegally, is responsible for the grisly slaying of 66-year-old Nurten Seljuk on the streets of New Rochelle, New York, where he abandoned the carcass of the woman he brutally bludgeoned to death with his bare hands.

“Jose Olmos-Torres, an illegally present citizen and national of Mexico, was previously removed from the U.S. as an expedited removal on two separate occasions in 2009,” said Rachael Yong Yow, Public Affairs Officer for ICE New York. “At some point thereafter, Olmos-Torres illegally re-entered the U.S. in violation of immigration law for the third time.”

Westchester County District Attorney Anthony A. Scarpino, Jr. announced felony charges against Olmos, saying that the murder happened outside the Main Street National Guard Armory building on July 27th, 2018 between 3:30 and 7:30 AM.

Olmos murdered Nurten Seljuk in the vicinity of 270 Main Street in New Rochelle, a<a href="http://www.westchesterda.net/july-2018/6083-man-arraigned-on-murder-charge-in-death-of-homeless-woman-in-new-rochelle"> statement from the Westchester County District Attorney's Office </a>said, where her body was found in the driveway of the Armory, believed to have been killed by multiple blunt force trauma to the skull and neck.

Jose Olmos appeared in New Rochelle City Court and was charged with Murder in the Second Degree, a class A violent felony, where he will remain in custody until trial, with Assistant District Attorney Nicholas DiCostanzo of the Superior Court Trial Division prosecuting the case.

The Immigration and Customs Enforcement Agency has placed a detainer on Olmos, of which they're asking the Westchester County District Attorney's Office to release the suspect into ICE custody if he were to post a bond or be released for any reason.

Had this been New York City, the Sanctuary policies of the Democratic Party would most-likely ensure that Olmos isn't handed over to ICE, which happens far too often in similar occurrences.

As of now, ICE has been fully notified of Olmos and will track his activity and status to prevent this animal from ever walking free into society.

Earlier this summer, The Goldwater reported a story titled,<a href="https://thegoldwater.com/news/28155-DOJ-Releases-Shocking-2018-Illegal-Alien-Crime-Statistics-and-Media-is-Silent"> “DOJ Releases Shocking 2018 Illegal Alien Crime Statistics and Media is Silent,” </a>which highlights the risks and extreme costs of illegal alien crimes inside of America, <i>for you, the taxpayers,</i> a must-read for anyone who has yet to come to terms with the expenditures you're forced to pay for at the hands of “RINOs” (Republican in name only) like <a href="https://thegoldwater.com/news/32603-Traitor-GOP-Rep-Yoder-R-KS-Pushes-Near-Amnesty-HR392-Amendment-Stealing-American-Jobs"> Kansas Representative Kevin Yoder</a>, and Democratic Party politicians such as <a href="http://www.thegoldwater.com/news/29150-Beware-of-Feinstein-New-Bill-Would-Outlaw-Almost-All-Arrests-of-Illegal-Aliens-in-the-US"> Senator Dianne Feinstein</a>; each of who refuse to take a stand against illegals, and place their interests before that of you and your family.

Olmos should never have been in America in the first place, yet here he is, having entered our country a third time after being deported twice, now charged with murder.

Americans realize that these risks are very real and that Olmos, and many millions of others just like him, need to be deported from America, and President Trump's proposed border wall financed and built to prevent them from ever coming back.

Call your elected officials and demand they do exactly that and protect our country from the scourge of illegal aliens and their crimes against our great civilization.

It's beyond time for Congress to act on what we the people voted for in the 2016 elections, and finance the wall which President Trump seeks $25 billion in funding for, which would forever protect our society from the dangers of illegal aliens.

<span style="margin-top:15px;rgba(42,51,6,0.7);font-size:12px;"><i>Be Sure To Share Our Articles! Social Media Censorship Has Tried To Shut Down Our Ability To Spread Important Truths To America!</i></span>

I hate to say this.

But we need a Clear Federal law that hands down REAL, MANDATORY PUNISHMENT .

Then announce it to the world.

Asylum ONLY if the USA is the 1st and only country border they cross to gain access to. No more 1000 trips across multiple countries to seek asylum.

Either have the Illegal Origin's country accept the felons back prior to prison. Or they Pay for their USA imprisonment and related costs . If that country refuses to do either then reduce US Taxpayer $$$$$$$ being sent to that country by that amount plus the usual 23% to 41% Federal Admin handling fees.

If they end up in prison provide just:

No computer or Cellphones,

If additional offsets are needed to pay for their prisoners.

Put them to work on a 40 hrs prison labor week at min. wage. To off set UN-reimbursed costs.