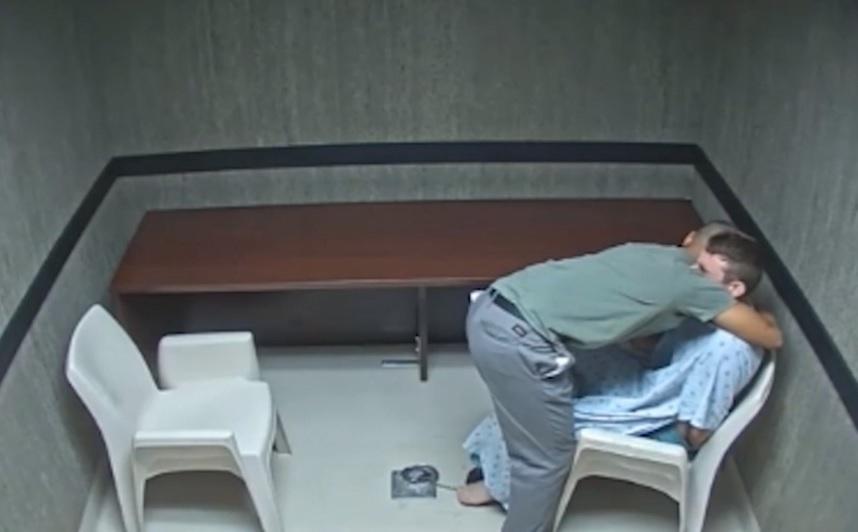 The full video of Parkland High School shooter Nikolas Cruz's interrogation has been released. The video is several hours long but after giving investigators a confession he is allowed to see his brother. A clip from the interrogation footage shows when Cruz's 18-year-old brother Zachary Cruz is allowed to visit him.

Zachary references issues with his brother from the past but Cruz's demeanor clearly changes when his brother enters the room. At one point, the mass murderer even breaks down in tears when his brother tells him that he loves him. "You really messed up this time … no one can get you out of this, dog," Zachary told his brother who is shackled to the floor. A detective remains in the room with the pair because of Cruz's threats to harm himself.

The rest of the interrogation footage shows Cruz speaking with a Broward sheriff's Office detective about a demonic voice inside his head telling him to "burn, kill, destroy." Cruz's brother also mentions Nikolas's obsession with guns and notes that he didn't spend more time with his brother because he liked skateboarding but Nikolas liked guns. Cruz also repeatedly threatened to hurt himself and the first time he is left alone he makes the shape of a gun with his fingers and pretends to shoot himself. He even talks aloud to himself and says, "Kill me".

A father of one of the slain students named Ryan Petty said he read the transcript of the interview but has not viewed the video. After reading the transcript, Petty says it doesn't change his impression of Cruz. "It’s clear to me we’ve got a sick individual that I think, at the time, was coming to grips with what he had just done," Petty said. "I assume that was an investigative technique to see if Cruz would share any information with his brother that he wouldn’t share with the detective."

During their brief 15 minute video, Zachary asks his older brother, "What do you think mom would think right now if she was …?" Both brothers agree, "She would cry." Zachary also tells his brother what people think of him saying "People think you’re a monster now."

"A monster?" Cruz asked. "You don’t have anything and you’re not acting like yourself. Like, why? … This is not who you are. … Why did you do this? … Don’t even laugh at me," Zachary said. "I’m sorry, dude," Cruz replies. During middle school, Nikolas Cruz slept with scissors and knives because he was afraid of his brother. Nikolas Cruz was bullied by his brother who called him names for much of his life.

"I told you when we were walking down the hallway that it’s just me and you and I had your back," Zachary said. "You probably felt like you had nobody but I, I care about you. I literally would pull my heart out for you." Even though his older brother had just killed 17 people, he assured him that he loves him says he was only mean to him because he "didn't want to look weak".

"I told you when we were walking down the hallway that it’s just me and you and I had your back," Zachary said. "You probably felt like you had nobody but I, I care about you. I literally would pull my heart out for you."

Too bad you could not be bothered to go shooting or spend time with him otherwise. Grats

Clear a violent mental case that slipped thru the cracks (canyon) of touchy-feely red tape.

How many restraining orders did the school and others have on him?

Fore those Liberals still complaining and whining about the realistic efforts to Secure Our Schools (SOS).

This is the results of Gun Free Zones and other feel good solutions.

Words do not stop bullets.