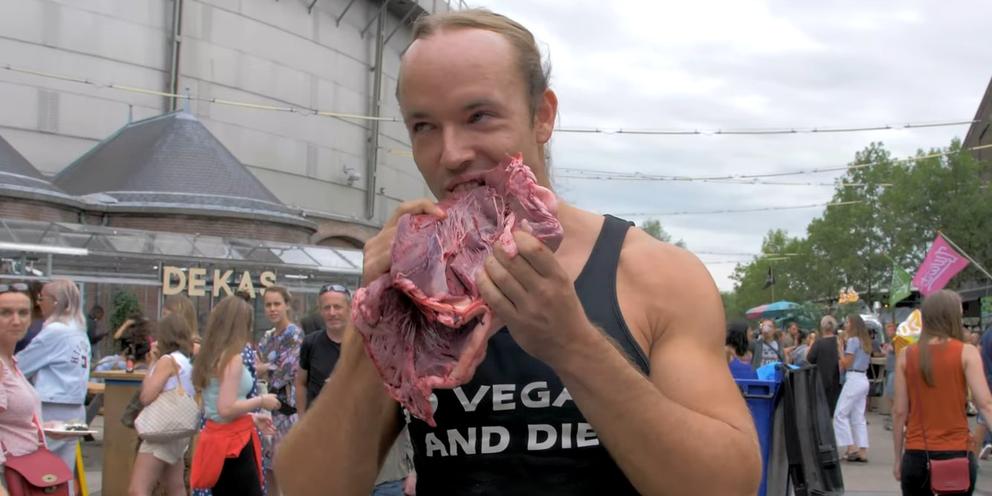 A man in Amsterdam might have given some liberal vegans a dose of their own medicine when he staged his own odd protest in their food festival. He ate raw meat in an obviously vegan event.

The man was even filmed chewing on the meat. Witnesses said the meat was “literally dripping” with blood as it was being eaten by the man. The man was also seen wearing a black vest top with the slogan that read: “Go vegan and die.”

A spokesperson for the Vegan Food Festival has expressed their disapproval over the man’s actions. This time it is the vegans who felt “offended” by a protest. The spokesperson stressed that the festival was a “family event.”

In the video, a woman was even heard saying, “he is just eating it!” It was captured on a smartphone.

The man did not reveal his name and was initially reluctant to leave the event, standing his ground that there was no rule stating that he cannot stay in the vicinity of the festival.

<a href="https://thegoldwater.com/news/29861-France-Butchers-Demand-Protection-Against-Terror-Vegan-Militants">France Butchers Demand Protection Against Terror Vegan Militants </a>

The meat-eating man eventually relented. The police said it is for the peaceful conclusion that no charges were made against the man, and he was allowed to just go.

The organizers for their part stressed: “While it is of course not forbidden to eat raw meat, it was, of course, a shocking sight because there was a puddle of blood and fat. Besides, there were lots of elderly people and children. At that time a special children’s programme was going on.”

<a href="https://thegoldwater.com/news/21816-Toronto-Chef-Taunts-Protesting-Vegans-By-Butchering-a-Deer-In-Front-of-Them"> Toronto Chef Taunts Protesting Vegans By Butchering a Deer In Front of Them </a>

Non-vegans are becoming more aggressive, it seems, in fighting back the protests of vegans. Just last week, Last week, a butcher was recorded aggressively swinging raw meat at vegan protesters who were carrying out a “silent protest” in front of his market stall.

<a href="https://thegoldwater.com/news/28291-Google-Removed-The-Egg-From-Salad-Emoji-To-Be-Vegan-Friendly-And-The-Twitter-Responses-Are-Hilarious#28417"> Google Removed The Egg From Salad Emoji To Be Vegan Friendly And The Twitter Responses Are Hilarious </a>

It looks semi-boiled to me, given the way the fat looks

I think that he should have eaten a tasty looking beef sandwich instead.

It would have looked better.

I’m so sick of all this vegan soy boy crap.

Rather see him eat a vegan