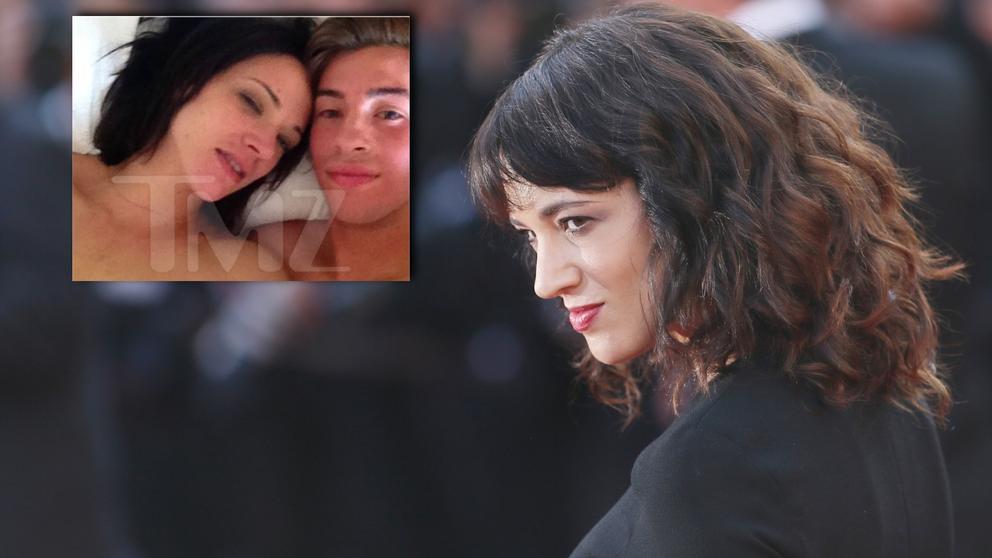 The last few days have been a whirlwind of revelations regarding #MeToo figurehead Asia Argento. Accusations were made Sunday that Argento had raped 17-year-old child actor and musician Jimmy Bennett in 2013 and his lawyer had sent a letter of intent to sue. Argento settled out of court and paid Bennett $380,000 to stay silent. Then on Tuesday, TMZ reported that they had seen a photo that was a selfie taken by one of the two in bed shirtless during a sexual encounter. Well, now that photo has been released.

Asia Argento could now be facing criminal charges that could not only see her registered as a sex offender but it would put a stain on the #MeToo movement and call into question the validity of her claims that Harvey Weinstein raped her. She may have to testify against Weinstein in a jail jumpsuit. Argento had just released a statement Tuesday denying that she had sex with Bennett and blaming the nearly half a million dollar payout on her dead ex-boyfriend, Anthony Bourdain.

"I have never had any sexual relationship with Bennett," Argento said. At this point, it would have been better if she had just not said anything about the Bennett situation. But along with the damning photo, more information was released including a screenshot of text messages between Argento and one of her friends where she admits to having sex with him but claims she didn't know he was a minor. We know that is not true because a third-part chaperon accompanying Bennett was allegedly dismissed by Argento before they went to the hotel room, got drunk, and had sex.

Related coverage: <a href="https://thegoldwater.com/news/34673-MeToo-Leader-Asia-Argento-Blames-Anthony-Bourdain-for-Having-to-Pay-off-Boy-She-Molested">#MeToo Leader Asia Argento Blames Anthony Bourdain for Having to Pay off Boy She Molested</a>

She also admitted to her friend in the text messages that there is another photo where you can see her "tits" and "he is standing up". She also texted her friend a screenshot of a note written on a napkin that reads, "Asia, I love you with all my heart. So glad we met again and I'm so glad you're in my life, Jimmy." Argento also writes in a text accompanying the image of the napkin, "He wrote me this afterward and kept sending me unsolicited nudes all these years up until 2 weeks before the attorney's letter. It wasn't raped but I was frozen. He was on top of me. After, he told me I had been his sexual fantasy since was 12." The L.A. County Sheriff's Dept. is reaching out to Bennett to determine if a criminal investigation is warranted.