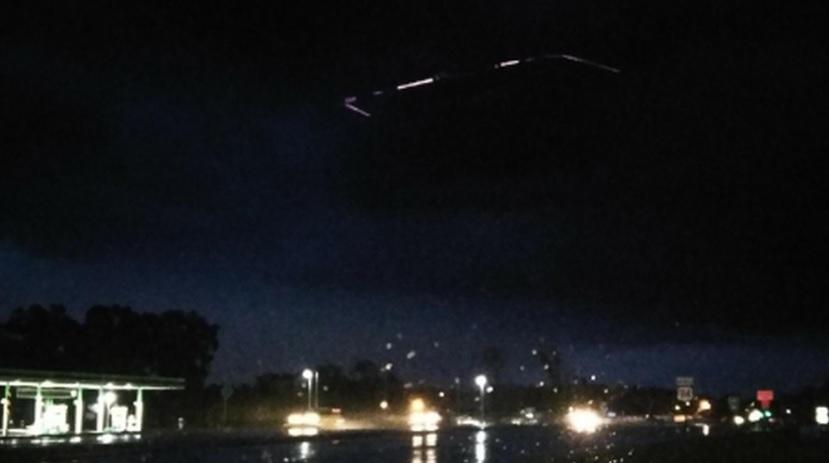 A spectacular UFO sighting took place near Charlotte, North Carolina and a photo of the craft was posted on Facebook by a witness. The picture was taken by a husband and father who admits he doesn't believe in UFO's, but he can't explain the sighting.

35-year-old Javion Hill lives in Kings Mountain, North Carolina and spotted the craft during a storm on August 18 while driving on U.S. 74.

The spectacular image shows the outline of a brightly lit square object hovering in the sky. Hill said he was frightened by the craft to the point that he didn't get any sleep that night. "I was on my way home with my wife on the speakerphone, and it looked like there was a tornado coming, so I was trying to take a picture of the clouds for my wife," Hill explained.

"But then I saw something that wasn’t normal and I was, like: ‘Oh my god, what is that?’ I started trying to take as many pictures of it as possible while I was driving." Hill even pulled over at the next exit to try and take a video of the UFO but by the time he pulled over it had started pouring rain.

Related coverage: <a href="https://thegoldwater.com/news/33778-UFO-Hunter-Who-Died-Under-Mysterious-Circumstances-Had-Laptop-Wiped#33837">UFO Hunter Who Died Under Mysterious Circumstances Had Laptop "Wiped"</a>

North Carolina is one of the top 10 states for UFO sightings and has had around 7,570 sightings since 1940 leading to a plethora of conspiracy theories such as secret military experiments. Hill says the UFO he spotted was possible a military spacecraft known as a TR-3B, a top-secret anti-gravity craft capable extraordinary maneuvers.

Hill added, "I was worried for my safety, I didn’t believe in UFOs until that moment."

He doesn't believe in UFO? What a square.

Looks more like a the reflection of cell phone laying on the dash to me.

I think the USAF has enough brains to test special stuff in remote locations.

NOT over a city of Millions.

Want to cause a UFO sighting?

Use your mind a little and connect them together.

Turn on the LED's and release the collection on a clear night near a city.

Grab a camera video your event.

Sit back and enjoy the fame.