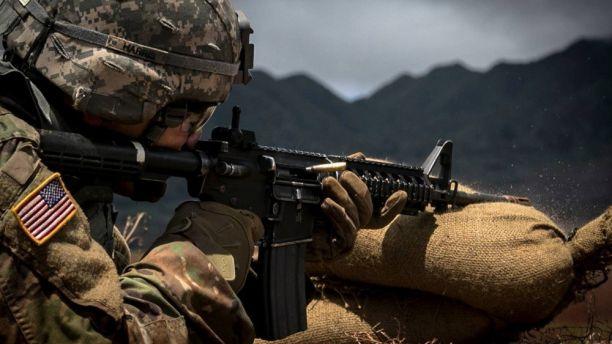 The United States special forces are already an iconic presence on any battlefield and stand out due to their cutting-edge weapons, communications, and low profile helmets. With special forces operating in dozens of countries, one country, in particular, has some of the toughest battlegrounds: Syria. For many months U.S. officials denied that American soldiers had boots on the ground in Syria. The narrative was soon revised by Pentagon Spokesperson Peter Cook who admitted that boots were, in fact, on the ground but insisted they were not doing the fighting.

"They are not on the forward line," Cook said. "They are providing advice assistance, and again, I'm not going to get into details but that mission has not changed, their role has not changed, they are not leading this fight, they are supporting those forces that are at the leading edge." This statement follows numerous sightings dating back to 2016 where what appeared to be U.S. special forces were sighted by war journalists on the front lines fighting ISIS in Syria.

Related coverage: <a href="https://thegoldwater.com/news/25735-Syrian-President-Assad-The-Agenda-Of-The-Deep-State-In-The-US-Is-To-Create-A-Conflict-Video">Syrian President Assad: “The Agenda Of The Deep State In The US Is To Create A Conflict” (Video)</a>

Now that it is officially acknowledged by the government that U.S. soldiers are fighting ISIS in Syria, some of them on the front lines, let's take a look at a recent weapons upgrade that U.S. Special Operations soldiers received. America's most elite warriors are now even deadlier thanks to about $48 million worth of new, cutting-edge suppressors. The new weapon upgrade chosen by Special Operations Command is the Sig Sauer MCX SURG System.

The Sig Sauer MCX SURG System is a new suppressor that will provide improved accuracy, speed and reliability on the battlefield. The new suppressors will deliver outstanding sound reduction due to the ultra-advanced materials they are made from. Sig Sauer has taken a revolutionary approach to weapons suppressors and the result is a distinctive looking piece of marvelous engineering. The MCX SURG System will fit the M4A1 carbines and makes America's deadliest warriors even more silent. Here is a photo of the actual MCX SURG System:

<i>"NEWINGTON, N.H., (August 7, 2018) – U.S. Department of Defense (DoD) has announced the selection of the SIG SAUER MCX System for the Suppressed Upper Receiver Group (SURG) for the existing M4A1 Carbine. The SIG SAUER MCX SURG System will be an upgrade to the current M4A1 Carbine – a fully automatic version of the M4 Carbine – that went into service in 1994."</i>

<i>"The DoD began the SURG program to upgrade, and optimize military weapons for continuous, suppressed use on the battlefield. The SIG SAUER MCX Rifle System outperformed the competition through the demanding, rigorous, and grueling testing to receive the SURG award. The SIG SAUER suppressor withstood the stringent stress and torture requirements set by DoD for firing specifications, vibration, sound, and temperature requirements to ensure soldier safety."</i>

<i>"The requirements set by DOD for the SURG procurement demanded significant improvements in reliability, thermal characteristics, and durability that went well above anything we are currently seeing in the industry,” said Ron Cohen, President, and CEO of SIG SAUER, Inc. “We worked very hard to develop the MCX SURG System to specifically meet and exceed the DoD requirements. I am extremely proud that our hard work paid off, and endured the stringent and demanding military testing requirements, to ultimately gain the confidence of DoD to support their operations in the field."</i>

<i>"This DoD Award for the MCX SURG System is a $48 million, five-year, indefinite-delivery/indefinite quantity, firm-fixed-price contract with an expected completion date of July 2023. The system will be built at the state-of-the-art SIG SAUER worldwide headquarters in Newington, New Hampshire."</i>

U.S. Special Operations Forces tend to use the M4A1 which is a fully automatic version of its semi-automatic predecessor the M4. The M4A1 is made by FN and weighs about 6.36 pounds with a 14.5-inch long barrel and an overall length ranging from 29.75 inches to 33 inches. This weapon uses 5.56x45mm (.223) NATO cartridges that is magazine fed with a maximum mag capacity of 30 rounds. The M4A1 offers a trio of trigger group settings which are safe, semi-automatic, and fully automatic with a trigger pull of 5.5 to 9.5 pounds. The lean, mean shooting machine is capable of a 700-900 round per minute rate of fire.

You may be wondering what the big deal is about the new SIG SAUER MCX suppressor system? Well, the real benefit will be for the Special Operations Forces who operate under stealth often in the cover of darkness with a goal of getting in and out very quickly while making as little noise or disturbance as possible. This is because often times special forces operations take place behind enemy lines. Thanks to the new upgrade, special forces operators will make even less noise and have reduced muzzle flash making it less likely to give away their position.

Sig Sauer revealed a variant of the MCX that is being provided to the military at a SHOT show earlier this year. You can see more about the consumer version of this upgrade in the video above. Sig Sauer put the new suppressor through rigorous testing that simulated hardcore environments. The company reported the testing was rigorous, comprehensive and exhaustive, according to Fox News.

The MCX SURG also had a high standard to meet for effective sound reduction without compromising weapon effectiveness in combat or lethality, not an easy task. Thanks to advanced materials, the MCX SURG was able to withstand extremely demanding standards for temperature and vibration. This strenuous testing helps ensure the weapons effectiveness on the battlefield and the safety of its users. While we may not be able to get our hands on the military version of the MCX SURG, it is nice to know that our country's finest warriors have the latest and greatest weapons technology at their disposal.