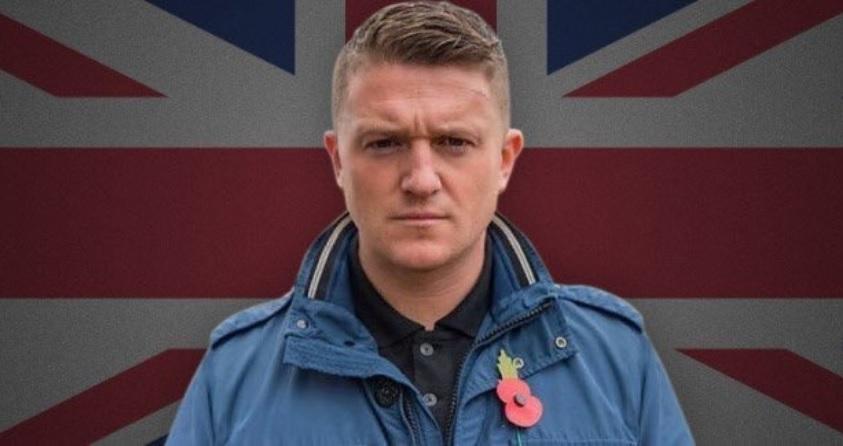 The UK political activist known by the pseudonym Tommy Robinson is back in the crosshairs of the British government, or perhaps he never left? Robinson took to his YouTube channel to provide an update to his trial which is set to take place on September 27. "Can you believe that?" Robinson asked his viewers. "I am being taken to the highest court in this land, the highest most senior court, a court that's used to hearing terrorism charges, some of the most high-profile murders in Britain, and now it's going to face the trial of Tommy Robinson who spoke through his iPhone and got people information that was already in the public domain."

Robinson goes on to explain, "Originally I was sent to prison for breaching a section for reporting restriction." In case you haven't been following Robinson's story, he was sent to jail for streaming a Facebook Live video outside a courthouse where Muslim defendants were facing charges. He goes on to explain, "Now, the section for -and this is, this is the, I know I haven't done live streams for a little while, I've been trying to sort some stuff out, I've had so much going on and I've just been waiting for this court date, to be honest."

He continues, "It's like I can't really get on with my life because I expect to go back to prison next Thursday." Robinson was previously sent to prison for three months over the filming of the Muslim Defendants during the Facebook Live stream. While in prison, staff placed Robinson in a majority Muslim wing of the prison and he was instantly recognized and threatened. You can actually view a video of the altercation and subsequent interview with prison officials which I'll provide below.

Back to Tommy's latest update, he goes on to say, "I haven't really been able to make plans. I'm doing this now just as a live stream instead of making a video I'm putting out -Kailyn and George no longer work with me at the minute so I'm just doing a quick live update so I can keep people informed because I was originally sent to prison for breaching a section for reporting restriction order. That's what they took me to court for, that's what they tried me for, and in a kangaroo court sent me to prison."

"Now, they're adding two extra charges," Robinson continued. "So when I go before the Old Bailey I'm not just up on that one order. They've widened that order so all the Pete, I know a lot of comments I keep seeing people saying 'this is going to get thrown out and it should get thrown out but they're gonna, then they're not, they're going all guns blazing. They're trying to I've just been told tonight two years in prison."

If you are wondering why Robinson is being tried in the nation's highest court as if he is some kind of terrorist over a simple Facebook Live video, so is the rest of the world. It all started on May 25, 2018, when Robinson was live streaming on Facebook outside of a court hearing for a verdict of Islamic grooming gangs. The mere fact that he was reporting on the grooming gangs was enough for the Orwellian police to arrest him. You can view the live stream that got Tommy Arrested below.

The British government has made it clear that reporting on the horrific grooming gangs that are predominantly composed of Muslims is not allowed. The government even went after one of its own, elected Labour Party politician Sarah Champion for exposing the rape of thousands of white girls at the hands of predominantly Pakistani migrants and the subsequent cover-up by police and government officials over the last several years. Champion was ostracized by her party, publicly harassed and threatened, and still has a target on her back for drawing attention to the thousands of rapes at the hands of migrant grooming gangs. If you are interested in learning more about that disgraceful situation, I've included a short overview of Sarah Champion in the video below.

Tommy Robinson is just a guy with a YouTube channel who grew up in a multicultural part of Britain where people of all ethnicities got along for the most part, but now Robinson has observed a narrative that Europeans are racist for pointing out the growing problem of grooming gangs and groups of Muslim men who roam unchecked in no-go zones gang-raping women at will. When Robinson attempted to expose the cover-up of the grooming gangs by reporting from outside of the courthouse where several Muslim defendants were being sentenced, he was immediately sequestered into a police van and sent to straight to prison.

He would eventually be released after winning an appeal but the government has since brought new charges against him and according to Robinson's latest video update on YouTube, he could be facing several years in prison all for reporting on Muslim grooming gangs.

Trump should just offer him automatic US citizenship to be free at will.

Europe is such a joke.

ITS SO SICKENING AND DUSGUSTING. VERY DISTURBING WATCHING ALL THESE VILE INHUMAN BEHAVIORS AND THE LAWLESS INJUSTICE. THE WORLD IS FULL OF CRAZY LUNATICS. MAY GOD BLESS AND KEEP TOMMY AND HIS FAMILY. GOD BLESS THE UK AND MAY GOD PUNISH AND DESTROY EVERY EVIL SOUL WALKING ON THE FACE OF THE PLANET.

Looks like bloodshed is the only way out now.