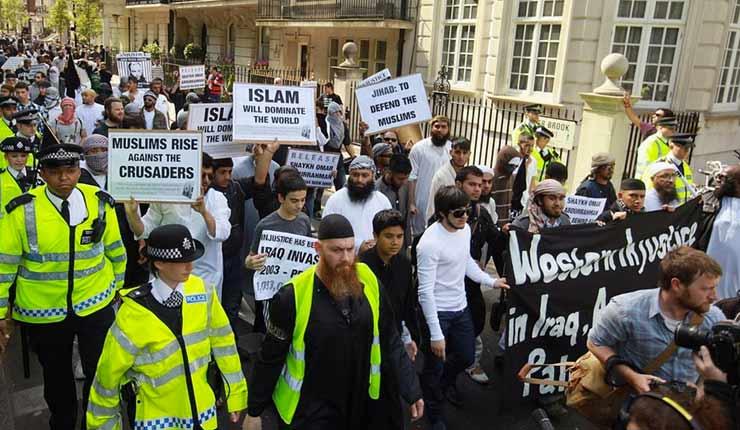 Politicians in the UK have allowed a problem to escalate due to their fear of confronting the issue of Islam. In a video uploaded by Sargon of Akkad on YouTube, a European politician asks why there have been literally millions of rapes by Islamic rape gangs against white European women yet only 220 have been convicted for rape since 2005.

The massive discrepancy in the numbers is indicative of the fear of law enforcement and political leaders to confront the Islamic leaders about rape gangs ravaging the women of the UK with near impunity. The politician in the video calls for the government to ask the Muslim leaders whether the behavior of the perpetrators is sanctioned in the Koran and if it is to issue a fatwa against it.

Secondly, the politician calls for the government to encourage a national debate about the various interpretations of Islam. He concludes his statement by saying, "Can we talk about Islam without being accused of a hate crime?" The current situation is the culmination of stagnation in the European government's response to the growing epidemic of Islamic rape gangs and the illegal Shariah courts that sanction them.

Last year, the London police were accused of covering up a violent campaign to turn London into an "Islamic Area". Victims of the rape gangs have accused officers in the borough of Tower Hamlets of ignoring and downplaying the outbreak of hate crime and suppressed evidence that would implicate Muslims for fear of being accused of Islamophobia.

There are even portions of some countries such as Germany where police have dubbed "no-go zones" because the threat to officer safety is too great to enter those areas. Recently, German immigration authorities attempted to deport a man but when they tried loading him into their cruiser they were quickly surrounded by a mob of 200 angry immigrants who forcefully freed the man from German authorities' custody.

Related coverage: <a href="https://thegoldwater.com/news/27387-UK-Woman-Arrested-for-Asking-Why-Muslims-Are-Being-Allowed-to-Break-the-Law#27397">UK- Woman Arrested for Asking Why Muslims Are Being Allowed to Break the Law</a>

In East London, a group of hooded Islamic vigilantes calling themselves the "Muslim patrols" have been patrolling the streets and enforcing Shariah Law on passers-by demanding they behave in an Islamic way. There has also been an explosion in the number of Shariah Courts in London that operate under their own laws complete with hearings, sentencing, and punishments. Having a court system other than the country's sanctioned government courts is illegal yet they are allowed to persist.