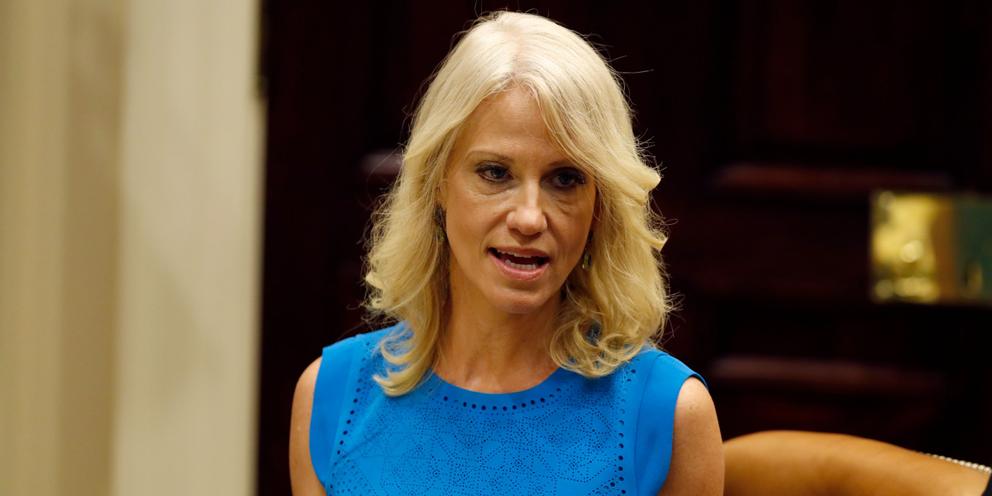 Kellyanne Conway Reveals She Is A Victim Of Sexual Assault

White House correspondent and former manager of Donald Trump's election campaign Kellyanne Conway revealed in an interview Sunday that she is a victim of sexual assault. "I am a victim of sexual assault," Conway told CNN but she did not elaborate any further. It seems the 51-year-old isn't seeking to publicly name an accusation but hinted she was molested by Congressmen.

Conway made the remark when she was defending President Trump's Supreme Court nominee Brett Kavanaugh. The reality is that all accusations can't be true, to suggest that there has never been a woman who lied for whatever reason is disingenuous. So that means, it comes down to an impartial investigation and an objective look at the preponderance of the evidence. The accuser must be looked it with a great deal of scrutiny, and her credibility measured just like the accused.

"I feel very empathetic… towards victims of sexual assault," Conway said. The Senate vote on whether to confirm Kavanaugh's Supreme Court nomination was delayed dramatically by the accusations and the even the President decided to order the FBI to conduct further background checks on Kavanaugh just to put the matter to bed one way or another.

Millions watched federal judge Brett Kavanaugh's confirmation hearing in the US and around the globe as Christine Blasey Ford accused the judge of sexually assaulting her as teenagers in the 1980's. Ford never went to the police, admits that she was frequently drinking at parts where older men and alcohol were present, and doesn't even remember the date of the assault or who she arrived or left with on the night it occurred.

The longer that Ford was questioned, the more her story unraveled and she was caught in many inconsistencies. The farce was enough to essentially force the president to intervene and order for a second look by the FBI but with a limited scope. President Trump allowed the FBI to interview two of Kavanaugh's three accusers with the third being a hearsay witness and not present during any of the alleged events.

The mere fact that Ford was willing to fly to the hearing on national television and was surrounded by attorneys who were supposedly working for "free" or pro bono as they called it shows that she has a great interest in taking down Kavanaugh. Now, all these years later, Ford is a far-left university Democrat with hatred for Republicans and all things Trump.

Related coverage: <a href="http://thegoldwater.com/news/38356-Kavanaugh-How-Long-Can-This-Circus-Last">Kavanaugh – How Long Can This Circus Last?</a>

The FBI will be interviewing not just Ford but Deborah Ramirez as well who also alleges sexual misconduct by Kavanaugh. During his hearing, Kavanaugh didn't act guilty and acted like a man who was innocent and was being thrown to the wolves by a court of public opinion. When Conway revealed her own sexual assault while defending Kavanaugh, it was not the first time she spoke of it.

Conway also brought up her sexual assault in 2016 while managing Trump's election campaign. She passionately defended the future president against the allegations against him. "I would talk to some of the members of Congress out there," Conway said. "When I was younger and prettier, them rubbing up against girls, sticking their tongues down women's throats, uninvited, who didn't like it."

In a 2017 #MeToo moment, Conway described her assault but said that "nobody cared" about it because of her political views. Now, Conway said during an interview with CNN's Jake Tapper on his "State of the Union" news show, "I feel very empathetic, frankly, towards victims of sexual assault and sexual harassment and rape."

<blockquote class="twitter-tweet" data-conversation="none" data-lang="en"><p lang="en" dir="ltr">CNN’s Jake Tapper: “As a survivor of this … does that not make you think, when you hear somebody like Professor Ford … does that not make you think these women need to be heard?”<br><br>Kellyanne Conway: “They should all be heard. And they should be heard in courts of law” <a href="https://twitter.com/hashtag/CNNSOTU?src=hash&amp;ref_src=twsrc%5Etfw">#CNNSOTU</a> <a href="https://t.co/zR5cze8TQd">pic.twitter.com/zR5cze8TQd</a></p>&mdash; CNN Politics (@CNNPolitics) <a href="https://twitter.com/CNNPolitics/status/1046390825079451654?ref_src=twsrc%5Etfw">September 30, 2018</a></blockquote>

"I'm a victim of sexual assault. I don't expect Judge Kavanaugh, or Jake Tapper, or Jeff Flake, or anybody, to be held responsible for that. You have to be responsible for your conduct. We do treat people differently who are either the victims or the perpetrators of this based on their politics now, based on their gender. That is a huge mistake."