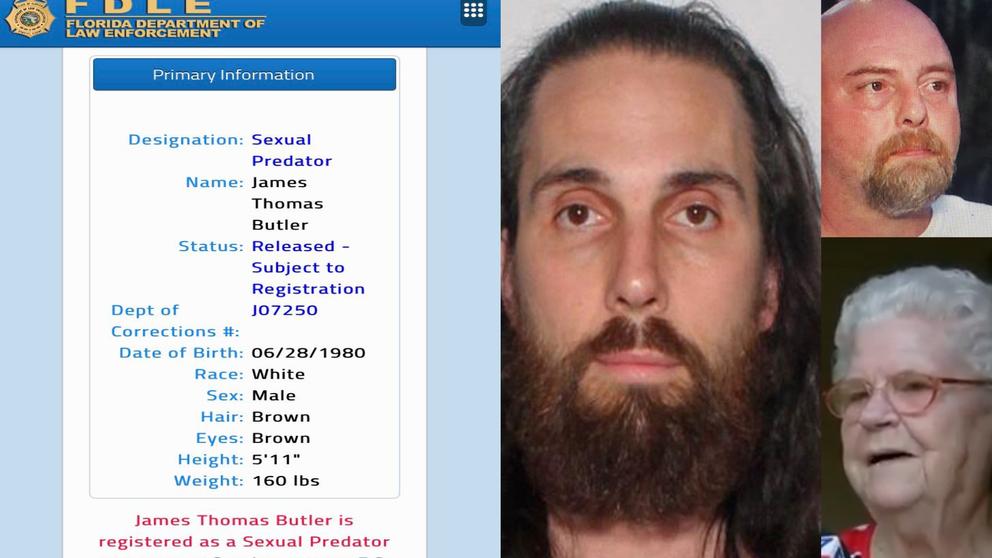 According to arrest documents, the suspected ringleader is 38-year-old James Thomas Butler.

<span style="margin-top:15px;rgba(42,51,6,0.7);font-size:12px;">Suspected ringleader of a Floridian child pornography circuit and formerly convicted child rapist James Butler arrested at his Jacksonville-area home. The home had six other convicted sex offenders inside, which the FBI believes is connected to the recent shutdown in a network of distributors. The patriotic war on pedophiles, and child pornography continues to rage under President Trump's Administration’s, “Make America Safe Again” agenda.

Butler is well-known to police, and his involvement in a widespread child pornographic distribution network isn't surprising.

To add insult to injury, Butler is a pedophile who was released from prison in 2016, after having previous convictions for production of child pornography and attempted child rape.

Butler served 11-years in a federal penitentiary for an attempted sexual battery of a minor, after the pedophile preyed on a young child.

Butler had already been convicted in 2001 of attempted sexual battery and lascivious molestation of a child younger than 12 in Jacksonville, the U.S. Attorney’s Office said.

After being released, Butler had little intent to give up his perverse nature, FBI Special Agents say, and this time he employed six other skilled pedophiles he met in prison to assist in his efforts.

Once Butler was released from prison, he and six other convicted child sexual predators had mapped out a “get rich quick” scheme online, where they planned to distribute child pornography.

The underworld of child pornographic distribution is a highly profitable illegal enterprise, where global perverts will pay limitless cash to witness the rape and sexual abuse of innocent children.

Authorities would learn of the operations of Butler after Miami-Dade investigators shut down another child pornographic distribution ring,<a href="https://thegoldwater.com/news/33274-Homeland-Security-Busts-Major-Miami-Dade-Child-Porn-Ring-100-000-Videos-and-Images"> as The Goldwater reported in August</a>.

The FBI says that back in May, they executed a search warrant at a Northside home on Old King's Road South, where Butler and the six unnamed pedophiles were residing.

As part of that operation, they would arrest Butler for violating his probation by accessing child pornography websites on his cell phone.

While interviewing the pedophiles, Special Agents had seized two smartphones from Butler.

After a forensic review of the smartphones, Special Agents discovered pornographic videos of a child on one that appeared to have been secretly filmed with a hidden camera, court documents say.

Upon his release, Butler moved to an Apache Avenue home in the Ortega Neighborhood of Jacksonville, to be given safe haven by his mother.

Further investigation of Butler and the evidence found during the first raid would uncover the child’s identity just last week.

As it turns out, the child victim was sexually assaulted by Butler inside of a Jacksonville residence, and authorities quickly issued an arrest warrant for James Butler.

The Jacksonville Sheriff’s Office, the Federal Bureau of Investigation, and the Duval County School Police Department assisted in setting a perimeter around the neighborhood prior to the raid.

That's when undercover Sheriff's Deputies, Police Officers, and Special Agents went door to door around the home passing out information to neighbors about their target, warning them to stay inside while the operation was underway.

As Special Agents then began their search to find Butler, more unmarked vehicles were spotted surrounding his Mother's home on Tuesday, stunning neighbors.

A skillful execution of the search warrant occurred, according to the brother of the ringleader, Jerry Butler, who was caught off guard when the situation escalated.

“When I woke up this morning, the door was kicked in and the lock was destroyed,” the suspect’s brother, Jerry Butler, said.

Butler claims he and his mother were inside the home when the front door was kicked in, with splintering wood flying across the entranceway.

According to the brother of the child rapist and child pornographer, he and his family were somehow victimized for their desire to protect a child rapist wanted by police.

When speaking to local news, Jerry Butler was asked how many FBI Agents came inside the home.

“At least a dozen. I saw three,” Jerry Butler said. “When I woke up this morning, the door was kicked in, the lock was destroyed.”

“I had three people with rifles pointed at me, the safety was off,” Jerry Butler claimed. “They had their fingers on the trigger telling me not to move but to put my hands up in the air.”

Neighbors watched from a distance as the raid unfolded, bringing a dangerous criminal to justice, where he will await trial.

“The entire time they kept saying, we are here to protect the children,” Butler said.

We can say that Butler is correct, as his brother was a threat to every child on the face of the earth. Those who hurt children must be eradicated from society before he violates another child victim.

Butler said his mother’s home was “ransacked,” which wouldn't have been the case had they not been harboring a wanted fugitive child sexual predator.

“Dead asleep, taken into custody immediately, sat down in the front yard,” Jerry Butler said of his brother's arrest at their home.

James Butler is accused of producing and attempting to produce child pornography and is now in the custody of federal agents.

“All the police cars were up and down the road,” said neighbor Lorine Higginbotham, who lives near the home investigators said Butler once shared with six other sex offenders.

<span style="margin-top:15px;rgba(42,51,6,0.7);font-size:12px;">Lorine Higginbotham, neighbor and grandmother. She's concerned about the perceived inactivity of law enforcement in the area surrounding the home where pedophilia was rampant and used for profit.</span>

Higginbotham said she has personally called the police for years about the Old King's Road home where Butler and the other convicted child sexual predators had planned their operations.

Not only did the local police fail to act, but as a result, she was afraid to have her grandchildren visit.

“Every time they come to visit I have to keep them in the house, I can’t let them out in the yard,” Higginbotham said.

For Higginbotham, and all of the locals in the community with children or grandchildren, they now have one less dangerous criminal to worry about.

Special Agents said that inside the home, Butler had at least one computer with child pornographic content on it, as well as sexually explicit pictures and videos on his phone.

The illicit materials found on his phone depicts a young toddler-aged female child and were taken from a hidden camera inside of her room.

Now, James Butler is accused of producing and attempting to produce child pornography, on top of his possible probation and parole violations for previous convictions of attempted child rape in similar crimes.

Pending Arraignments, Butler is being held without bond and has a detention hearing scheduled for next week.

Butler faces an enhanced mandatory minimum penalty of 25 years and could be sentenced to up to 50 years in federal prison and a potential lifetime of supervision.

<i>The scourge of child pornographic distribution continues to be eliminated under the Trump Administration, which has result in over 11,000 arrests related to human and child-sex trafficking, child molestation, or child pornography since President Trump's inauguration in January of 2017, setting records in the widespread victories against the rampant pedophilia in America.</i>

The sheer brilliance of the law enforcement agencies involved in this arrest deserves applause, and we thank them for once again removing a threat to the nation's children from society.

<h4>If you or anyone you know has additional information about this case or similar cases please contact us without hesitation and The Goldwater will gladly provide you with the latest coverage.</h4>

People like this repeat child predator should be warehoused for life to keep them away from developing human beings. In addition, seeing as they will never change execution should be considered to save the rest of us money to keep their sorry lives alive.

There's NO cure for pedophiles/pedophilia except Death.

Cut to the chase, No jail, No medicines, No therapy, No castration, No psychiatry treatment, etc,

No More Excuses! No More Prey for these Diabolical, Methodical, Calculating, Maniacal,

Death Only! Bullet to the head, or rope for the throat. (rope is cheaper). They don't get caught their first time, and Nothing has proved effective, so let's stop sacrificing children to accommodate the "rights" of these Vile Creatures. This infuriates me. There's No Way to predict how many children have already been assulted (Raped,Molested) or are future prey due to just this one monster.