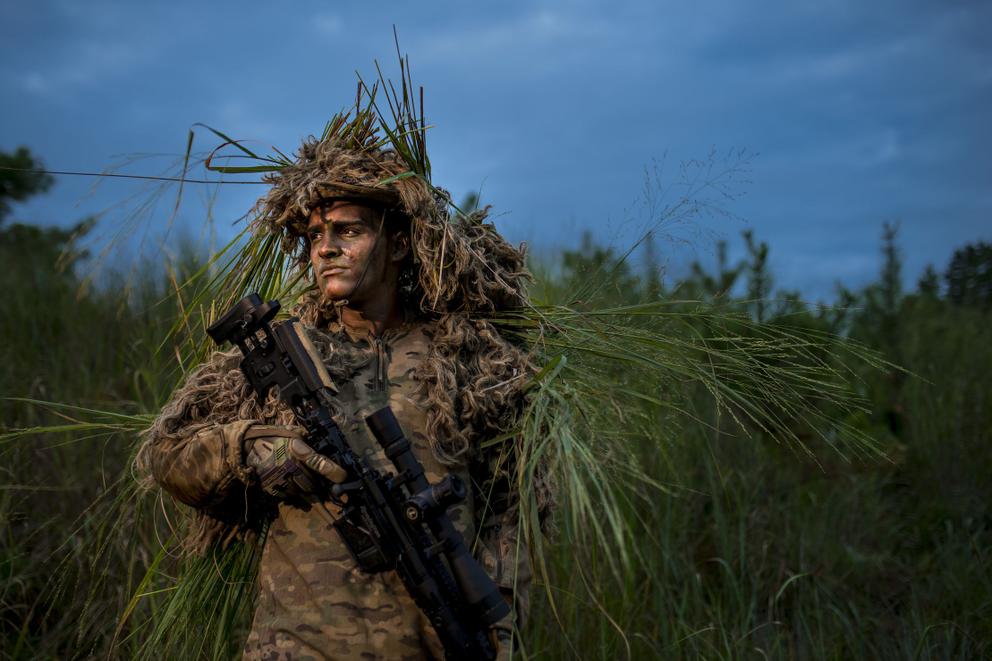 Take A Look At The U.S. Army's New Sniper Suit

The United States Army is always on the lookout for ways to improve its arsenal and give soldiers the best gear available. Now, they are on the verge of testing new specialized suits designed to let snipers approach their targets while blending into an unprecedented degree. The new suit has been dubbed the "IGS" for improved ghillie system and offers some serious advantages compared to its older predecessor. Don't worry, they still make the wearer look like a swamp monster.

The name "ghillie" comes from World War I when Scottish marksmen wore what they dubbed "ghillie" suits to blend in on the battlefield. Since then, the concept has been expanded and improved upon and is even used in hunting and not just it's deadly origination. They appear to be uncomfortable, and those who have worn them would agree, the suits are made of strips of cloth, fabric and plant-like materials. It's like taking your weed garden with you on the job.

Related coverage: <a href="https://thegoldwater.com/news/38548-Alaska-Soldier-Fighting-For-His-Life-After-200-Pound-Bear-He-Shot-Falls-On-Him">Alaska - Soldier Fighting For His Life After 200-Pound Bear He Shot Falls On Him</a>

John Plaster, the author of The Ultimate Sniper, has worn one and he says they are "hot, bulky, heavy–murderously heavy when wet." He goes on to describe the wearers' experience "stifling heat from layers of thick burlap" and says one must drink plenty of water to avoid heat exhaustion in their own ghillie suit, or should I say personal saunas? Plaster went on to say the suits are dangerous in other ways as well, "like an old Christmas tree waiting for a spark". Plaster recalls a story when a sniper's ghillie suit went up in flames in seconds after the spark from a smoke grenade caught it on fire.

These are all issues you don't want to be facing on the battlefield, so the Army is looking to improve the nearly century-old technology. The Army's latest suit is designed to tackle all of the issues mentioned above and they have selected three candidates for their final decision as to which suit will earn the title of the Army's new IGS. The Army's PEO Soldier program says that lab and field testing is set to begin in November.

The Army will be performing a variety of tests such as tests to see which suit reduces a snipers' infrared signature in night vision and how loud it is in the field. And of course, they will test its tear resistance and more importantly, fire resistance. The Army requested a material with a "lower burn rate" than Burlap that won't melt or drip. The three finalists will address the heat and weight issues by using more advanced and lightweight textiles that allow the skin to breathe and to let body heat out with a weight limit of just five pounds.

The system will be born over a standard U.S. Army field uniform and consists of leggings, a cape, sleeves, a veil, and all of the other essential components that soldiers will need. The trials for the IGS start next Spring and instructors at the U.S. Army Sniper School at Fort Benning, Georgia got the honor of being the suit testers. The Army is set to buy 3,500 of the suit that the army likes best and will equip its snipers service-wide. The future suits the U.S. Army has requested will feature technology that prevents the sniper from standing out in night vision and "chameleon-like camouflage using color-shifting nanotechnology fabrics" and "three-dimensional, continuously multidirectional cloaking."

Related coverage: <a href="https://thegoldwater.com/news/25735-Syrian-President-Assad-The-Agenda-Of-The-Deep-State-In-The-US-Is-To-Create-A-Conflict-Video">Syrian President Assad: “The Agenda Of The Deep State In The US Is To Create A Conflict” (Video)</a>

Some way say that suits such as the ones described above are already in action and have been spotted on the battlefield. One clip claims to catch soldiers wearing multidirectional cloaking or a similar invisible technology in a newscast in the Middle East.

The bizarre thing is the original videos of this clip have all been deleted it seems, only terribly quality, low-resolution ones exist making it appear like a simple trick of the camera. But the original quality video clips clearly showed a human outline moving in the video. This clip doesn't show nearly the quality I saw originally but it is still very strange.

Could the next IGS be invisible altogether?

As a former Ft. Bragger …

Any improvement should be met with caution. We have seen too many wild hair ideas that cost lives, instead of saving them.

So unless it is thermal blocking built- in it can be detected using a Thermal scope or camera costing less than $1000. eg. Leupold LTO-Tracker 6x Digital Zoom Thermal Imaging Monocular Black 172830 <$800. Or the Torrey Pines Logic T10-S Mini Thermal Imager50 Degree FOV9hzBlack T10-S <$500.

James, because you have 'little man syndrome', no chin, and a transparent self perception of a lack of masculinity, you continually overcompensate with ridiculous 'spray painted machismo'. you hide behind your ridiculous children's Halloween camouflage face paint, your stupid military baseball caps, and your PATHETIC moniker 'Major Burdock'. you couldn't run a mile if your life counted on it, but if confronted, you would run with your tail between your legs rather than stand up to somebody. your stupid military facade is predictable, and is a clear indication of your real inner self. You're a sissy. why don't you tell your readers about your big date with Philip the other night, holding hands in a Manila movie theater watching Venom, while you fixated on Tom Hardy onscreen, the actor who you always gush about being so 'sexy'.