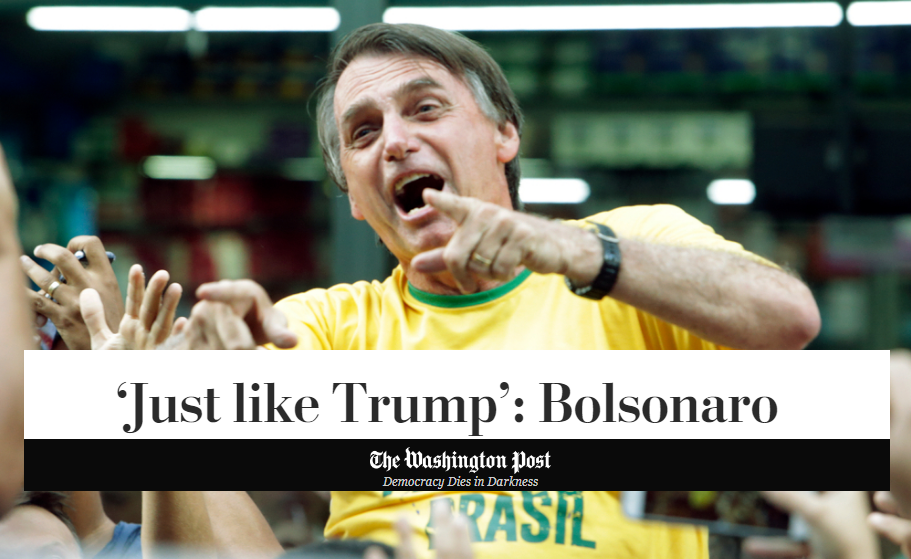 Two days before the ninth largest economy in the world (and the largest South American nation) goes to vote in the first round of a two-round election, the world press pulled out all the stops. Brazil’s Mr. Jair Bolsonaro was warned for both by the Huffington Post and the Washington Post in screaming titles.

Whereas South American stock markets have decidedly shown their trust in Mr. Bolsonaro’s election after a new poll showed him winning both rounds, the mainstream world media has not. This week reports in The Economist and CNN all failed to mention the large rallies held for him and only made a report about the women who decided to march against him.

Brazil, which has for years revealed in its image as a post-racial, left-leaning society is about to take a hard right turn.

In the current state of world elections, this is nothing new. As from the 2015 Brexit election, pretty much every major democratic vote has been won by a rightwing candidate.

But now Mr. Jair Bolsonaro, the rightwing evangelical outsider who claims to “love” US President Trump could be chosen to lead Latin America’s largest nation.

Just like Trump, Mr. Bolsonaro’s campaign is supported by his family. His 34-year-old son Eduardo said: “It’s going to be beautiful. It will be just like Trump in the United States.”

Voters at Bolsonaro rallies seem to agree that after decades of corrupt and imprisoned politicians, Brazil is ready for a change.

Mr. Danilo Monato, a 30-year-old teacher who attended the recent Bolsonaro rally, said: “He’s not the savior of the country, but to beat the communists in the Workers’ Party, he is the best option.”

Mr. Bolsonaro’s has crafted his campaign on a similar style as Donald Trump, and critics now admit that this is probably what helped him. The support from youngsters online will normally see him win the first round on Sunday.

Mr. Guilherme Casarões, a politics professor at a university in Sao Paulo, stated: “Five years ago, he was just another congressman with anti-gay views. Now Bolsonaro, like Trump, has become a larger-than-life figure.”

“Bolsonaro uses well-crafted rhetoric — his slogan is ‘Brazil before everything and God above all.’ He has been able to reach out to different groups of voters who feel abandoned by the political class. They are now blind to the negative things he says and does, and tend to overlook any aspect that speaks against their candidate.”

Furthermore, at the start of the campaign, about a year ago, Mr. Bolsonaro was seriously underestimated by Brazilian pundits who laughed off his candidacy. After the two-round election this month, it could be that the former army captain will have the last laugh.

President Trump is tightening his tie and ready to make some deals.

GOD BLESS THE POPULISTS OF THE WORLD AND POWER TO THE PEOPLE!!!

1Why do the heathen rage, and the people imagine a vain thing? 2The kings of the earth set themselves, and the rulers take counsel together, against the LORD, and against his anointed, saying, 3Let us break their bands asunder, and cast away their cords from us. 4He that sitteth in the heavens shall laugh: the Lord shall have them in derision. 5Then shall he speak unto them in his wrath, and vex them in his sore displeasure.

As the world awakens to the predatory ways of the socialist agenda. Marked by greed, division & hate, people have found that…

Gods grace & the way of the righteous is paving the road out for all these left wing deviants.

Hey! Globalist`s! Good bye! Good luck & give the devil a kiss from me when you get there. 8-) Hardeharharhar!