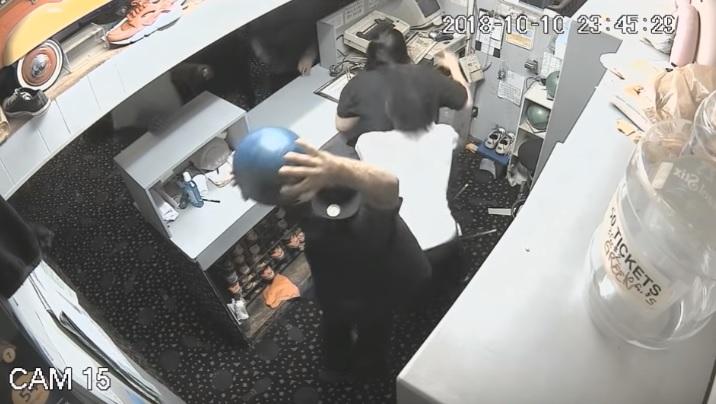 Police in Roseville, Michigan is looking for several black suspects who viciously assaulted a bowling alley employee. Roseville Police Department issued a public statement regarding the assault and information of the suspects. A video of the incident shows a vicious beating and a full overhead swing of a bowling ball to the back of the employee's head.

The whole incident was started by the black suspects according to the Roseville Police Department who said the bowling alley employee was forced to ask them to leave when they became unruly.

<i>On October 10, 2018, at approximately 1145pm a group of individuals were bowling at Apollo Lanes located at 29410 Gratiot Roseville, Michigan 48066. While bowling the group became unruly and began creating a disturbance and were asked to leave by an employee. Several members of the group surrounded the bowling counter where the employee was standing.</i>

<i>As the assault continued this same subject picked up a bowling ball and smashed the ball on the back of the employee's head. The employee fell to the ground and both subjects continued to kick the employee in the head prior to fleeing the location. The employee was transported to the hospital for treatment.</i>

<i>Suspect # 1: B/M, in their early twenties approximately 200 pounds wearing a black baseball cap, white t-shirt with a black short sleeve button up on over the t-shirt and black pants. This subject also had a close shaved beard and tattoos on his arms.</i>

<i>Suspect # 2: B/M, in their early twenties approximately 170 pounds braided hair wearing a white t-shirt and black sweatpants with white stripes on the side.</i>

<i>(Suspect #2 has been identified by detectives). Detective Scicluna is looking for the assistance of the other subject that witnessed the incident in identifying SUSPECT #1 listed above. Call 586 447-4510 or the front desk of the department at 586 447-4484. Roseville incident number 18-29003.</i>

The bowling alley says that the suspects became unruly and when the employee behind the counter asked them to leave they came behind the counter and beat him with a bowling ball. The violence of these thugs is disgusting to see when you consider how many of them probably have Obama phones while the poor Bowling Alley employee was just trying to do their job.

The unruly BLM NPCs began beating and kicking the bowling alley employee even after he had been knocked to the ground by the bowling ball attack. These suspects should be charged with assault with a deadly weapon since a bowling ball could easily kill someone if crushed on their skull.

If you have any information about the identities of these BLM NPCs please call the number for the Roseville Police Department listed above. They are dangerous and until held accountable for the vicious assault should not be approached.

How do you know they're BLM?

I hope these degenerates are skinned alive

We should look the other way here.

Because after all, they were likely Liberal-Democrat raised..