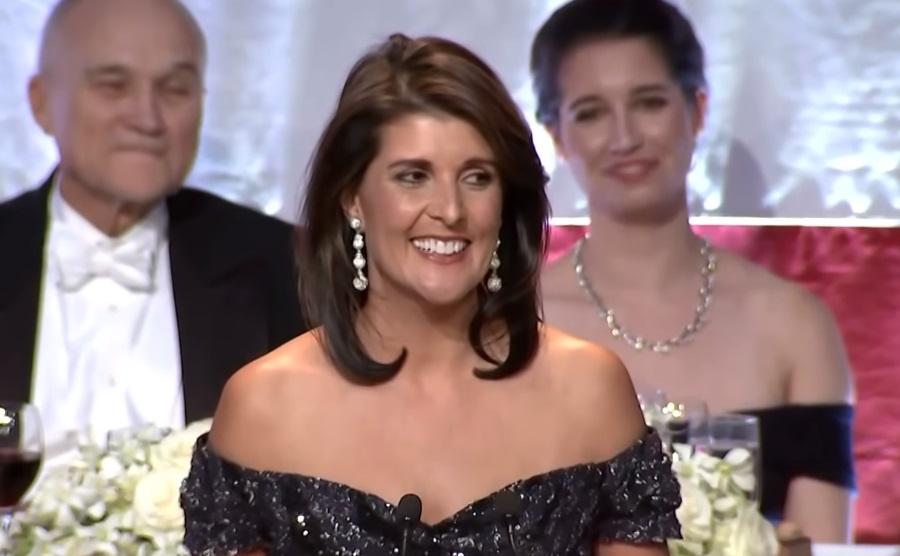 UN Ambassador Nikki Haley Introduced As "Next President Of The US"

Jokes and humor have always been present in the current administration, and outgoing U.N Ambassador Nikki Haley may have found herself in the center of one when she was introduced as the "next president of the United States" at a charity event. Haley joked about various things including President Trump, his rival "Pocahontas" (Sen. Elizabeth Warren), and other high-profile politicians. But throughout the dinner, Haley remained composed as ever, could she be considering a run for office?

The beautiful 46-year-old Haley could no doubt be just joking, but it almost seemed as if it was a precursor, or a little hint to get the rumor mills started. She stepped up with confidence to her new role as a comedian for the night saying, "Two years ago Trump was here and made some waves with his remarks, so last year you went with Paul Ryan, who’s a Boy Scout and that’s fine, but a little boring. So this year, you wanted to spice things up again."

Meanwhile, Haley heard about the rumor that she may be considering a run for president but she was quick to dismiss it. She told The Hill, "There was a fake story that I'm actually thinking about running for president. That is so ridiculous. It is way too early for anyone to be thinking about running for president - unless you're a Senate Democrat during the Kavanaugh hearings." Regardless of how sensitive the nature of the topics was, Haley pressed onward.

Her speech went on to encompass the president's feud with Warren, all for the Annual Alfred E. Smith Memorial Foundation Dinner. Haley didn't go easy on Warren herself either saying, "I get it, you wanted an Indian woman, but Elizabeth Warren failed her DNA test. Actually, when the president found out that I was Indian American, he asked me if I was from the same tribe as Elizabeth Warren."

Although Haley is stepping down from her post at the U.N, she will be keeping the job until the end of the year. She continued, "I really am super excited to be at the Al Smith Dinner. As a member of the Trump Cabinet, it is a thrill to be out to dinner without being harassed. Actually, the president called me this morning and gave me some really good advice. He said if I get stuck for laughs, just brag about his accomplishments. It really killed at the U.N.; I got to tell you.."

"I learned that the U.N. has 193 member nations, 180 of which are mad at us on any given day, and the most important thing I learned is that with all of our differences there is still one thing that unites all 193 countries: At one point every single one of them was paying Paul Manafort." The former South Carolina governor has been calling out rapper Kanye West and Trump's attorney general, Jeff Sessions.

Related coverage: <a href="https://thegoldwater.com/news/37864-Nikki-Haley-To-Iran-After-Terrorist-Aid-Accusations-Look-In-The-Mirror-Video">Nikki Haley To Iran After Terrorist Aid Accusations: “Look In The Mirror” (Video)</a>

Haley continued, "Jeff Sessions wanted to be here but he recused himself. Actually, I saw Jeff Sessions earlier today, but not in New York, I saw him on LinkedIn looking for a job. The Al Smith Dinner, a gala with white ties and the elite, was one of her first appearances since announcing she was leaving the administration on October 9th.

She has a drooping hooknose and a cartoon man chin. Not sure what part of that face you would describe as beautiful? Her character or role is separate, but to ascribe the word beautiful to an ugly face makes the adjective no longer have meaning.

There can be no other way in this world of deceit & lies.

Also pro gun control signing UN disarmament of us. Cabal only for runs for office non - natural born citizens (there are not born on us soil with a us mom and us dad). They are all manchurian candidates controlled by foreign powers (aka spys)

I could see her taking on the role of VP in 2020. That would piss the Lib's and Hillary off.