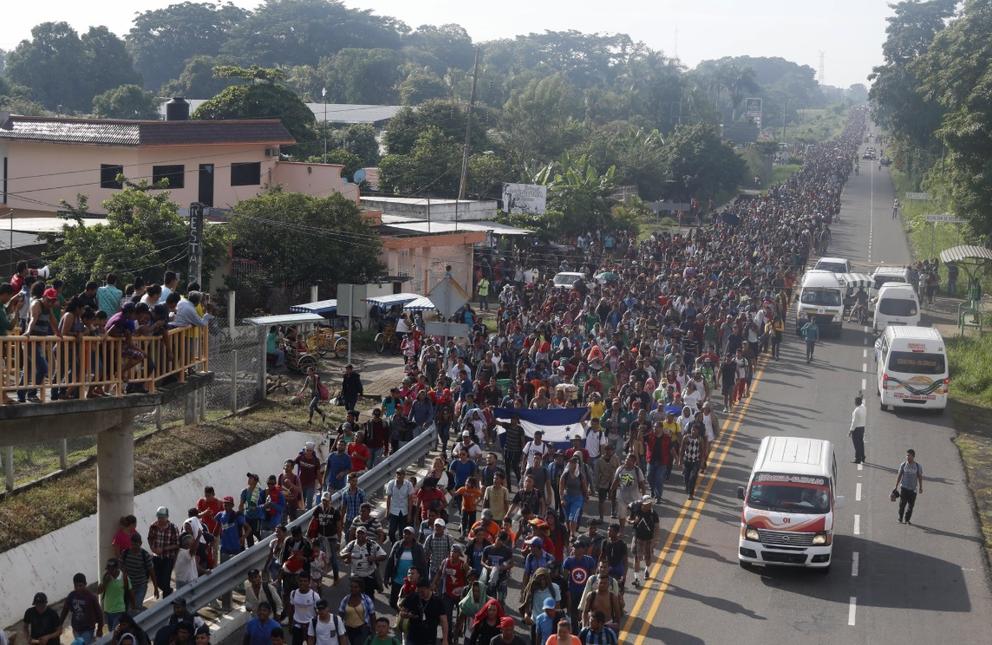 Migrant Caravan Resumes March To US As Numbers Reach 5,000

A massive group of migrants has formed a caravan after breaking through the Guatemala border fence into Mexico and each day their numbers swell. So far, the numbers of the migrant caravan traveling through Mexico have swelled to 5,000. The group has grown so large that they overwhelmed Mexican police and the government's attempts to stop them.

<blockquote class="twitter-tweet" data-lang="en"><p lang="en" dir="ltr">Mexico dispatched riot police to tackle hundreds of Central American migrants and asylum seekers at the Guatemala border, many of them children. The caravan is trying to reach the U.S. to escape violence and poverty at home. <a href="https://t.co/OgwPTGn1Rd">pic.twitter.com/OgwPTGn1Rd</a></p>&mdash; AJ+ (@ajplus) <a href="https://twitter.com/ajplus/status/1053376255196680192?ref_src=twsrc%5Etfw">October 19, 2018</a></blockquote>

At first light Sunday, the caravan resumed travel as they head toward their next destination of the Mexican town of Tapachula. The caravan takes up nearly the whole highway with about ten people standing side by side in a line that stretches back at least a mile. Several of the migrants have claimed refugee status in Mexico, and another 1,500 are waiting on the Guatemalan side of the Suchiate River for their chance to enter legally.

No one knows where the people of the caravan are coming from since it started with about 2,000 people and since setting out their numbers have nearly tripled. It seems likely that many people were waiting in the Guatemalan town of Tecun Uman for the caravan to form.

All types of people from all walks of life are in the caravan such as Besi Jaqueline Lopez of San Pedro Sula and her two daughters, Victoria, 4, and Elisabeth, 3. Lopez says she is a business administration graduate but could not find work in her hometown of Honduras. Lopez says her goal is to reach the U.S. but said she would settle in Mexico if she could find work there.

"My goal is to find work for a better future for my daughters," Lopez said. She and her daughters are making the trip with their husband and father David Martinez. Another migrant in the caravan named Olivin Castellanos is 58-years-old truck driver and mason from Villanueva, Honduras. Castellanos admitted to entering Mexico illegally after taking a raft across the river when the Mexico government blocked the bridge.

"No one will stop us, only God," Castellanos said. "We knocked down the door and we continue walking. I can do this," he said, pointing to the asphalt roadway. "I've made highways." Many other migrants with their own stories said they gave up trying to enter Mexico legally because the asylum application process was too slow and most want to get to the U.S. anyway.

The caravan initially began as a crowd at the Mexico border, but only a few small numbers were accepted for asylum processing, and some were given 45-day visitor permits. The crowd soon swelled to be too large for the Mexican police to handle, and they broke through the gate while others circumvented the bridge entirely in rafts.

24-year-old Honduran mother of two Sairy Bueso said she abanded the bridge and crossed into Mexico through the river. Her 2-year-old daughter had recently had a heart operation, and she clutched her to her chest. "The girl suffered greatly because of all the people crowded on the bridge," Bueso said. "There are risks that we must take for the good of our children."

<blockquote class="twitter-tweet" data-lang="en"><p lang="en" dir="ltr">This is the border caravan being handed cash to illegally enter the US<br><br>Who is funding this?<br>Who is behind this?<br><br>Someone is sponsoring the erosion of our border &amp; laws<br><br>Why is it fair they get to cut in line while immigrants across the rest of the world have to follow the law? <a href="https://t.co/UWG9bbNjOK">pic.twitter.com/UWG9bbNjOK</a></p>&mdash; Charlie Kirk (@charliekirk11) <a href="https://twitter.com/charliekirk11/status/1053047259552772096?ref_src=twsrc%5Etfw">October 18, 2018</a></blockquote>

Those who were lucky enough to be processed by immigration agents were bused in small groups to an open-air fairground in Tapachula. The Red Cross set up small blue tents on the floor of the fairgrounds for the families to live in while they waited to be processed. Some people say that the caravan was organized and funded by a group which even paid the migrants who made up the caravan. The rumor started after a video showing men in clean white clothes handing out cash to people in the caravan circulated online.

Mexico’s Interior Department has announced it had received 640 refugee requests by Hondurans looking to cross the border. The country's Interior Department released images of migrants getting off buses to receive food and medical attention. Federal police continue to monitor the caravan's progress from a helicopter and a few police units on the ground.

State Department Spokeswoman Heather Nauert said Saturday, "The Mexican Government is fully engaged in finding a solution that encourages safe, secure, and orderly migration and both the United States and Mexico continue to work with Central American governments to address the economic, security, and governance drivers of illegal immigration."

Are US citizens going to sit down and hope our government deals with this fucking invasion? Get off your PUSSIES and lets go! I'm heading down 2 days before they arrive and I will be ready to do whatever is necessary to fight this invading army.

Caravan 2018 = Today, America would be outraged if UN troops entered Los Angeles to restore order. Tomorrow they will be grateful! This is especially true if they were told that there was an outside threat from beyond, whether real or promulgated, that threatened our very existence….When presented with this scenario, individual rights will be willingly relinquished for the guarantee of their well-being granted to them by the World Government.” (Henry Kissinger, at the 1991 Bilderberger Conference held in Evians, France. 1991

The illegal we do immediately. The unconstitutional takes a little longer.

NAFTA “is not a conventional trade agreement, but the architecture of a new international system.” (Henry Kissinger, Los Angeles Times, 1993.

Look at that pic, that is not 5k people that looks more like 40k people to me. Drop white phosphorous and burn them alive. Kill em all!

All that garbage & filth left in the wake as well…

The closer they draw the more resolute they become. Until faced with outright hostility of action they won`t stop.

We can show them a few American pastimes before we get on to the lethal pastime of defending our land.

Such as Pumpkin Chunkin… Lob a bunch of pumpkins with those great big air cannons & trebuchets & tell them, go home, make pie & plant the seeds.

The next sport can be bowling for illegal invaders as we load up the black powder cannons.

Then it`s on to all the crooked politicians out to benefit from this.

YeeHaW! It is that time of year!

Though this invasion force of illegal aliens is anything but.

I agree enough of us won`t take this lying down.

BREAKING: Hurricane Willa grows to Category 5 force as it heads toward Mexican coast.