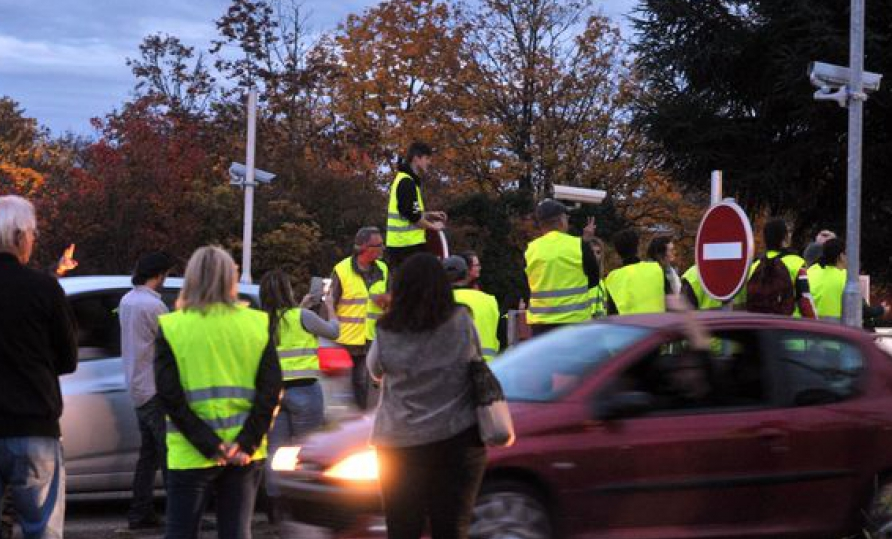 The first protests of the ‘gilets jaunes’ (yellow jackets) have started across France, meaning blocked roads and fuel pumps. A culmination is expected tomorrow when activists predict that the country will come to a complete standstill.

Prime Minister Eduard Philippe warned that the government will not tolerate roadblocks although it remains unclear whether police will be instructed to take action.

The movement was started two weeks ago by a 51-year-old piano teacher from Brittany, Ms Jacline Mouraud, who filmed herself damning the high fuel prices and put the movie on Facebook.

By now, 6 million French have seen it.

"President Macron? He steals our money, "she says viciously into the camera.

By now, Ms Mouraud appears everywhere on French television and the foreign press invites her for interviews. Tomorrow she will demonstrate, against President Macron and for lower prices at the pump.

50-year-old Mr Christophe Lechevallier from Limoges is a farmer. "The price for fuel for a tractor has risen from 50 to 87 cents per liter. That is huge, "says Lechevallier. That is why he personally organizes one of the many blocking actions tomorrow - and he is attracting plenty of attention.

French from various backgrounds are ready to block the country this weekend. Tomorrow, protests are being organized from north to south, especially to block motorways.

Some 750 events are already announced on the Facebook pages dedicated to it.

Diesel and petrol have respectively become 23 and 15 percent more expensive in France in one year. This is largely explained by the increased oil price, but in part by the taxes on fuel that were increased year after year.

More than 58 percent of the diesel price consists of taxes. For petrol, the number is over 61 percent. And as of 1 January 2019 these taxes will go even further.

The government has repeated over and over again in recent weeks that this policy will be maintained. "That is absolutely essential for a better climate and to reduce pollution," President Macron said at the beginning of this month.

But since then, the resistance has grown. So last week, knowing it had to act, the government claimed that lower incomes would be compensated for higher prices. The allowances for commuter traffic would be expanded and a premium put in place for people who exchange their old (polluting) car for a new (cleaner) car.

President Macron needs a turnaround. Only 30 percent of the French have confidence in him at this moment. That is the lowest score since he won the elections a year and a half ago. Measures like this, to compensate the price of petrol, have to turn the tide.

"If he did nothing, that would be seen as arrogance and contempt towards the daily worries of the French," said commentator Guillaume Tabard in French newspaper Le Figaro.

“And it would also have been a further encouragement for people to demonstrate on Saturday.”

The French saw how that fucking twat Macron insulted America and President Trump. The French know without the USA there will be no France. Watch the French go after that little sissy. Viva la Guillotine